I slammed down Cowgirl and immediately opened the bidding with a “Klik”, which was countered with a “Thwak” and to which I responded with a “Splat”. A “Twang” played by the other side brought us level again, which meant I could still win this. After a moment’s hesitation, the other side played “And” and immediately put down Wheel-Demon, closely followed by “Zooom”, giving them the leading bid. However, their unexpected move actually gave me the advantage. I put down “Kerunch”, which they countered with “Eeeek!!”, which I trumped with “Crrash”, which they… no… they couldn’t keep up. The bids were level, which meant I was victorious and was inching closer to victory with another two Heroic Echoic by Happyclash Games. 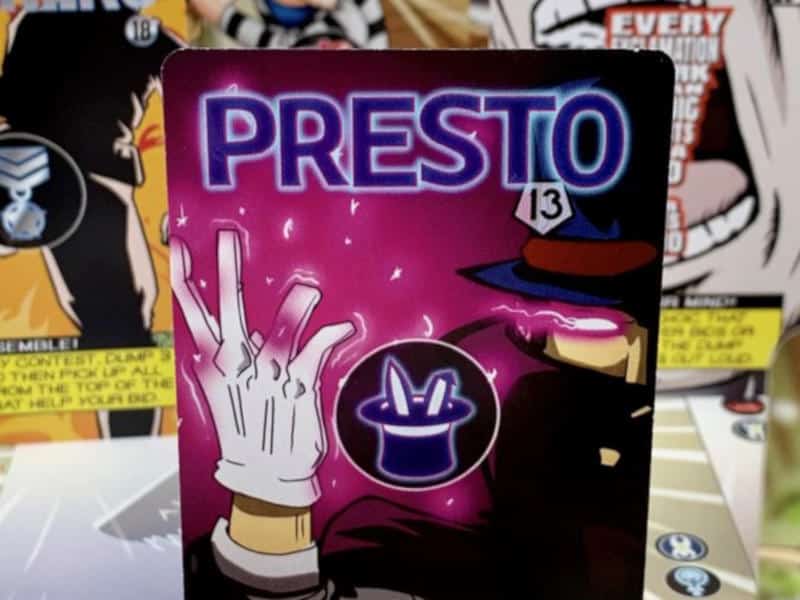 Card battling games are a lot of fun, but Heroic Echoic is a little different. You’re not pitting heroes against each other and playing fantastic combos to slowly wear down everyone’s energy levels until only one hero remains. Instead, you’re building your troupe of heroes by bidding on them. It’s sort of a prequel and I could imagine that the publisher creates a follow-up where you use the heroes you won to have epic battles with – maybe.

The game is the debut for the designer and is being self-published, which is always a huge undertaking, especially because it is not being funded via Kickstarter, unlike so many other self-published games. So hats off to that.

The rules are relatively straightforward, aiming to get you playing very quickly, with very little setup. After all, the game consists just of a deck of cards – a very large deck of cards, but a deck of cards nevertheless. It even deals with who goes first very fairly, rather than using some sort of thematic process. Everyone draws one card from the deck and whatever cards comes first alphabetically, that’s who goes first.

After that you have two choices – draw a card, either from the draw deck or from one of the six discard piles, or you play a card from your hand, which can only be a hero card or a specific action card. So analysis paralysis really shouldn’t be an issue.

The names of the cards are really creative, leaning heavily on onomatopoeias that we all know and love from superhero comics, and the hero cards are beautifully illustrated, again following a comic-book style.

The thing is, for the first five minutes or so, all you’re doing is drawing cards. After all, you can only play hero cards and there are only 27 of those in the 115 card deck. Also, you don’t want to play a hero until you know you have enough echoic cards in your hand that have a matching symbol, because you will use those to bid on that hero, so you need to make sure you have enough to outbid everyone else.

When someone finally does decide to play a hero, the bidding starts. Everyone can play as many or as few echoic cards, which have to show the same symbol as the hero and everyone can continue to add cards until everyone passes, at which point the person who has the highest bid gets the hero.

The echoic cards all show several symbols in their top left (and bottom right) corner. So every echoic card has the potential to be a bid for a number of different heroes. That’s great, giving each card some flexibility, but it also makes it very hard for players to quickly see how many bid cards they have for a given hero.

Fanning your hand to see the symbols doesn’t help much, if you end up with 30 cards or so in your hand, and the symbols don’t always appear in the same order, so you do have to look carefully to spot which cards you can use for a given auction.

I think that takes away from the fun. Auctions in Heroic Echoic are supposed to involve bluffing, but it’s hard to pretend you have lots of cards, when you have no idea how many cards you actually have that are valid bids. In fact, I was often resorting my hand at the beginning of an auction to collect all cards that I could possibly use for a bid, which would give the other players a good idea as to whether I had lots of bid cards or not.

When you win a hero, you put that card face-up in front of you and it can give you an immediate additional power, which is great. In fact, some heroes can be comboed together, boosting your bids or allowing you take cards from others. The problem is, that you rarely have enough hero cards in hand to decide which ones you want to put up for auction, which would otherwise allow you to play more strategically, aiming to get the right combination of heroes to help you win the game.

There are cards that allow you to put someone else’s hero up for auction or that allow you to add more heroes, either from your hand or from in front of you, to a running auction, which makes the game more interesting and potentially giving you a bigger choice of cards to use for bids.

As soon as someone wins their fifth hero card, the game ends, which I think is a good number and means games don’t last longer than an hour, with many games probably coming in below 45 minutes. So the game definitely doesn’t outstay its welcome.

Overall, Heroic Echoic is enjoyable to play and pretty to look at. It has a couple of interesting mechanisms that drew me to it in the first place and I will probably play it from time to time, but ultimately it’s not a game that really grabs me. However, it’s definitely a good family game that’s easy to teach, comes in a small box (it’s a deck of cards after all) and is therefore easy to take with you anywhere, and it is light enough that you can quickly play it as a filler in between other games.