With a loud “Bang!” the head flew off, followed by a “leg-splosion” that severed both legs, leaving only the body and the left arm. It wasn’t pretty. Yet, you knew you could turn it all around. There were still plenty of options. You just had to duck and dive and try and swap body parts with another robot to boost your own. You were sure that in the end you would be a Bots Up. 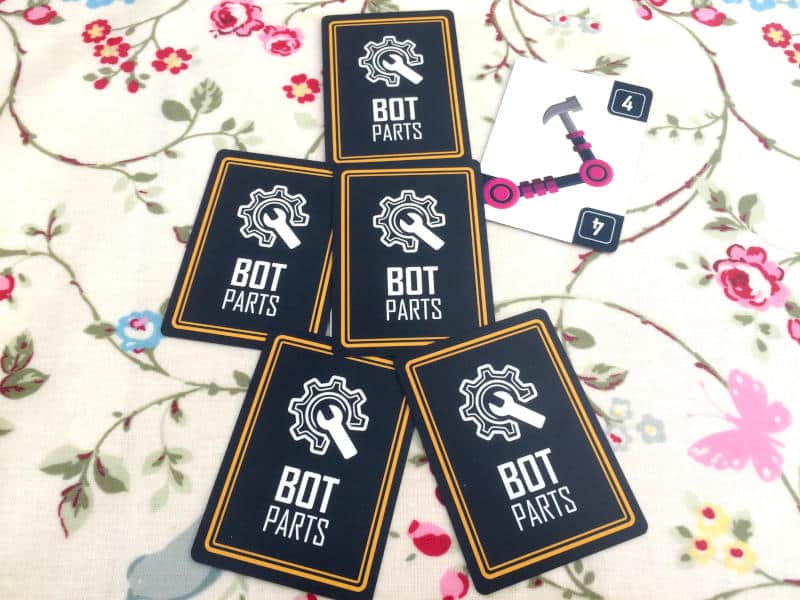 I know, the intro sort of sets the tone. Here is a really fun card battling game where pretty much every card you play will not only be an attack on the other robots in this battle, but will also deal damage to your own machine. The battle cards all have fun names that make it clear how devastating their effects are. There is “leg-splosion”, “bodily harm” and “head-secution” to name a few.

The whole game comes as a deck of cards, plus a handful of damage tokens, which means it’s really compact and can be taken with you pretty much anywhere. It’s also pretty easy to teach and learn and plays very quickly, which makes it a great game to have with you pretty much all the time, because you never know when you might be able to teach it to someone new.

Being a card game, there is a lot of randomness in Bots Up. When you first build your robot, you may not get all the body parts you need and you may be very unlucky and end up with many low quality parts that won’t resist much damage. However, that’s not a problem, because you can get more parts during the battle or even swap parts with other robots.

There is also a lot of luck in the battle cards you use to heal your robot, launch attacks, swap battle cards with others or carry out other actions. Again, you can be very unlucky and only have cards in your hand that would kill your own robot. However, once more it’s not an issue because you can always just not play any cards and simply draw more, slowly building up your hand. So the luck in Bots Up is much more about good hand management.

The only really swingy part of the game is the so-called “Power Play” which are cards you sometimes have to draw and play immediately. They can be amazingly powerful and possibly even win you the game or more likley, they’re devastating. Yet, “Power Play” doesn’t happen a lot during the game, so someone’s good or bad luck is really limited.

The fun in Bots Up comes from the fact that a perfect robot is more likely to lose. If your robot has no legs, then playing a “leg-splosion” card is devastating to everyone else and won’t harm your bot any further. It’s all about the timing here. You often hang on to certain battle cards, knowing that you’re about to lose the relevant body parts anyway, so that you can then play the card to its greatest effect.

The player interaction in Bots Up isn’t just in the attacks, but also consists of stealing other players’ cards. Sometimes you can choose the cards you want to take away from your opponent, sometimes it’s a blind draw – but in both cases, you won’t always get what you were hoping for.

I know some people really don’t like player interaction in games, but I always think when a game is all about attacking each other and being mean, then it’s fine, because nobody should feel bad for it. After all, everyone is doing it.

So I can highly recommend you take a closer look at Bots Up. You can watch my unboxing video to find out more about the components and cards, but I would say if you like a quick card battling game that’s fun for all the family, then you can’t go wrong with Bots Up.