Ensuring you can continue to stock the display cases with new exhibits, while also being able to pay your loyal and hard-working staff, is very hard. It is all about getting as many people through the door to raise income, as well as have a better chance of attracting funding to see you through another month. However, at the moment your museum isn’t in great shape and you need to expand to make room for more exhibits, which in turn should attract more visitors. Well, nobody said it would be easy in Curators: Collection Conundrum by Worldshapers. 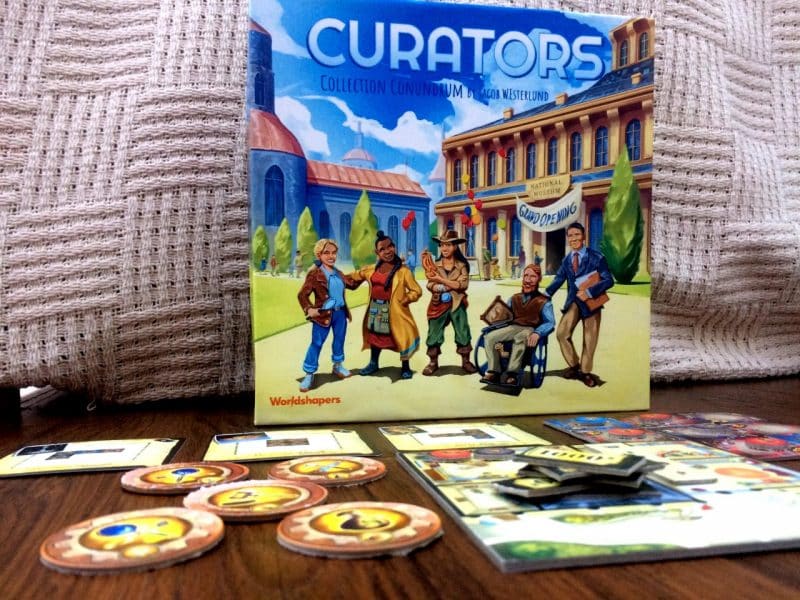 It is interesting to see a game that puts you in the shoes of a curator for a “not so wealthy museum”, as it says in the description. The theme alone will spark interest for many people, especially given how popular excavation themed games seem to have become. Add to that the fact that Curators is a polynomial tile-laying puzzle with an interesting action selection mechanism and a small amount of resource management, and you get a game that will be suitable for a wide range of people.

The art by Emilie Vaccarini Francis and Niklas Wallén is also really lovely, giving the game an almost graphic novel feel. That feeling is enhanced by the fact that one of the actions you take is the archaeologist, who is represented by the well-known fedora hat worn by a famous, fictional explorer who appeared in many films and TV series. Yes, that one.
The game also won the Board Game Workshop Design Contest 2019, which means it came first out of over 100 entries. That’s quite an accolade.

The gameplay is the usual mix of asking one of your employees to carry out their work. Your carpenter allows you to extend your museum with a few more rooms, represented by polynomial tiles. You can also send out your (famous) archaeologist to recover artefacts from an archaeological site, or you can ask your collection manager to buy artefacts from the auction house. Your researcher will then be able to prepare those artefacts for public viewing and put them into a display case. Finally, your financial manager can collect money based on the number of visitors you have attracted.

So far nothing new. What is clever about this action selection mechanism is that every employee is double-sided, representing two roles they have within your museum. After all, you don’t have much money, so you need to get everyone to be multi-skilled. So once an employee has carried out their work, they get flipped over and are now ready to fulfil a different role.

If, at any time, you have two employee tokens that display the same role, you can put both into action at the same time, thereby making the action twice as strong. That is a mechanism I hadn’t come across before, and it makes for a really interesting puzzle. You are constantly trying to chain your actions so that you eventually have everything in place to double them up. However, it can also create a situation where none of your employee tokens show the action you need on your turn, forcing you to take a different action, thereby delaying you by one turn – which can really slow you down.

That puzzle alone isn’t enough though. You also have so-called contract cards that want you to expand your museum in a certain way. The polynomial sections you can add to your museum are divided into squares of one of three colours. So you need to take the right shape with the right colours and line it up with your existing tiles, so that the picture on your contract matches up with your museum. It’s quite tough for people who aren’t very good with this sort of spatial puzzle, but I really enjoyed it.
Curators really is a mix of puzzles that you need to keep control of.

Chaining your actions correctly is vital, but you also need to ensure you expand your museum at the right time, before another player takes the tile you so desperately needed. It’ll keep you busy, for sure.

The only concern I have with the game is replayability. I played it a few times to see how things change from play to play, and of course, the first game was a learning game. However, after that, the only variability came from the contracts you were dealt at the beginning of the game or that you drew during the game and the order in which the tiles were placed into the shared market. The rest seemed to be a matter of developing a strategy for chaining your employee actions efficiently to get as many double-ups as possible. If you were able to do that, you would do well in the game.

Yes, there are some tactics required when other players clear out the auction house of the artefacts you wanted or buy the tile that you wanted for your own museum, so Curators can be quite high in player interaction.
However, overall the game is really enjoyable. It’s relatively easy to learn and once you have played a few turns, it flows really quickly. It plays really quickly actually, so playing two or three games in one session isn’t difficult. I would recommend you have a closer look at Curators and see for yourself what you think. It’s definitely worth it.

It will be on Kickstarter very soon. You can sign up for notifications on the preview page here: https://www.kickstarter.com/projects/worldshapers/curators?ref=revo15