The four armies have landed on the beach of the abandoned island and deposited their troops with intent. They are here to claim their stake and become the new rulers. Yet, battles are rare. The invaders mostly compete for majority, tolerating their opponents’ presence, while brave cohorts cross the seas to reach neighbouring islands in this tiny archipelago. Cities are built to establish a permanent presence, but it doesn’t take long until it is all over. In Eight-Minute Empire: Legends by Red Raven Games, you and up to three other players try to manoeuvre your armies over eight to eleven rounds to come out victorious. 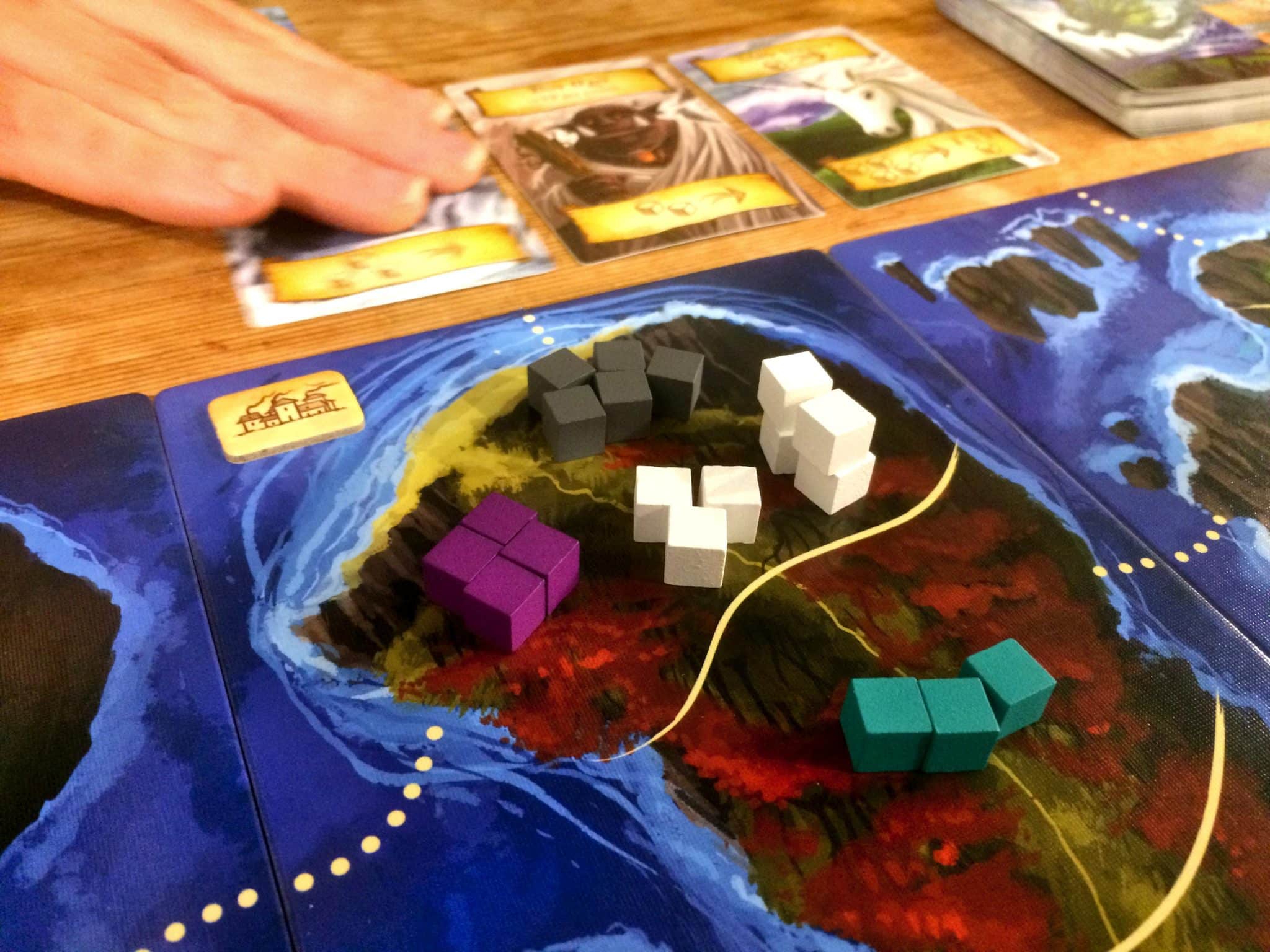 Here is another beautifully illustrated game by Ryan Laukat. The style is very similar to his other games, even though I would say it is a bit edgie. In any case, the gameplay itself is quite different to other Red Raven Games, except to Eight-Minute Empire of course, which is its predecessor. Mind you Eight-Minute Empire: Legends is not an expansion. It’s a completely independent game, which has taken the predecessor’s gameplay and rules and improved them, tweaking a few things here and there. The overall game length has increased, so getting a game into the eight-minute target is virtually impossible.

Let me talk about the gameplay itself though, so you can get a feel for what the game is like. In front of you is a map divided into a number of islands, some of which are further divided into regions. Your aim is to have most tokens in each region, as well as control most regions on the islands, all of which gives you points – and we all know what points make. There are more ways to score a few more points, and in the game each individual point is hard fought for. It is not unusual that winning and losing end game scores are separated by only one or two points.

On your turn you take a card from a tableau of six cards, each of which gives you some sort of overall bonus, plus an action that you carry out immediately. So over time you increase the strength of your actions and the potential to gain points, which means that, as the game progresses, you feel more and more powerful. However, the problem is that cards get more expensive from left to right, and you only have so much money to spend overall. You really want to invest all your coins before the game ends, yet you don’t want to not have enough money when you need to buy a specific card. It’s a really tough balancing act that you need to work out.

The choice of actions basically consists of moving your armies between regions, or from island to island, but the latter is much more expensive. You can also deploy new armies or build cities where you are already present. Cities cannot be moved, but they also cannot be destroyed, because another action is removing an army from the board. That’s basically it.

It sounds simple enough, but given that you only have so many turns, the game is over really quickly and you really have to make every turn count. At the same time, all the other players are responding to your actions and buying cards, which may include the perfect card for your next turn. The game isn’t too thinky, because your actions are restricted by the cards that are available to you and the amount of money you have left, yet there is enough left for a more serious gamer to think about and enough decisions left for people to make. Yet, it’s really simple to explain, so worth trying out with people who have just started out in the hobby and want to look at slightly heavier games.
The setup of the game is always a little different, with the variable and double-sided map tiles, so the island group can be different all the time. The box also comes with a lot of additional tokens that you can add to your later games. So there is plenty of replayability to keep you interested for a long time, and the game length and complexity is perfect to finish off a games night.