The sun is high in the sky, shining directly down onto Main Street in this ramshackle town of wooden buildings. The heat is almost unbearable, if it wasn’t for a light breeze that is creating small swirls of sand and dust. You have to squint in the bright light, as you stand outside the saloon waiting for the clock to strike twelve. A speck of dust makes you blink, which doesn’t bode well. You need to be able to see your opponent clearly, so this won’t do. You step away from the saloon and try and position yourself in a more sheltered spot, where dust will be less of an issue and there is more shade, making it easier to see. Yet, this duel is different. You actually have to face off several people in this Six Gun Showdown, and you also have to play your cards right to make sure you come out victorious. 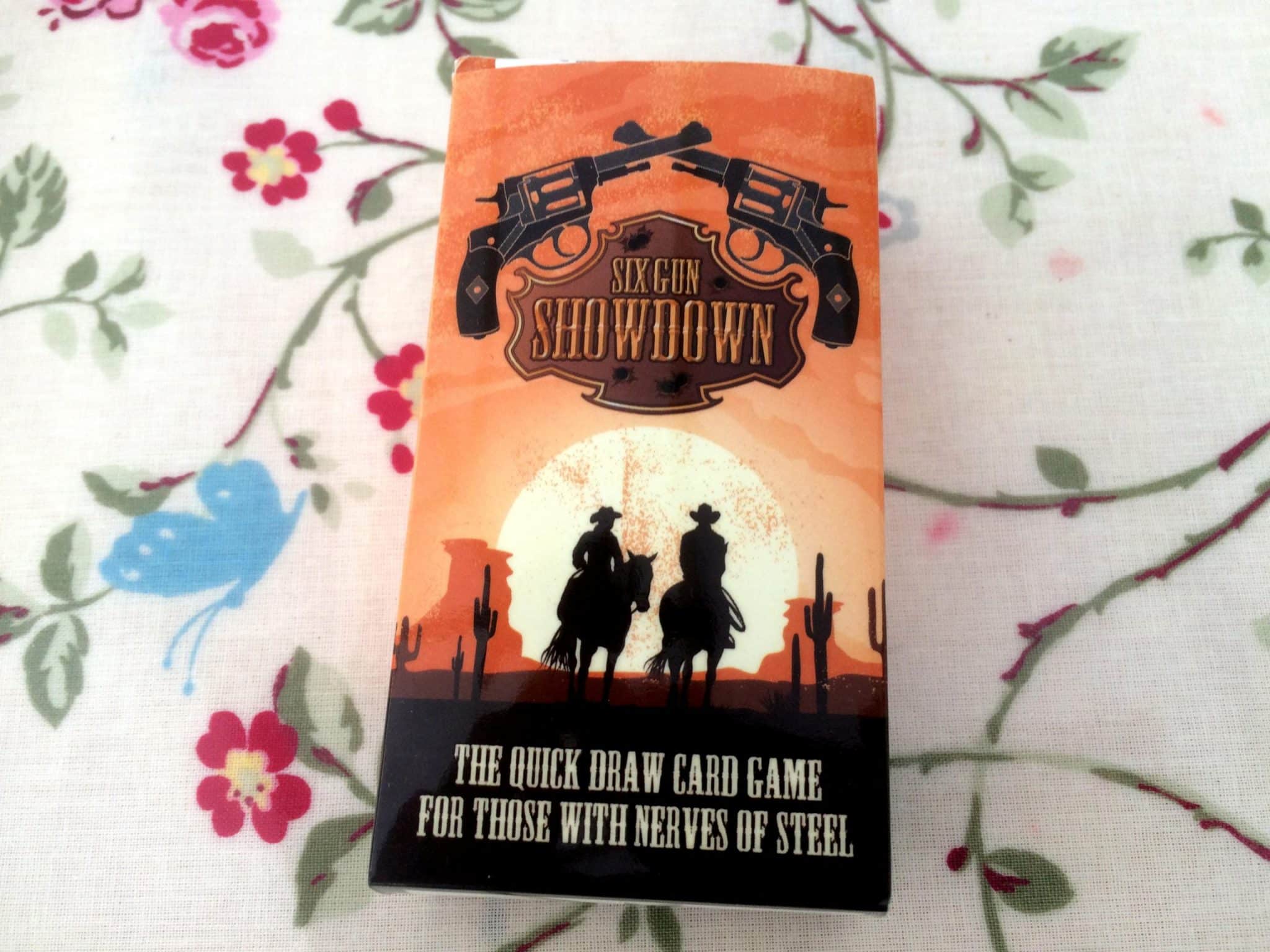 There is Ezekial the cowboy, Lucky Jo the drifter, Desperado Daisy, Sheriff Jones, Madam Dooley and yourself, Gene The Kid. As you watch your opponents walk along Main Street, finding their own best possible spots, you carefully select your hand of cards that you intend to use in the first round of this best of three shootout. Your first card will be a blue focus card to increase your accuracy. You then play a distraction card, in the hope to slow down your opponent. You also select a bluff card, so you can target a specific player’s accuracy. You then decide to also choose a flinch card, hoping that your opponents will draw in return. The last two cards are draw cards, which will trigger the shootout.
Suddenly you hear the town clock. The shootout will begin when it strikes for the twelveth time. You hastily put your six cards face down in front of you, as do your opponents, trying to remember what you put where, because it will be vital for you to reach for your gun at the right moment. Then, as the clock strikes twelve, you reach for your first card, but you’re too slow. One of your opponents gets there first and reveals a focus card. Dang, that was what you were hoping to play yourself.

The next player follows suit and also reveals a focus, and so does the third player. You follow their lead and do the same. Players five and six copy what everyone else has done. As you look at the revealed cards, you can see that your accuracy is not high enough quite yet. You urgently need to get to your distract card to level the playing field a bit. Yet, it’s not your turn and you can only hope that the next card played isn’t a draw card.

You’re in luck. The next player has gone for a bluff card, the next player after that for a reach card, improving their speed. You choose your draw card, then the last three players reveal their cards: distract, focus and… no… it can’t be… a draw card. Everyone reaches for their own cards, some getting there in time, others don’t. Next everyone throws their dice, hoping for bullet holes or at least high numbers, yet some opponents fall by the wayside as they only roll a bullet. Everything happens very quickly and you only realize too late that you have been hit – but you know that you have also hit your opponent, so it’s not all lost.

Suddenly everything becomes silent again. Players collect their thoughts and discard their revealed cards, before putting the other cards back into their hands to choose the next set of six cards to play face down in front of them. The next round will most likely be decisive. You need to make sure you score to come out victorious, yet you have already used up most of your best cards. What’s left won’t be much help. You have to trust your dice to bring you victory – or hope that the third round will be the winner for you.

Six Gun Showdown by Redwell Games is a great little card and dice rolling game. It takes only five to ten minutes to play, so is ideal as a starter for your games night, as you wait for everyone to turn up, or a quick battle at the end of the night – or maybe even as a tiebreaker, if necessary. The rules are really simple and you can’t take the game too seriously, or you will forever argue about who touched what card first. It is meant as a light, fun game, and if you take it that way, you will have a lot of laughs and a lot of staring down your opponents.

The game is currently on Kickstarter, and the price is spot on for a game of this type. In fact, it’s a no brainer really, because you get a lovely deck of cards and custom dice of good quality. So have a look and see for yourself, but I’d say it’s worth supporting.