It was 2100 and the construction of our gigantic project had begun. We were trying to tackle overpopulation and rising sea levels. Recent advances in technology had enabled us to build higher and stronger buildings that could house more people. We were also able to build on the water, using immense floating platforms as foundations for these wonderful structures. It would take time, but eventually, we would be able to complete our first MegaCity: Oceania by Jordan Draper and Michael Fox from Hub Games. 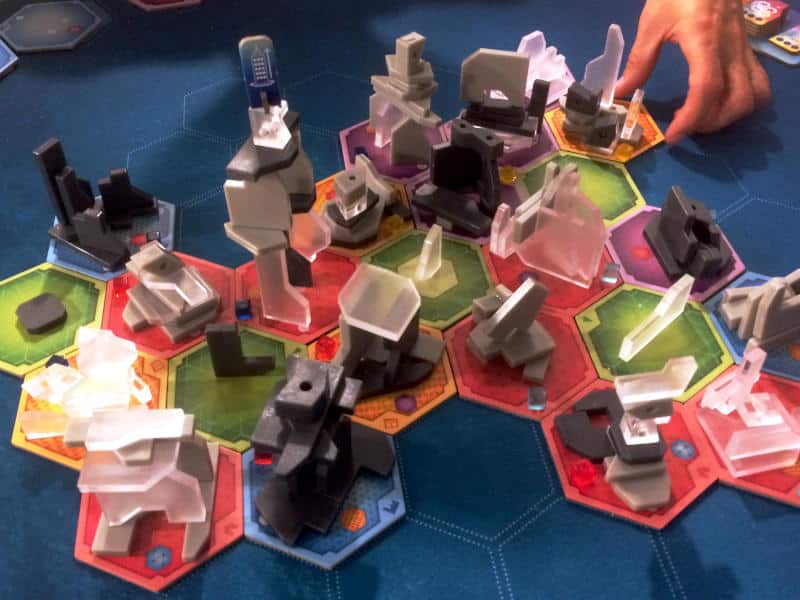 It’s a tall order indeed, but you have been chosen to take on the role of one of these futuristic architects and build modern skyscrapers, the world has never before seen. Acquire the right number and types of materials dictated by strict blueprints and then erect structures on hexagonal cardboard platforms, which you will then have to carefully manoeuvre into place. You will need a steady hand to ensure your building doesn’t collapse on its journey to join the megacity in the centre of the table.

MegaCity: Oceania is a mix of luck, resource management and dexterity. There is also a sort of real-time element to it. It sounds like it should never work, but it somehow all comes together to create a really interesting and exciting game – but let me explain.

In the game, you will be randomly drawing plastic shapes from a bag, choosing hexagonal platforms and selecting contracts that will hopefully all fit together. That’s the luck and resource management part of the game. The by far largest part is the dexterity though. Once you’ve got everything you need in front of you, you will place the plastic pieces on top of your chosen cardboard platform and arrange them into a building that meets the contract’s requirements. Ideally, you want to build high, because it gives you extra points, but you also need to build sturdily.

Creating your structure already requires a steady hand, but the game pushes it to another level, because once your building is finished, you need to push the hexagonal platform into the centre of the table to join it up with whatever hexes are already there. That’s easier said than done and will heavily depend on the surface you’re playing the game on.

If you have a wobbly table or maybe one that’s slightly sticky, successfully connecting your cardboard hex with the slowly growing megacity without the building collapsing is going to be very challenging indeed. I strongly recommend you either play on a smooth tablecloth or some sort of neoprene mat. I bought the game mat to go with the game, but you don’t really need that. Any surface that’s smooth and allows the cardboard tiles to slide easily will do.

As I mentioned, there is also a sort of real-time element to MegaCity: Oceania. When your turn is over, it’s not actually over. You are supposed to build your structure while it’s someone else’s turn and you can only add your building to the megacity when it’s done and you’re not allowed to finish your structure during your turn. You have to be ready when the round comes back to you.

That creates a bit of pressure, but also means turns sort of overlap. Nobody will sit around idly. Nobody will be bored. Everyone will be busy stacking plastic pieces on top of each other and trying to construct something that fulfils the sometimes really hard-to-achieve requirements of the contract they’re trying to fulfil. It can feel a bit frantic at times and when rounds go really quickly, because everyone is building, you end up just drawing more pieces, just so that you have taken your turn and can focus on finishing your structure again.

MegaCity: Oceania can also sometimes feel like a multi-player solitaire game, when everyone is just focused on their own construction work. While one player has finished a building that is going to be taller than everything else in the megacity so far, everyone else still has their head down. However, you just have to make time and watch with bated breath while that player carefully pushes their new megastructure into the middle of the table and manoeuvres it around other buildings to connect it to the floating city in a way that gives them the most points. Just bear that in mind and make sure everyone gets the recognition they deserve for creating a wonderful building and don’t just get caught up in what you’re doing.

The floating city starts out as an empty Central Park tile and slowly grows as more skyscrapers are added. At the end of the game, the megacity you all built together just looks really impressive. You can’t deny MegaCity: Oceania‘s table presence. It’s visually very pleasing and will remind you of your childhood when you built structures out of wooden blocks. You can’t help yourself but want to take pictures of the end result.

The game is also very tactile, by its nature. It’s a joy to draw more plastic construction pieces from the cloth bag. They have a lovely weight and feel nice in your hand. It’s so much fun balancing the tiles on top of each other and seeing how a new building slowly rises up right in front of you. Even the cardboard platforms have a good thickness and weight to them. It all comes together nicely and just feels wonderful.

MegaCity: Oceania can feel a little long and towards the end, you tend to run out of building platforms that fit the contracts you have. Some turns are just you resetting the platform hexes in the hope that you get something you need. It’s like a little lull near the end, but when you get your last building placed in the city, it feels great.

It’s the sort of game you probably only want to play once and then put away for a while, before getting it out again and playing it once more. The dexterity element mixed together with the game’s visual appeal makes MegaCity: Oceania an evergreen for me. I don’t think I’ll play it a lot, but it scratches a certain itch that no other game can.