It was going to be a real spectacle. The crowds had gathered to watch the masters at work and battle to the bitter end. Only one of them would survive. Then, as the match was about to begin, everyone hushed and an eerie silence filled the arena. It was time for the combatants to throw their dice and Str!ke by Dieter Nüßle from Ravensburger. 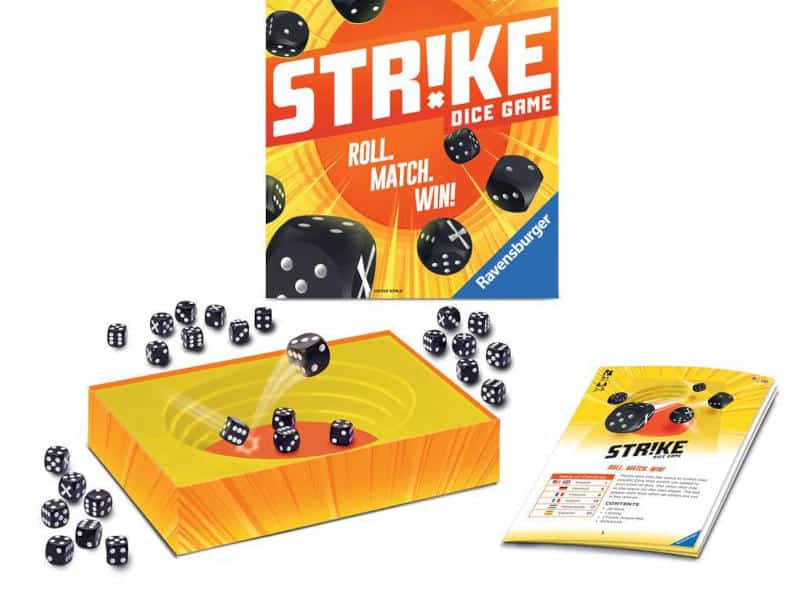 Yes, welcome to the arena. You are one of the fighters in this mortal dice combat. If your luck is on your side and you roll your dice with skill, you will be victorious and leave your opponents in the dust. It’s everyone for themselves. Some of you will whisper to your dice before you throw them into the turmoil, while for others it will all be about concentration and mental strength. Some of you will just let the dice speak for themselves.

All right, Str!ke isn’t actually all that serious. After all, you’re literally just selecting a number of dice from your pool and throwing them into the game box, which holds a little plastic amphitheatre that is cushioned with a little foam mat. You can try and hit some of the other dice already present to maybe give yourself a bigger chance to win, or you roll them gently to ensure they don’t bounce off and get removed from the game.

Once the dust… erm… I mean, the dice have settled, any matching dice are taken out of the arena and added back to your pool. Any dice with an X result are removed from the game. If there are no matching dice, you can choose to try again, or you can pass.

If you end up with no dice at the end of your turn, you’re out. The game keeps going from player to player until only one of you has dice left. That’s it. That’s the game. As I said, it’s not all that serious.

Even so, emotions will run high. If everyone gets into the spirit of things, you will be cheering on your dice and tempting other players to keep risking more of theirs. You will boast that your dice are the best when you manage to make them all match and clear the arena completely – and you will curse if the previous player does it to you. It’s certainly a lot of fun.

Str!ke is very quick to teach, easy to learn and very quick to play. Anyone can play it, provided you can pick up and roll a bunch of dice. It’s the sort of game that you can easily fit in at almost any time. The box is a bit big, given that it basically just contains a bunch of dice and a rulebook. That makes it not quite so easy to carry with you in your coat pocket. You will need to put it in a rucksack or bag. However, the box doubles up as the arena. It couldn’t be any smaller or rolling your dice into it would have become a bit too hard.

There isn’t any more to say about Str!ke, except maybe that you should give it a go when you get the chance. It’s a game of hilarious dice rolling and silly fun. As the box says, just roll, match and win.