It was hard to get the favour of the Emperor. Many noble houses were vying for their attention by offering their resources and manual labour to help restore the Emperor’s wonderful monuments. As a way to remember the work everyone did and to honour the grace and power of the Emperor, artists were commissioned to create beautiful paintings. It was your hope to catch the Emperor’s eye and receive the ultimate recognition: being invited as a guest at the Eternal Palace by Steven Aramini from Alley Cat Games. 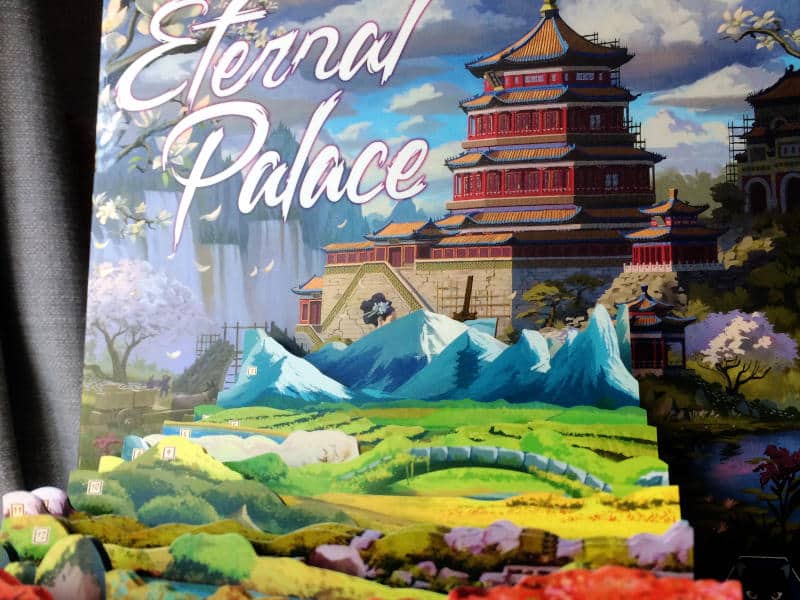 In many ways, Eternal Palace isn’t different from many other dice worker placement games – except for one thing: you group dice together at the beginning of each round and those groupings cannot be changed later. So from the get-go, you have to make a choice: use every dice singly, which gives you more turns during the round, or group them together in twos, threes or more to get access to more valuable worker placement slots, but then accept that you will finish the round sooner. That’s a tough decision to make early on.

Eternal Palace, like many other worker placement games, offers a lot of action slots. There are 12 basic ones, plus three more special ones. Some locations require you to spend resource, which you can collect at a related action space. So there are some dependencies and you sort of want to know that from the start to make sure you play most efficiently.

That’s difficult in a first game though. The whole board is really quite overwhelming. So my recommendation is to explain the basic rules and then just start playing. Just focus on how you group dice at the start and how you can manipulate pip values. Also point out that worker spaces can be used by multiple players, even multiple times by yourself, but you have to pay for going somewhere where there are dice already, including your own.

If you try to explain every rule and every action space, you’ll be there after half an hour and people will probably have forgotten some of the things you explained at the beginning. The game probably only takes about an hour, depending on player count, so don’t waste 30 minutes trying to explain everything.

Speaking of time, setting up the game already takes a while.

There are over a dozen painting layers to assemble during the game. There is a custom plastic container that holds these layer and doubles up as a stand for them during the game. The problem with this is, that taking those layers out and lining them up on top during setup does take a fair few minutes – and similarly, sorting them all out afterwards and putting them back isn’t quick either.

There are also a number of small, square cardboard tokens that represent so-called “feature layers”, which have to be placed in certain locations on the board. You then also have to place the four monuments on their relevant spaces. In the deluxe version of the game, these are 3D plastic miniatures. In the basic version they are square cardboard tokens instead, which work just as well as the miniatures functionally.

On top of that, players have to place two of their dice on the board, as they gain them later in the game and then put discs in their player colours onto specific places on the board.

It all takes a while and even though you get quicker over time, it’s still not super quick. It also feels a bit fiddly. Using small storage boxes for the resources certainly helps a lot, unless you’re happy to just dump everything in one big pile somewhere in the middle of the table.

Eternal Palace is absolutely gorgeous though and has a real table presence. I mean, the wooden resource tokens are wonderful. Every player gets a cardboard easel on which to display their painting. You add painting layers to a backdrop as the game progresses. The final painting is something you want to show off to other players. You probably also want to take a photo of it at the end of the game. It’s really lovely.

Overall, the components are really good. The cards are maybe a little thin and will bend a little, but then that helps with picking them up from the table. They have a linen finish though, which makes them feel nice in your hand and which means the cards don’t slide about.

The artwork on the game board is also lovely, even though it is very busy. It could have done with tidying up a bit to make it easier to see where action spaces are and what they relate to. Similarly, the iconography isn’t completely clear. Pretty much everyone I explained the game to thought that the brush icon was supposed to be a knife. The icon to move forward on the Palace track was also usually confused with the Spring Pavilion monument. They’re both a pagoda.

So, yes, it’s a really beautiful game, there is no doubt about it. However, it could have done with a bit of tidying up and smoothing off the edges a little.

Eternal Palace is a dice worker placement game at its core, but it’s a very family-friendly version. Worker placement slots can be used multiple times, even by multiple players. All you have to do is pay a certain amount of “fish” to use a space where someone else or you have already been. Similarly, dice luck can be mitigated with “wisdom”. It even allows you to wrap around from 1 to 6 or 6 to 1, if needed.

Fish and wisdom are also pretty easy to come by during the game. So unless you’re really unlucky, you can always use any worker space you want and change your dice to the values you need. There are also 15 worker placement slots available. So even if every player uses each dice individually, you will probably always find an empty place, even in a 5-player game. I would strongly recommend you play with four other people to get a much more cut-throat experience, but even then it’s not a struggle to do the action you need.

In fact, I often ended up going to the same worker spot multiple times, paying fish in the process. It’s usually not a problem, as you will often get fish as part of an action.

The reason for going to the same action slot multiple times is that Eternal Palace is a kind of race game. Pretty much every worker placement slot has a track related to it. Get to the top first and you get an extra victory point. Some slots don’t have a track as such. Instead, if you’re the first to go to that location twice, you also get an extra victory point. So, yes, it’s pretty much all about getting to the end of the tracks as quickly as possible.

Also, the game end is triggered when someone gets their eighth painting layer. You only get those layers when you reach the top of those tracks and it doesn’t matter if you’re first. Painting layers are worth a point. Getting to the top of a track first gives you a “feature” layer, which is also worth a point.

So, whatever you do, you will probably go to the same locations several times during the game. It’s the main way to score points. So there is no way around it.

Going back to my comment about the set-up taking a while due to the painting layers, it’s especially frustrating because they could have been replaced with numbered cardboard tokens. The easel and painting layers are ultimately a gimmick that slows down the game. Yet, it all looks gorgeous. As I said, you will feel the urge to take photos of your final painting at the end.

Eternal Palace is a medium-weight family game, maybe at a similar level as Ticket to Ride. It looks gorgeous and the easel and painting layers will be the main draw for a lot of people. Once you have played it a few times, you will get quicker. We can now play a 3-player game in 45 minutes, which excludes setting up and putting away though.

There are also a number of mini-expansions you can add to Eternal Palace, but the base game alone will keep you happy for quite some time. Yes, it will feel a bit repetitive after a few games, just like Ticket to Ride. At the same time, it’s the sort of game you will play a couple of times, put away for a bit and then get out again.

Now, saying all that, there is one thing that I think is important to mention: the setting of Eternal Palace. I don’t know for sure, but it feels like it’s supposed to be either China or Japan. I would be tempted to say it’s the former, but it’s not clear. I’m certainly no expert on these countries’ cultures to make a call. There are mentions of an emperor, the monuments include a pagoda and a bronze bull, the advisers look like they’re supposed to be from the Far East and everything else gives the impression that this game is supposed to be set in one of these two countries.

However, there is no mention anywhere in the rulebook of a cultural consultant. There is also no mention that the artwork and other references were created by someone who is familiar with the culture of wherever this game is supposed to be set. I think that’s a real shame. It leaves me wondering how accurate the depictions of the characters and everything else are in the game. I am unable to say if Eternal Palace is yet another game created by a European publisher that uses another culture as a backdrop without any consideration. It is possible that Alley Cat Games had someone on the team who guided the design and production.

I have asked the publisher for comment, but by the time of writing, haven’t had any response.

So as it stands, I can’t tell for certain what guidance the publisher had on the cultural sensitivity of this game, which leaves a very bitter taste in my mouth.