The squad had been practising many hours a week for months to get to this point. They were up against a tough team, but they had the belief, conviction and the appetite to win. The determination was written on every single swimmer’s face. As the routine started, it was clear that these women were headed for glory. The tension grew as the music played and eventually reached its climax. When the last figure was executed, there was no holding back. The crowd got up from their seats and started cheering. It was clear that the routine was absolutely perfect. Throughout the routine, all of the swimmers had been perfectly Synchronized by AnnaMaria Jackson-Phelps and Amelie Le-Roche from Zerua Games. 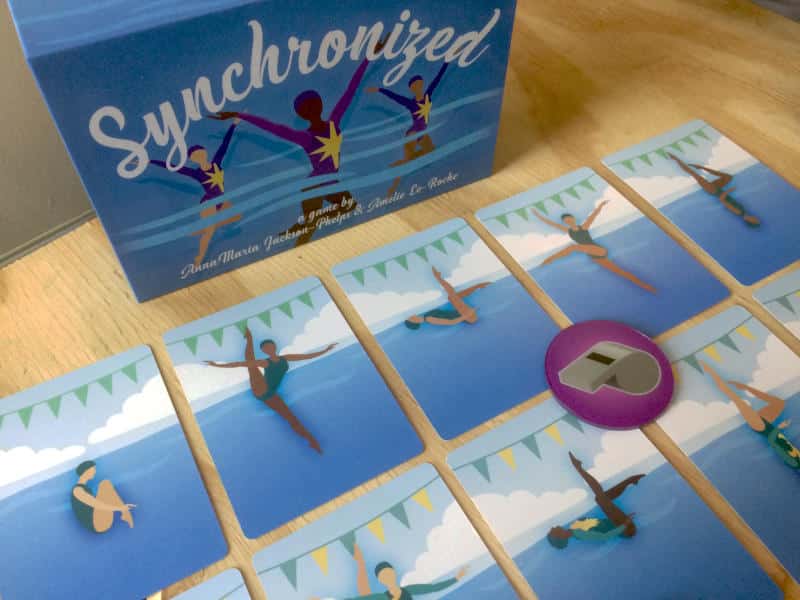 Yes, the excitement that my introductory paragraph alludes to does come through when you play this team game all about synchronized swimming. I think it’s really clever how a relatively simple card game can evoke really strong emotions of excitement. After all, the game really is all about remembering a sequence of cards.

In Synchronized, two teams compete against each other, trying to be the best swimming team at the end of four competitions. Every competition consists of each team shuffling their deck of poses and dealing out a certain number of cards, depending on the difficulty. Both teams will have different routines to remember and they all can take as long as they like to memorize the sequence, but as soon as one team blows the whistle, both teams have to turn all of their pose cards face down.

Then the second deck, which contains the same poses as the first deck, is shuffled and dealt out equally between the teams’ members. So each team will have the right cards that are in the face down sequence of poses, but there will also be additional cards. It’s now up to the team members to play a matching pose below the face down sequence. Players aren’t allowed to help each other and cards are played face down, so it’s not necessarily clear if a team member has played the right card in the right location.

Once both teams are done, they reveal the sequence from left to right, turning over the pose that they had to memorize in the first phase as well as the card that they played in the second phase. If there is a match, they get one point. If all cards are a match, then they get an extra point.

The problem is, that many of the poses are very similar. One pose might be a leg kick to the left, while the other is a leg kick to the right. It’s really easy to believe you’ve got the right card and play it, but find you’ve not got a perfect match. It’s also very easy to forget the exact location of a pose or switch two poses around. Once a team makes one mistake, the rest of the routine starts to fall apart too – just like it would in a real swimming competition.

Also, every round gets harder as the routines the teams are trying to remember get longer. Executing a perfect performance is definitely not easy and gets more difficult with each competition. So when a team does manage to match all poses perfectly in the last round, it’s really amazing.

Now you would think that someone with good memory should be better at Synchronized. That’s true in a two-player game, but when you play with four or more players, it’s no longer that simple. After all, the player with good memory won’t have all the cards for the current routine and they’re not allowed to help their teammates. Suddenly, it’s all about working together as a team and trying to achieve the best routine that’s possible.

As you can imagine, Synchronized gets better, the more players take part. I played this game just with my wife and it was a lot of fun, but when we played it with our neighbours, as a four-player game, it was much more enjoyable. Even though you can’t help your teammates, you’re allowed to suggest that you think you have the card for a certain position in the sequence in your hand or that you don’t think you have that card, as long as you don’t say exactly what pose you mean. It feels much more of a team effort when it’s more than just two players.

There are a few more mechanisms in the game, like the “round” cards, that can give a team more points for specific things or that decide how a round is played, affecting the difficulty level in a certain way. There are also so-called “water” tokens that allow you to “buy” certain actions that might help you execute the perfect routine.

Overall, the game is really well designed and the illustrations by Amelie Le-Roche are spot on. They’re kept relatively simple, so you can focus on the poses and aren’t distracted by unnecessary visual clues. It’s spot on. I also love that the box is transformed into a scoreboard where you record the scores for each round using a dry-erase marker.

The whole game also basically just consists of decks of cards and some tokens. It is pretty easy to explain and also plays relatively quickly. The game comes in a small box that you can easily take with you, so it ticks a lot of boxes for me. Add to that the fact that the game was created by an all-female team. So, go and buy it now, then dip your toes in the water and try and get your team to be fully Synchronized.