After graduating from Oxford, specializing in criminal law, it was time for me to travel and see the world. Little did I know that every journey I took would present me with a mystery I had to solve using my formidable spirit of deduction and unfailing determination. Tiny clues would lead me along a trail of discovering more and more proof which would lead me to the perpetrator. However, until then, all the people I met were Suspects by Sebastien Duverger Nedellec, Paul Halter and Guillaume Montiage from Studio H. 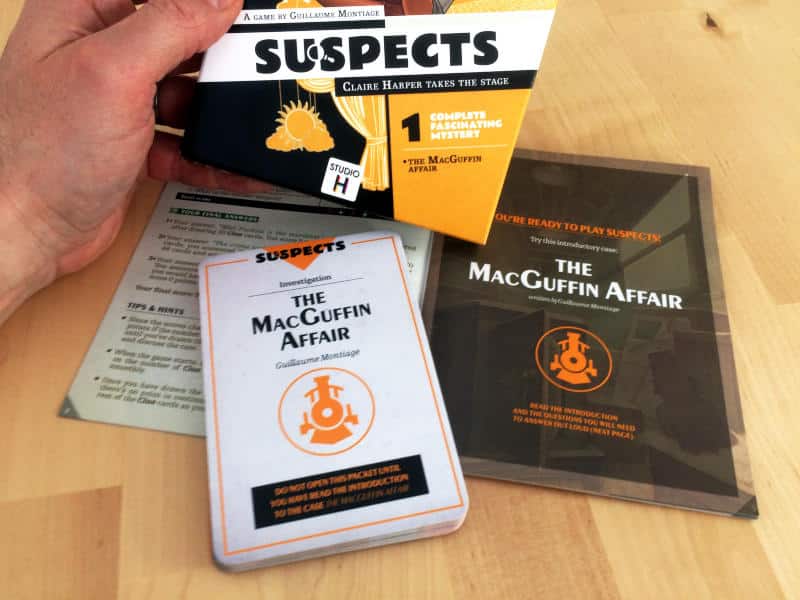 Let me be honest here and come right out with it: I don’t like escape room games.

Most of them rely purely on logic or other abstract puzzles that give you a combination of numbers or similar clues, which eventually lead you to the final answer. There is no link to the setting, no story that the game tells and at no point do you feel like you’re actually in a cabin in the woods or a dungeon or whatever location the game has chosen for you. I much rather solve a Soduko, Ken Ken or crossword than play an escape room game.

There, I’ve said it.

That’s not where the review ends though, because Suspects is very different. It’s a murder mystery and not an escape room game. There are no logic puzzles, you don’t have to cut things out or fold a sheet of paper to line up letters that form another clue that gives you the digits you need for the combination lock that opens the metal box that… well… you get the idea.

As you play Suspects, you very quickly get drawn into the story and feel like a real detective along the lines of Miss Marple or Hercule Poirot, maybe a bit more amateurish though. At first, you’re still trying to work out which clues to ignore and which ones to look at more closely, what suspect to question first and who to talk to later and generally, you’re learning the ropes. It doesn’t take long though, before you get the hang of it and feel like you’re making huge progress, unravelling the events and lining up the clues, while also untangling the contradictory accounts from the various suspects you talk to.

It doesn’t take long to learn the game. There are a couple of A5 pages or so to get through, but it’s really not that hard. There is basically a deck of numbered cards that represent clues, characters, locations or similar. Other than some text that gives you more information, every card will also refer to other cards referencing them by their number. So if you want to follow up on a certain statement or look at a clue, find the card with that number and read it out, then either go back to a previous card or find the next card, based on the numbers you have access to. So you can always go back and forth, re-checking information you’ve previously been presented with or continuing down a new path.

The sooner you make the correct guess, the better will be your final score, and by sooner I mean, the fewer cards you’ve drawn. You’re allowed to make several guesses during the game, before settling on the final choice, so there is no huge pressure to get it right. When you’re ready or when you reach the end of the deck of cards, you compare your results with the final answer and score yourself accordingly.

Ultimately, there is no winning or losing as such. It’s more about enjoying the journey and trying to find the clues and understand what they mean, as well as looking closely at suspects’ statements and seeing if anyone contradicts anyone else or if there are other irregularities. If you’ve ever watched a classic murder mystery, you will be fine – and even if you haven’t, just go with it and enjoy the journey.

I strongly recommend you get the person in your group who loves story-based games to read the rules out to everyone and then also be in charge of reading the clues and other information that you discover as you play. If someone is good at putting on accents and changing their voice to fit the character you’re talking to in the game, then you’re already onto a winner.

In fact, even though you can play Suspects solo, I do think it’s more fun in a group. Mind you, I think anything above four players might get a bit too much, even though it’s easy enough to pass cards around so everyone can take a closer look. In reality though, having four people discuss which card to look at next and decide who did it can be hard enough. I suppose it will depend on the group of people you play with.

I was really impressed with the Suspects demo case and enjoyed it a lot. We played it during a couples’ games night, so there were four of us in total. It was great to look at the clues and work out what’s what. Everyone came up with different ideas, which allowed us to try out different theories to finally arrive at our guess.

The game comes with three cases for you to solve and if the one I played is anything to go by, it will be a lot of fun and not too taxing.

In a word, I can highly recommend Suspects if you don’t like escape room games but love a good murder mystery and fancy yourself a Miss Marple or Hercule Poirot.