Staunch competitive players may feel that co-operative games are a bit pointless. After all, it makes more sense if there is only one winner, rather than several, or so their reasoning might go. However, even if you love co-operative games and even if you prefer them to competitive games, there are some games where you don’t feel like you’re achieving anything – and that might feel pointless to you. In this article, I want to look at this in a little more detail. 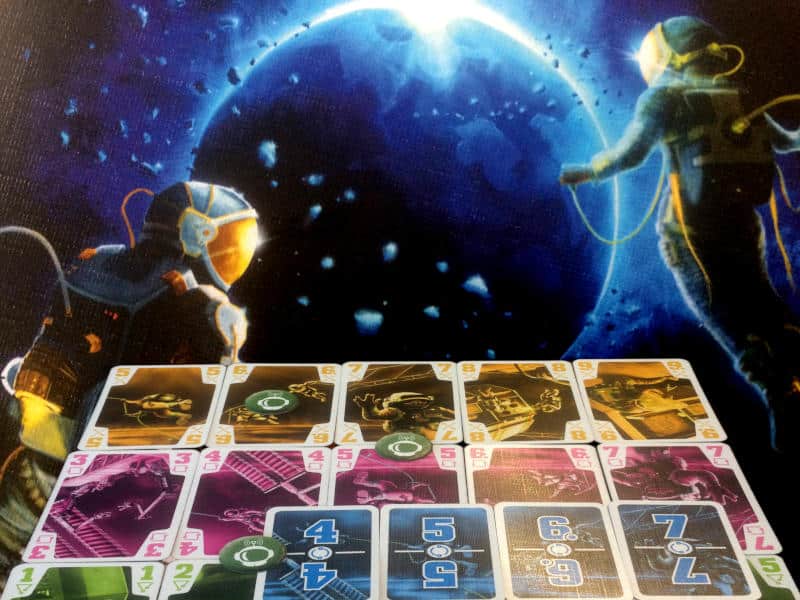 The article was inspired by my mum, who asked me what the point of The Crew was. It’s not like every player tries to win for themselves, but everyone plays together to complete the current mission. I’ve grown up with trick-taking games and all of them were competitive ones. Well, not quite. Actually, all of the ones I’ve played in my teenage years and as a young adult were actually semi-co-operative. In Skat, a three-player trick-taking game, two people play against one. In Doppelkopf, there are two teams of two players each. So, you’re often playing co-operatively with another player and you have to play accordingly, sometimes giving your partner cards, so that you score higher as a team than the other player or players.

However, ultimately, there is ever only one winner. You play Skat and Doppelkopf over a number of rounds and after each round, players will score a number of points, maybe even losing points, depending on the game. Sometimes you decide the number of rounds in advance, but more often than not, you just keep playing until the evening draws to an end or your lunch break is over or there is some other reason you stop. At that point, the player with the most points wins. Consequently, both games are actually competitive games.

So, if you’ve grown up with trick-taking games, then The Crew will feel a bit weird and maybe a bit pointless. You just keep playing and either proceed to the next mission, if you win, or replay the same mission, if you, as a team, fail. Sure, technically there are points. You can record how many attempts you needed to complete each mission and you can compare your scores with other groups of players, but in reality, you just play because you enjoy the challenge and the increasing difficulty of the missions. You enjoy The Crew because you have to think a bit differently from other trick-taking games, even though all your experience with trick-taking games comes into play and you’ll be better at this game if you know trick-taking games well.

I love The Crew, as you are able to see in my review of the game, but even I can see why my mum asked what the point of the game was. It’s not like you’re really working towards a goal, other than to complete the fifty missions the game has to offer. Theoretically, you could keep playing and many people do, picking missions they enjoyed and playing them several times.

Other co-operative games are different in that respect.

In Pandemic, for example, there is a defined end to the game. You either find cures for every disease and win or the deck or cubes run out and you lose. There is a clear target and you feel like you achieved something when the game ends – or maybe you feel you could have achieved more, if you had just had another round to win the game.

In Sleeping Gods, you explore a rich and detailed world, almost aimlessly, but even though there is no clear target, you have plenty of things to do and tasks to fulfil that you feel you’re achieving something as you play. You feel terrible when you have to return to a harbour to heal your crew, because the last battle didn’t go in your favour. There is a sense of a story arch that ends when your event deck runs out.

So, I think the fact that The Crew can basically be played forever and ever, even though there is a limit of 50 missions, makes it feel pointless.

There is something else to consider though. One reason why I love The Crew is that it teaches people trick-taking games. If you’ve never played one, you won’t be familiar with terms like “trump cards” or mechanisms like “following suit” or concepts like “being ‘long’ in one suit” or “emptying your hand of a suit”. As you play the game together, co-operatively, you learn about these things. For beginners, that’s the point, or at least one of the points, of The Crew – and when you become more experienced, the game does become more pointless in that sense.

That is not to say that The Crew isn’t fun for experienced trick-taking players or that it doesn’t offer a challenge to them. So it’s not actually pointless, of course. It’s fun to play a game together as a family or with friends, even if you’re not achieving anything within the game. I loved playing The Crew with my parents and they enjoyed learning to use their experience and change their approach so that we, as a team, would complete a mission successfully.

In fact, sometimes it’s more fun to play a “pointless” game, because you don’t have to think so much about the game, so you can focus on the social element a lot more. You have the brain space to talk with the people around the table in a meaningful way and you can really listen. The game almost fades into the background and is just an excuse to sit together and be together.

Now I wonder what you think about co-operative games. Do you enjoy them? Do you prefer them to competitive games? Have you ever played a co-operative game that felt a bit pointless, in the way I discuss in this article? Which game was it? Please share your thoughts and experiences in the comments below. I’d love to hear what you have to say.