Shuffle your deck of creature and vegetable cards, put the pile facedown on the table and spread the cards out, so everyone can reach them and after explaining a handful of rules, you’re ready to play A game about quickly grabbing creatures that are totally different & counting your beetroots by Andrew Beardsley and Behrooz Shahriari from Stuff By Bez. 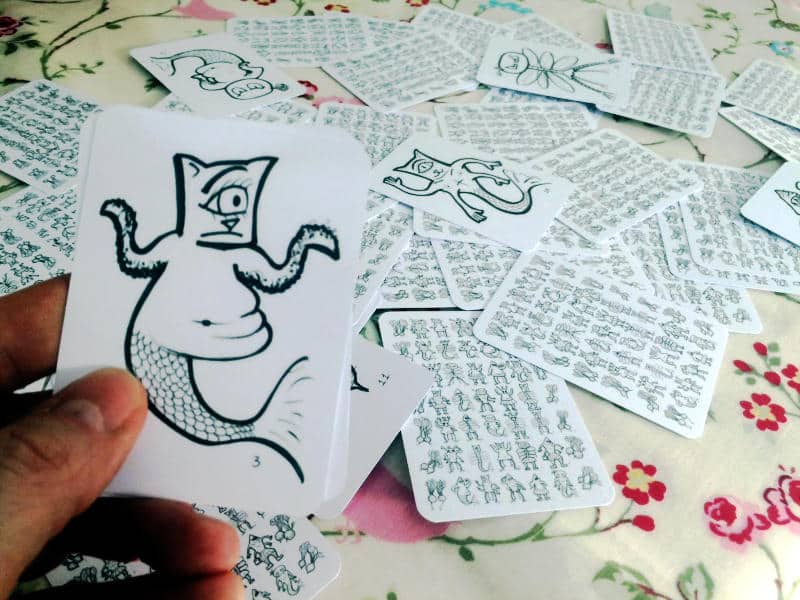 Yes, it really is that simple. The rules are also very simple, taking less than a minute to explain. Everyone basically picks up a card with one hand and either adds it to their deck of cards that they hold in the other hand or they put the card back onto the table, leaving it faceup.

When you add a card to your deck, make sure it doesn’t match the previous card in any way. The majority of cards are creatures with a combination of different numbers of eyes, arms and legs. So putting a creature with four arms on top of a creature that also has four arms isn’t allowed, even if the two creatures have a different number of eyes and legs. As long as all three, the number of eyes, arms and legs, are different, you’re allowed to add the card though.

Vegetables, in this case beetroot, are like wildcards and can always be added to your deck, unless the top card on your deck is a beetroot. You are also limited to no more than five beetroot in your deck.

The game ends when everyone has stopped taking cards – and everyone can decide for themselves when they want to stop. Of course, you want to keep taking cards while you can, because the person with the most cards in their deck wins – provided their deck doesn’t have two creatures next to each other with the same number of eyes, arms or legs and also don’t have two beetroots next to each other.

Actually, that’s not quite true. Everyone who didn’t mess up their deck wins, but the person with the most cards wins more than those who have fewer correct cards in their deck. So, everyone wins, but only one person wins the most. We’re all winners!

Yes, it’s all really simple – yet, it’s also really difficult. The number of times I was sure my deck was flawless, but it turned out that I had not one wrong pairing of creatures, but two, in my deck, is crazy. After all, you’re going as quickly as you possibly can and after a while, you can’t see the wood for the trees – or more to the point, the legs for the arms or the eyes for legs or… well, you get the idea.

As you can imagine, the whole game is a lot of franticness, grabbing cards, checking them, putting them back, taking another card and so on. You need to also keep an eye out for cards that other players have put back faceup, because one of them might be exactly the card you need to continue your deck, without having to rely on beetroot.

If you’ve ever played a game from Stuff By Bez, then you know how wonderfully imaginative the games are and how much love and positivity has gone into them. A game about quickly grabbing creatures that are totally different & counting your beetroots is no different of course. The illustrations are wonderful and the fact that this game is basically a deck of cards, its price is set accordingly. It’s really affordable. It also means it’s easy to take with you and play while you’re out and about, as long as you have an average size table, it’s dry and it’s not too windy. As you probably know, I love games that are easy to carry, easy to explain, quick to play and a lot of fun and this game ticks all of those boxes.

The best thing about A game about quickly grabbing creatures that are totally different & counting your beetroots is that you can mix multiple decks together if you want to play the game with more than 3 players. Alternatively, if you want a longer 2-3 player experience, then mixing two decks together is also an option. It’s really up to you how many cards you think you can shuffle, how big your table is and how many cards you can comfortably hold in your hand.

So, I can only say good things about this wonderful game from Stuff By Bez. Get yourself a copy and let the craziness ensue.