Takahama was dying. We were tending to him and tried to make him as comfortable as possible. The windows were wide open and a warm breeze filled the room. Takahama was muttering about how he was too ill to visit his love Akiko‘s grave and how she would miss the white rose he brought her every day. We told him that he would visit again as soon as he was better, when suddenly, a pure white butterfly flew in through one of the windows and landed on his pillow. We tried to shoo it away, but to no avail. The butterfly would keep coming back, so we relented and allowed it to stay. Takahama looked at the butterfly, smiled and then his final breath left his lungs, as he died in peace. The butterfly saw this, lifted off the pillow and flew out of one of the windows. We didn’t know this at the time, but it flew all the way to Akiko‘s grave and when it landed, it disappeared. The butterfly was one of the Fluttering Souls by Joel Lewis from Good Games Publishing. 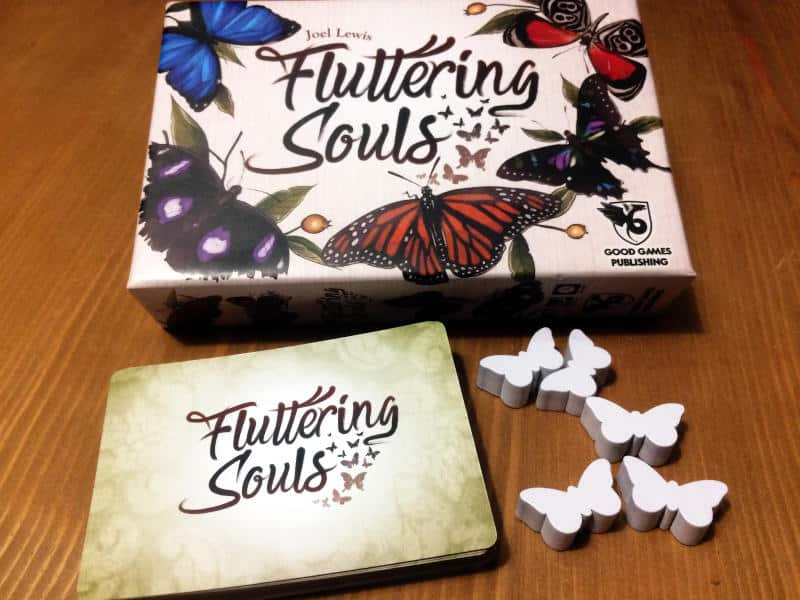 The story that inspired this game is absolutely beautiful, with a man showing his undying love for the woman who died too soon and the woman’s soul coming to find the man when he didn’t come to visit her grave. The tale describes how love can transcend death and be eternal. The game, Fluttering Souls, isn’t eternal though. In fact, it plays very quickly, in around 5-15 minutes, but the deck of butterfly cards are beautifully illustrated and a pleasure to look at.

Not only is Fluttering Souls very quick to play, but it’s also almost as quick to teach and learn and even quicker to set up. At its heart, it’s a two-player set collection game, where different butterflies give different numbers of victory points, depending on how many of them you have. Cards are laid out based on a layout card, which changes each round, but there will always be cards that overlap other cards. On your turn, you take a butterfly card, trying to grow one of your existing sets if possible, but you can only take cards that aren’t overlapped by another and as you take cards, you’re freeing up more choices for the other player.

So your choice of what card to take is not only based on the type of butterfly you need, but also what cards you open up for your opponent. Sometimes it’s better to take a card that might not score much for yourself, if you prevent the other player from getting a card that would score them a lot.

There is also a card that you can put in the place of the card you drew, thereby allowing you to take a valuable card for yourself while at the same time blocking the other cards for your opponent. Yet, once you’ve put that card down, the other player can take it, of course, so you have to think about when you play it.

There are also a couple of wildcard butterflies, worth 2 points on their own, or you can add them to one of your existing sets to make it more valuable.

Each round you shuffle the whole deck of butterflies and lay them out according to the layout card. There will always be two cards left out of the game at random, so even though you know how many times a certain type of butterfly card is in the deck, you can’t be sure if they’re all in the current round. That creates a little bit of uncertainty when it comes to deciding which butterfly you want to collect.

Ultimately though, turns are very quick, because you don’t have too many options and even though you could try and plan several turns ahead to see which card you should take for yourself, most of the time you just take the card that will allow you to complete on of your own sets. So there isn’t really any strategy necessary and it’s the sort of game where there should be no analysis paralysis.

For what it is, it’s a really lovely game. It comes in a small box which is easy to take with you, it plays very quickly and it doesn’t take a huge amount of room on the table, so could easily be played in a pub or restaurant while you’re waiting for food. At the same time, it’s the sort of game you probably want to play a few times in a row, but then you’ll put it away for a while until eventually, it’ll come out again. In that sense, it’s an evergreen game that you are likely to keep in your collection for those times when you just want to have a very light, quick, two-player game.