Humans were close to becoming extinct. No, this wasn’t some sort of natural disaster. It was what many films had predicted. An artificial intelligence had seized power and started to manufacture parts that it added to itself. The longer we waited, the bigger this monstrosity grew and the more powerful it became. If we did nothing, it would eventually become our Doom Machine by Nathan Meunier. 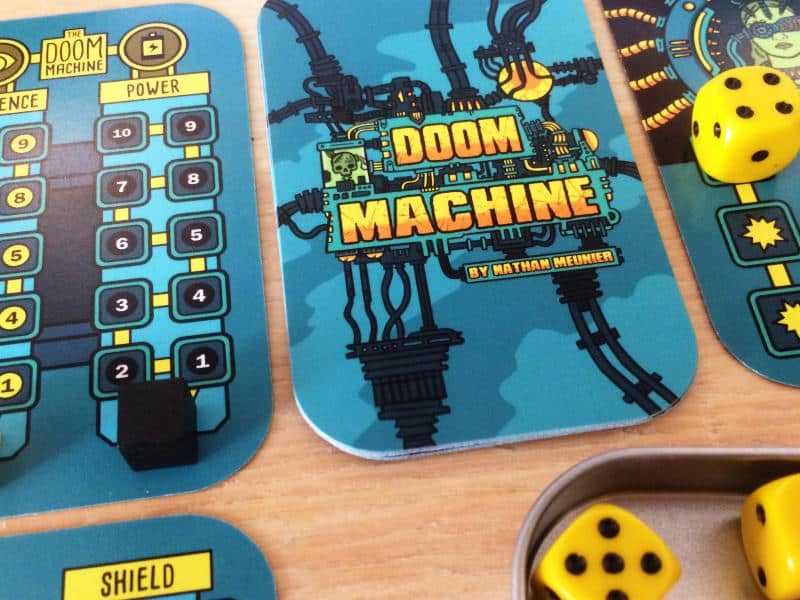 I have previously reviewed Doom Machine in digital form, and this time I am looking at the physical version of the game after having received my copy from the Kickstarter campaign. Of course, there is no difference in the rules or gameplay between the version I played and did a playthrough for and the mint tin copy I have received. However, playing a game online versus in real life is a different experience.

As before, your task in this solo mint tin game is to defeat a constantly growing machine, which is powered by the Doom Core, an AI that is slowly increasing in sentience and power. Starting with only three machine parts, every round it grows and grows and as it does so, it becomes stronger all the time, making your mission more and more difficult.

In order to deal damage to a machine part, you need to assign one or two dice in a specific configuration from your very limited pool of dice to it. At the same time, you also need to assign dice to your shields, because you only have so much energy before you die. Some machine parts require high-value dice, which would be great as shields and if your dice rolling luck is favourable, then you will definitely use them to deal more damage to your enemy – but of course, when your dice decide to plot against you, all you can do is assign everything to your shields and hope that you will survive another round.

Already, every decision feels painful and you have to weigh up when the time is right to strike and when you’re better served by saving your energy and focus on survival. The advantage of defeating a machine part card is that you will get another dice that you can use to attack or for protection. The disadvantage of cowering away and holding your dice above your head to take the deadly blows that the machine deals out on its turn, is that every round another machine part is added, which will make the machine grow stronger.

Time is definitely of the essence, but you’re no good to anyone if you die. It’s a tough choice and really helps you engross yourself in the setting of the game. You’re further immersed into the idea of a growing, living, thinking machine, because every machine part actually carries out its own programme. Every round every machine part executes the next step in the code, sometimes dealing damage, sometimes making the Doom Core more sentient or more powerful and sometimes activating adjacent machine parts another time.

As you execute the steps on the machine’s behalf, you really feel like the mechanical monster that you’re fighting against is becoming cleverer and stronger. You can almost hear the machine think. Some card combinations are just amazing and even though the deck of cards that represent the machine’s parts is shuffled and therefore which cards come out and in what order is random, it does feel like there is some sort of artificial intelligence at work, that deliberately chooses which part to build and attach next.

It’s really magnificent to watch the machine grow in front of you and you’re almost in awe of it, ready to throw in the towel and give up. Yet, even when the situation seems desperate, you just want to survive one more round – and even when you do finally die, which you will a lot, let me tell you now, you just want to set it all up again and play one more game.

After all, once you know how the game plays, setting up takes a minute or two and the game itself is usually over in 15-20 minutes, unless you make it all the way through and defeat the machine – and if eventually you do defeat it, you can increase the difficulty further to give you even more of a challenge. Also, the game comes in a standard size mint tin, so is really easy to take with you anywhere and its footprint on the table isn’t also particularly huge, so you should be able to play it in a pub and maybe even on a train or plane.

That brings me nicely to the components and how it feels playing the physical copy of the game versus the digital one. The deck of cards comprises your health tracker, the machine’s sentience and power tracker, the machine parts and the Doom Core as well as the rules. It’s really nice to have it all there in front of you, even though you probably won’t need to refer back to the rules once you played the game once or twice. The small dice that come in the tin are also really lovely and you can quite happily roll them inside the tin, if you’re out and about playing Doom Machine, so that you don’t lose them.

The only small annoyance I had were with the little wooden cubes that you use to track your remaining life and the sentience and power of the Doom Machine. There is nothing wrong with the cubes themselves, but as you can imagine, it’s easy to accidentally nudge them out of place. So losing track of how much life you had or where the machine was at in terms of sentience and power is quite possible if you’re not careful, especially if you’re out and about.

However, I don’t know what else could have been done. I don’t think dual-layer boards would really be a sensible solution here and using paper clips to track your health, etc. might have been an option, but they do tend to wear down the card. So it’s really just something you need to keep an eye on and be careful with. It’s definitely not a deal-breaker and there are other, much bigger and more expensive games that have the same issue of accidentally knocking cubes out of place by nudging the table, so I can easily forgive Doom Machine this tiny niggle.

Ultimately, this clever little solo game is amazing and the setting really comes across, engrossing players in this apocalyptic world where a machine with artificial intelligence tries to destroy humanity. There is definitely a huge amount of replayability and Doom Machine will keep you wanting more – I keep bringing it out in my lunch break and try my hand at finally defeating the mechanical monster.