I was ready. It seemed like an impossible task, but I was mankind’s only hope. I had to do what I could and fight my way through the ever-increasing number of machine parts, which were making the machine stronger and bring it closer to sentience. It was a matter of taking it one machine part at a time until I reached the core and was finally able to put an end to the Doom Machine by Nathan Meunier. 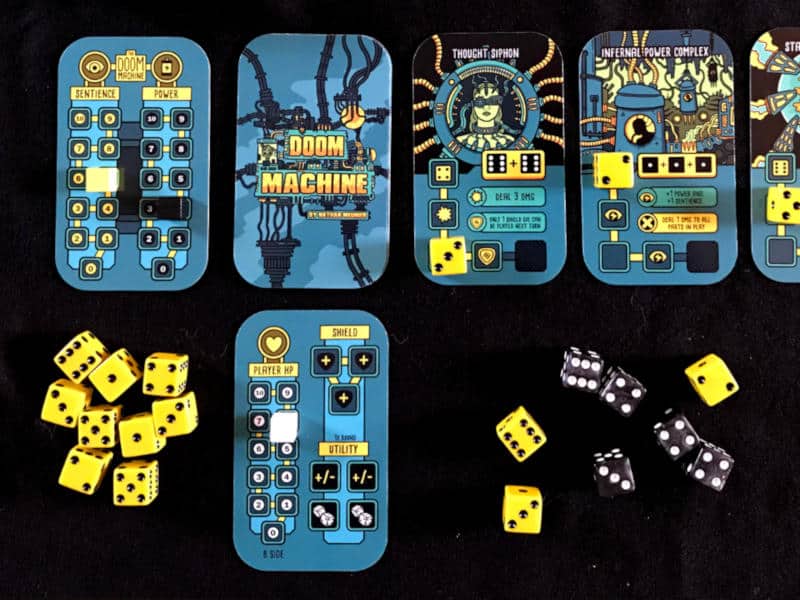 The theme is pretty incredible and reminds me a little of The Matrix or similar apocalyptic science-fiction settings. The illustrations by Nathan Meunier are also incredible and really bring you into the world this little game conjures up – and when I say little, I am talking about a mint tin game that consists of a deck of cards, two handfuls of dice and some tokens.

I’ve not actually seen a physical copy of Doom Machine, having only played it on Tabletop Simulator, but from what I can tell by having seen a photo of the prototype and knowing how big mint tins are, I do think it will fit neatly into your coat pocket, handbag or rucksack and as long as you have a little table, you can play it pretty much anywhere while out and about.

Now, I’m not a solo-gamer myself, preferring to play games with other people, but I have recently started to play co-operative games more often, and you could argue that all solo games are basically co-operative games, but you’re playing by yourself. So I approached Doom Machine from that angle.

The game is all about the dice. You roll them, manipulate them and then place them. That sounds like there is a lot of randomness in the game, which is compounded by the fact that the deck of cards, which represent the machine’s parts, are also shuffled every game and create more randomness. However, you have a lot of control over the dice and their values, and it is your choice which machine parts you attack, giving you a lot of control over the cards as well.

Each machine part requires a specific combination of dice to break through the defences and allow you to attack it. To help you with this, you can increase or decrease the pip value of up to three dice by one, and you can re-roll up to three dice once. That’s usually enough to get the numbers you need and weaken the machine parts.

Each machine part starts with a different strength, represented by one of the dice, and when you reduce that to zero, the card gets removed from the game and you get another dice added to your dice pool. That means, the more cards you destroy, the more dice you have to attack. So even though you’re not building an engine as such, it does feel like you get more and more powerful, while the Doom Machine gets weaker and weaker.

That simple mechanism creates a real sense of achievement and satisfaction. You feel like shouting “take that, you stupid machine” as you reduce another machine part to nothing. It’s a great feeling.

Of course, the machine isn’t idle and every round a new machine part is added. The machine grows and becomes stronger. As each machine part goes through its program, it can increase the Doom Machine‘s sentience and power, which in turn can make the machine’s attacks more powerful. It’s as if you’re dealing with a thinking machine that’s getting better as time goes on, adding to the sense of urgency you feel right from the beginning.

It’s actually quite amazing to see how the deck has been designed to create lots of subtle interactions between cards, which make the machine more effective overall and which help you decide which part to focus on. If you can destroy a key section of the machine, you can really slow it down.

You can protect yourself from the machine’s attacks by assigning some of your dice as shields, but of course, the more dice you use as shields, the less you have to attack the machine. It’s a real balancing act and very often a tough decision. I was always tempted to assign all dice to attacks, which left me wide open, and the machine took full advantage of that, killing me after only a handful of rounds. It’s clearly a strategy that I need to improve.

The randomness of the dice does add to the excitement. Even though you have a lot of control over the dice results, there are rounds when you desperately need certain pip values to attack a particularly powerful machine part, and when none of the dice are anywhere near what you want. That’s when you start to despair and get really worried. You will end up idling one round and simply assigning all dice as shields, just so you survive a little longer.

Doom Machine is a really tense and exciting game. The puzzle the deck of cards and the dice present is always changing and will keep you on your toes. Yet, it’s not too thinky and is something you can play of an evening, after work, when you’re tired, just to wind down. Just don’t expect to defeat the game on your first try – or your second – or even your third. It will take some time before you finally manage to destroy the doom core – and when you feel like you’ve mastered it, there are variants to raise the difficulty another level or two.