Being a city planner isn’t easy. You need to balance out the needs of your citizens for green spaces, living accommodation as well as offices and industry. You also have to ensure the infrastructure allows everyone to get around easily, without taking over. With that in mind, we went ahead to collaborate on the design of Sprawlopolis by Button Shy. 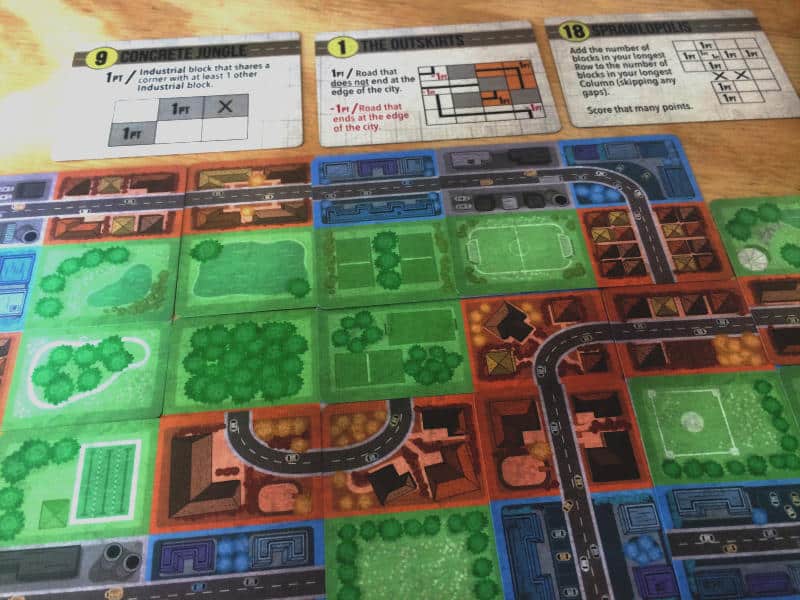 Here is another wonderful wallet game, consisting of only 18, double-sided cards. As you will probably know by now, I love games you can easily carry around with you. Sprawlopolis is also quick to learn, very quick to play and doesn’t take up a huge amount of space on the table. These are all great pros for me in favour of this city planning game.

The illustrations of the cards are also really fitting with the theme of the game and the city map you create as you play your cards either adjacent to each other or overlapping, very much like you do in Hanging Gardens, if you know that game, looks really appealing and it is very clear which of the four sections on each card represents which type of area: commercial, industrial, parks and residential. You can also quickly see the roads in your city, which play an important part during gameplay.

Turns tend to be quite quick, because you only have three cards in your hand and the only decision you have to make, is which card to play to the city. You then pass the other two to the next player, after which you draw another card from the deck. So there isn’t much to do on your turn and really only one decision to make: which card to keep.

That is easy enough at the beginning of the game, but as the city grows, it becomes harder and harder. You keep trying different locations, either by abutting it to the city limits or overlapping it with one or more existing cards. You also keep rotating your card 180 degrees, doubling the possible places for your card to go. Every time you offer up your card, you try and do a quick calculation of the end game score, so that you can compare that location to the next possibility.

If none of the places for the card seems particularly beneficial, you try the second card in your hand and also the third, constantly trying to work out what will bring you the most points for the end of the game. It’s not too bad when there are only three or four cards in your city, but eventually, everyone’s turns slow right down. It’s not analysis paralysis as such, but a simple matter of mathing out the best score for every possible card location and all three of the cards in your hand.

Additionally, you all play this game together, cooperatively. So you may intentionally play a certain card in a specific location and pass the other two to the next player, thinking that they will play one particular of the two cards in a specific position and orientation in the city to create a large park or cover up an industry or otherwise give you a big point boost for the game end. So you do that and tell the next player what you want them to do, making you the unintentional alpha player of the group.

Of course, you don’t want to be the quarterback, but without knowing what card other players have in their hand, you can’t really plan things together as a team. All you can do is look at the three cards you have in your hand and go from that. So, if you don’t like anyone taking over the game, then it’s probably best not to talk at all.

It all sounds a bit disappointing so far, but I think Sprawlopolis is meant to be played in a certain spirit: don’t take it too seriously. If you don’t try and make every card count and be placed in the perfect location, but instead you all just enjoy the city growing up in front of you, with only a cursory glance at the scoring potential, then this game is actually really enjoyable. It’s also very quick to play, so you can just set it all up again and try once more to beat the game. Don’t overthink your turn and just place cards where they seem sensible and see where you end up.

Where Sprawlopolis really shines though is in solo mode. It does feel like this game was designed as a solo experience and the higher player count was added at a later date to make it commercially more appealing. It seems that people on Board Game Geek agree with this, rating the solo mode as the best player count. It’s a lot of fun trying to beat the game with the cards you’re dealt and spending a good amount of time finding the best place for each and every one of them. It’s something I really enjoyed and even though I’m not a solo player, Sprawlopolis is the sort of game I might take with me on a train or plane journey to play by myself.