The forest ratmen were on the loose, overrunning the land and pushing out stout elves, heroic dwarves and berserk trolls wherever they found them. As the ratmen invaded region after region, other factions left this world, but not for long. They only retreated for a little while as they regrouped and then returned with fresh vigour but reduced strength. The battle was on and there wasn’t much room for everyone on the map. After all, it was a Small World by Days of Wonder. 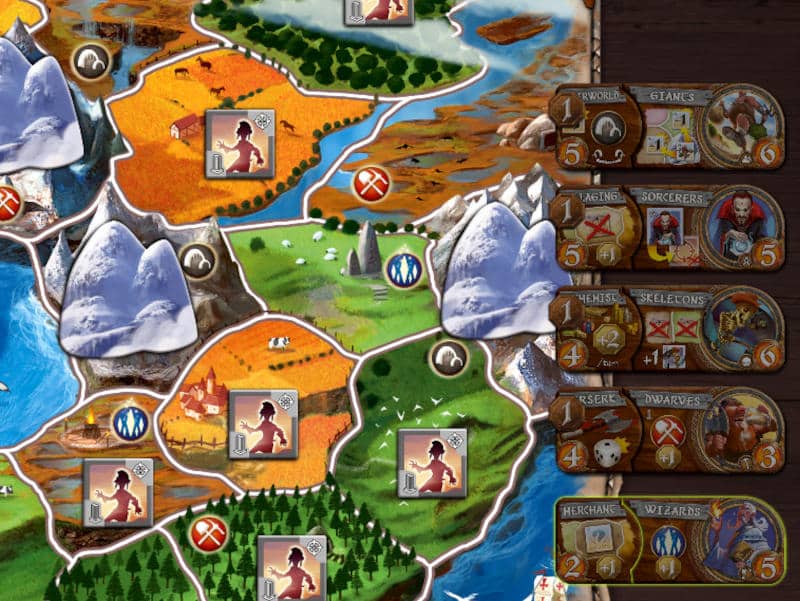 Yes, this game is from 2009, so over 10 years old now, and I would venture to call it a classic. It was one of the first modern board games I learned and the second game I taught to our daughter, who really enjoyed playing it with me. Smallworld is very easy to teach and quite quick to learn. You choose one of the factions available, take the relevant tokens and start placing them on the map, spreading from one region to an adjacent region, placing additional tokens when pushing out already placed factions or conquering more difficult terrain, such as mountains, until you run out of your faction’s tokens. Then you count the regions you control and get points, before it’s the next player’s turn. It’s all about area control and really straightforward.

Factions are randomly revealed in an offer row and each faction gets a randomly chosen special ability. That’s where the forest ratmen come in. Ratmen have a specific ability just by themselves, but the forest part gives them bonus points when they conquer forest regions. The mix of faction and special ability creates a huge amount of variety and therefore replayability, sometimes leading to funny combinations, which is what makes Smallworld so much fun to play. You never know, what combination might come out next.

There is a lot of player interaction in the game, because the map all of you are trying to conquer is very small indeed. Hence the name of the game. It means that you can’t avoid knocking out other players’ tokens. However, as everyone has to do this, it doesn’t feel quite as brutal as it might seem. In fact, it does allow two or more players to work together and try and stop the player who is in the lead.

I say, “is in the lead”, but in fact nobody knows for sure who is winning, because points are kept secret and are only revealed at the end of the game. So it’s very possible to beat up the wrong player, either intentionally or by mistake, so bear that in mind. If you don’t like player interaction, maybe give Smallworld a miss.

At the same time though, it feels amazing when you conquer region after region on your turn. It gives you a huge sense of satisfaction as you see your faction spread around the map and wipe out other players’ tokens. Also, you never wipe all tokens off the board. If you conquer a region controlled by another player, they get all of their tokens back, except for one. So they can attack you on their turn, even if it’s with a slightly weakened force.

That’s another reason why I don’t think the player interaction in Smallworld feels quite so bad. You might be wiped off the map, but when it’s your turn again, you can take your revenge.

However, eventually, you won’t have a lot of tokens left when it comes round to your turn again. That’s when you want your faction to go into decline, meaning they remain on the map, but can’t do anything else (except for one faction that still continues when it’s dead). You score points one more time, but then immediately pass to the next player. Then, when the turn comes back round to you, you can choose another faction and spread on the map once more. Just make sure you avoid your own, in decline, tokens, which isn’t always possible.

There is a fair bit of strategy and tactics in Smallworld, which will appeal to players who like this sort of thing, but it’s also very possible to just play as you feel on your turn, without planning ahead at all. You’re still likely to do well and have a lot of fun in the process.

In fact, Smallworld is this sort of game that has a great balance between lots of fun with enough thinkiness if you want it. It’s also relatively quick to play and therefore a great game to play as a warm-up or cool-down during a game night. There are also plenty of expansions, adding more factions and other mechanisms, but the base game alone should keep you busy for quite some time to come.