The sky suddenly darkened above me. As I looked up, I saw the giant spaceship that was filling up more and more of my view. It towered above the skyscrapers like a huge saucer, dotted in lights and what seemed like openings. It was hard to make out, but it seemed to be bigger than downtown. Suddenly, small aircraft emerged from the spaceship’s openings and started to descend. It felt like we were suddenly living Under Falling Skies by Czech Games Edition. 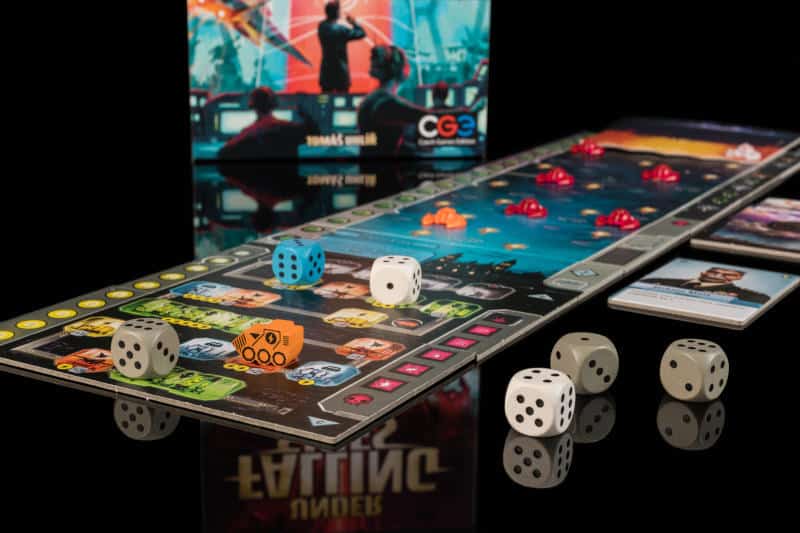 As soon as you set up the game, you think: “This is Space Invaders!” Well, at least if you’re from a certain era, like myself. The popular 80s (well, technically late 70s) computer game, in which several rows of space ships slowly make their way down from the top of the screen, while you try to destroy them using your movable gun before they make it all the way to the bottom or destroy all of the buildings, has now been made into a board game.

The computer version was a lot of fun and I clearly remember playing it on my ATARI games console for hours and hours. So I had high hopes when I set up and started playing Under Falling Skies. Like the classic computer game, the board game version is also a solo affair, and I’m not much of a solo player myself, enjoying the social aspects of board games more. So my expectations, and therefore the bar for the game, were raised even further.

The game is actually a campaign game, where you play from scenario to scenario – but don’t worry, I’m not going to spoil anything in this review. Basically, as you progress through the campaign, you change the starting setup and consequently increase the difficulty a bit more. However, it’ll take time, because the first time you play, you’re unlikely to win. It’s not so hard, that you think you’ll never beat the game, but just hard enough to keep you wanting more.

The core of the gameplay is dice placement. You roll a number of dice and then use them, one at a time, for different actions, such as shooting down the space ships that drop down from the mothership, expanding your defense base, which basically gives you access to more powerful actions, doing research, among many others.

It’s the research that wins you the game. I suppose, thematically you aim to find out more about the aliens, so that you can discover a weakness and defeat them. Once you’ve reached a certain level of research, that game ends and you’re victorious.

The problem is that deciding between which actions to take and in what order isn’t easy. You always want to do everything, but never have enough dice. Speaking of the dice, yes, they create a certain amount of luck, but because you can decide which dice you want to place, and because when you place certain dice you get to reroll any unused dice, you do have a good amount of control over your luck. It’s rare that you really can’t do anything you want. There is usually something productive for you to achieve, even on the worst dice roll.

The aliens create another interesting aspect in Under Falling Skies. Some of the small ships, which come down to attack your base, are replaced by a new ship, as soon as they’re destroyed, which creates an endless wave of attacks. If a small ship gets through to your base, your shields are reduced and if they ever go down to zero, you lose.

Additionally, the mothership also comes down one row after every round, and of course, if it ever reaches the level of your base, you lose immediately. The situation seems absolutely hopeless, but if you’re clever and time it right, and have a bit of luck with your dice, you can defeat the aliens and win the game.

The timing is particularly important when it comes to destroying the small attack ships. Depending on which position in the sky they explode, additional effects trigger, some of which make your situation worse, but others can work really in your favour. So you do have to be really selective about what ship you want to destroy and when, while at the same time not be too casual about it, so you don’t take too much damage.

So, as I said at the beginning, the bar was set really high for me, but Under Falling Skies has smashed it. As it’s a solo game, I don’t often get to play it, but when I do, I really enjoy it and the Space Invaders soundtrack goes through my head and I feel like a child again. I usually play it a couple of times, one after the other, because it’s so much fun. Even if I win the first game, I play another, just to keep the campaign going.

In theory, you can play this game with multiple people, but you basically have to agree what you want to do with the dice, so it really works better as a solo game, but I can see how maybe couples or friends might want to play it together.

So, here is to more “pew, pew, pew!” with Under Falling Skies. Ready the guns, power up the generators and let’s find out how to destroy those pesky aliens.