“Asbestos and its use have a long history. A naturally occurring mineral, asbestos was once celebrated for its seemingly wondrous resistant and strengthening properties until it was declared a human carcinogen by the World Health Organization’s International Agency for Research on Cancer in 1987. […] This odd dichotomy between the recognition of the harmful effects of the mineral and lure of the potential to make a profit on it is by no means new to industry or unique to asbestos. As game designers and game players, however, this is thought provoking.” From the rulebook of The Cost by Spielworxx. 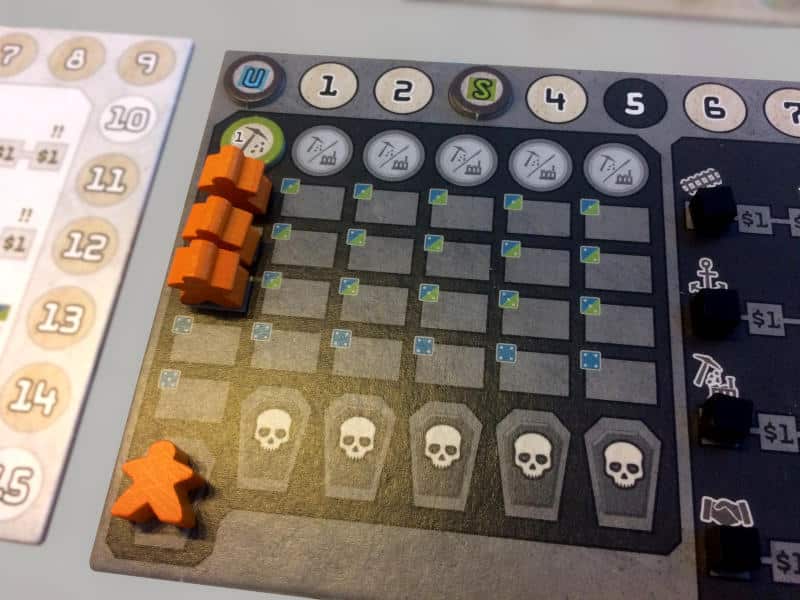 It took me a long time to pluck up the courage to write a review about a game that deals with such a controversial topic. I wanted to have played it often enough and with enough different people to make sure I would understand how the game deals with the topic and how it works from a gameplay persepctive, as well as hear how playing The Cost makes people feel.

After all, as the player, you’re trying to make as much money from mining, milling and selling asbestos in order to win, without paying any attention to the very real human cost this activity had. The Cost is not your usual action selection, area control, resource management game, where you’re just pushing cubes around the board. It’s not going to be for everyone. So I always made sure to let people know what this game was about and the real-life events that it is built around, allowing everyone to decide for themselves if they wanted to try it.

The Cost is, as I said, an action selection game with area control and resource management. All the mechanisms in this game are a little different to other games, adding more interest to The Cost and giving it a strategic element.

For the action selection mechanism imagine a grid of hexes, like in Catan. Players select one corner where three hexes converge to take the three actions displayed on them. Once a corner has been chosen, it’s blocked and other players have to use a different corner. Already you can see that you need to think about what actions you want to carry out and what actions you might want to block for other players.

Resource management is about investing in countries to give you local currency that allows you to mine, mill and sell your asbestos there.

Even the flow of the game is a bit different. There are basically four phases, two of which are more to do with housekeeping than anything else. First, you select your actions, via the hexes, as explained above, but these actions are all about getting money or building mines, mills, railroad tracks or ports. They have an effect on the game boards and even though the choices you make during this phase are vitally important, it doesn’t feel like anything much is happening.

That all changes in the third phase, where players take turns to mine, mill or move/sell asbestos, or pass. Players have to continue taking one of those actions until nobody can do anything else. It is in this phase that you run your engine, so to speak. Mine some asbestos, move it to a mill, mill it, move it to a market to sell for a profit. You can see the asbestos move around on the board until nothing is left and the third phase ends.

So already it’s clear that The Cost is different from other games. The graphic design actually adds to this feeling. It all feels rather industrial, a little bit dusty even and the pattern of asbestos fibre panels can be seen throughout, constantly reminding you what this game is about – that is, if you do actually need reminding.

The thing is, when you mine or mill asbestos, you always have to make a choice – do it safely and protect your workers, but pay a fair bit of money, which erodes your profits significantly, or do it unsafely, putting your workers’ health at risk, but costing you nothing and therefore giving you the most profit. The decision seems very clear here, but The Cost makes it harder by making the real-life implications obvious. If you want profit, one of your workers dies and is moved to a coffin area on your player board, where that worker will stay until the end of the game, as a constant reminder of the choice you made.

That’s where the game starts to make you feel uncomfortable, if you weren’t uncomfortable enough from the beginning when you heard what The Cost is about. It gets worse though. Once you go down the route of letting your workers die, you need to get new workers, of course. The thing is, hiring workers doesn’t cost you anything. You don’t even have to pay them anything when you put them to work, if you accept that one of them will die. You really feel how cold this industry was – or in some places still is.

People, the little worker meeples in the game, are just a commodity, with new workers being readily available to take the place of others who didn’t make it. It’s all about profits and making the most money. Unless you completely divorce yourself from the theme, you do really feel that as you play The Cost.

The game then ratches it up one notch. When the game ends, you don’t get penalised for the dead workers you have on your player board. There are no negative points, nothing. The designers intentionally didn’t want the game to get involved in the decisions you make. They didn’t want The Cost to chastise players. They wanted the players to make the decisions in the game themselves – and even though that’s probably one of the more controversial decisions the designers made, I do actually think it works.

However, to make it work, I think it’s vital that all players read the rulebook, especially the introduction and all the call-outs that describe how your actions in the game relate to real-life events and what the consequences were. Without that, the game could feel more like any other game where you just try to make the most money, even though I’d say that the artwork, such as the coffins at the bottom of player boards, are by themselves very clear as to what you do in the game and what effects your actions have.

Yet, when you read the rulebook and learn about asbestos, then play The Cost, you can see how the world changed from wanting as much asbestos as possible to some countries banning it completely, making it harder for you to make a profit. If you’re not careful and too greedy, you can even force an early game end. If too many workers die, it is possible that all countries ban asbestos, at which point it’s all over and whoever has the most money at that point wins. Otherwise, the game ends after four rounds – yes, only four rounds.

One last thing about the rulebook, before I close. I found it very hard to read, but once I set up the game and followed the steps through, it all made sense and the gameplay flowed really well. Yet, every player gets a double-sided A4 reference guide, which gives you an idea of the complexity of this game and that it will take a while to play well and quickly.

I also want to say that I have a physical copy of the game, but all my plays have been via the free Vassal module online. So I can vouch for the component quality of the game from the printed game I own, which is high and what you would expect from Spielworxx, and my experiences of the gameplay from my digital exploits.

So, let me finish by saying that it is very clear that The Cost was cleverly put together to create a mechanically interesting and challenging game, while treating the serious subject matter with respect and even trying to teach players about asbestos as they play. If you can stomach it, then I highly recommend you try The Cost for yourself.