We had all the plans ready, planning permissions had been sought and approved, contractors had been signed up, the project manager was ready and a rough schedule had been put together. We also knew what building materials we needed and where to get them, so it was time to build our Micro City by Thistroy Games. 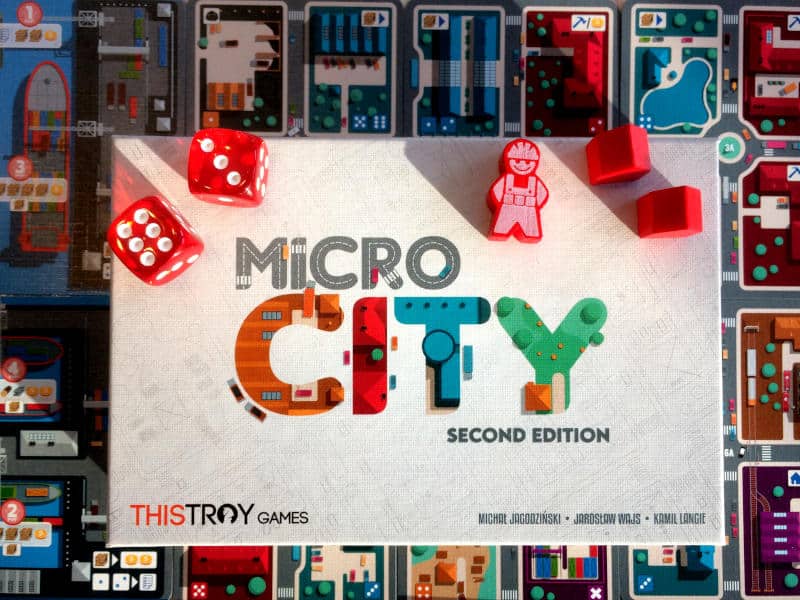 In this review, I’m actually referring to the 2nd edition of the game, which was published this year and apparently has some small differences to the 1st edition.

Here is another city building game that I have recently acquired. It’s also a small box game and is basically a deck of cards, some dice and some tokens. The game box is stuffed to the hilt with the components, but is still small enough to fit into a jacket pocket, your handbag or a rucksack. The footprint for the game itself is also relatively small and the rulebook says that you can play it on a plane, which I haven’t tried myself, and am unlikely to try for some time to come, but I can see that it would be possible. Already there are a lot of positives here for me.

Also, the games can be played in a number of ways: solo, 2-player co-operatively or 2-player competitively. I’ve played it in all three modes and I think they work equally well, but of course create slightly different game experiences. So here is another reason why you might want to have the game with you while you’re out and about.

Ultimately, the game is all about rolling dice and assigning them wisely. That sounds rather random, but you do have a great amount of control over the dice results. You can change the pip value of the dice as much as you like by spending the relevant amount of resources, which you can aquire during the game. The problem is, you also need those resources to complete your goals.

So it’s the usual push and pull between spending resources to get the dice values you need to get more resources or otherwise a bigger benefit than the cost of the resources you spent in the first place. Of course, if the dice rolls go your way, then achieving your goals is a lot easier – and I must say, there were times during the games I played, where it did feel that I was just lucky and didn’t have to do any work.

However, Micro City isn’t proclaiming to be a difficult game and I think it works. You will still find it hard to win in co-operative mode, even if all the dice roll in your favour. You still have to make some decisions and if you get those wrong, you will still lose. I think it’s a good balance and makes the game feel puzzly enough to keep you wanting to keep trying until you’re able to build your city before you run out of turns.

There really isn’t much more to say about Micro City. It’s a small-box game, brim-full with good quality components, which is pretty quick to play and will keep you entertained for a while.