It was going to be great. We were going to visit most of the USA and play to millions of people over a few months. It was going to be fun, but also a lot of hard work and the planning was the most difficult. In the end, we decided to roll the dice to decide what states we were going to visit in what order, but rather than making it completely random, we turned it into a little game. It would let us build an almost circular route, so we could finally go On Tour by BoardGameTables.com. 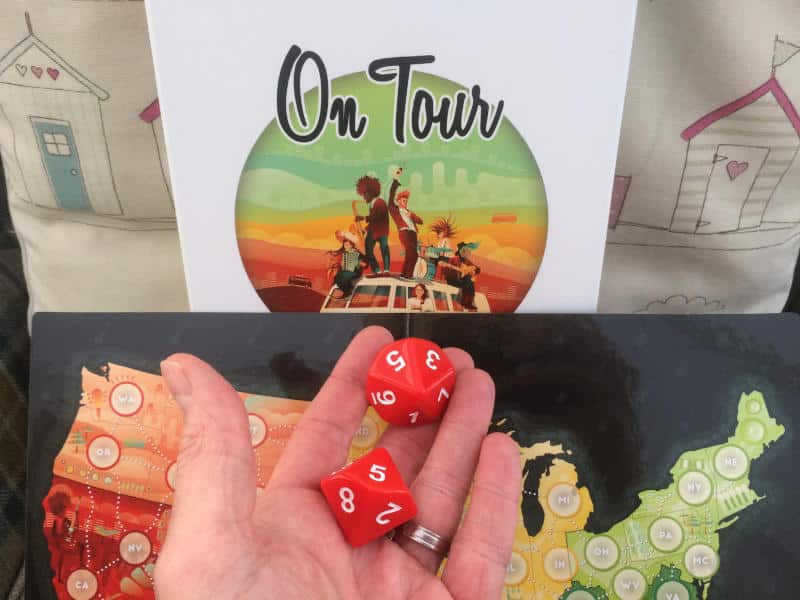 Of course, like most roll-and-write games, On Tour‘s theme isn’t much more than a thin veneer. Yes, there are two maps in the box, one showing the USA, the other showing Europe. However, that’s all there is to it and that’s actually a good thing, because the theme would really be more of a distraction than a help.

Ultimately, all you’re doing is roll two ten-sided dice, which give you two digits from 0 to 9. You then combine these two digits one way, then the other, to get two two-digit numbers from 0 to 99. Finally, you write those two numbers into two states on the map, which you can choose from those shown on cards that were drawn when you rolled the dice, and these cards limit which region or state you can write the numbers into. You get bonus points for writing numbers in the states shown on the cards, but that’s not always what you want to do.

That sounds already a little complicated, but in fact is really straightforward as you start to play. What isn’t straightforward though, is that you need to create the longest possible route of ascending numbers on the map, without having any crossing paths. In fact, that’s the fiendishly difficult part of the game and is what makes it so much fun.

You’d think, writing a set of numbers in sequential order is easy. You’ll set out with what you think is a great strategy. You decide to do a large circle around the map, so that the lowest and highest numbers are next to each other and then you string the others around the circle. You even start to draw on the map to remind you of the route you’re going to take. You’re confident that you can get the longest route.

So you roll the dice and the first result is a 1 and a 5. Not bad. 15 can go near the beginning of your route and 51 in the middle. The problem is, the cards that limit to where you can place your numbers don’t want to co-operate. They’re showing the east coast and the west coast. So fine, you put the 15 on the east coast and the 51 on the west coast. That should work.

The next roll gives you a 6 and a 7. That’s actually quite good and the cards help you too, giving you the option to put them on the west coast, somewhere near 51 and near each other. That’s great. In fact, you can put the 67 in a state shown on one of the cards, which will give you bonus points.

So you’re off to a flying start, but of course, things start to go downhill eventually. The map is filling up and at some point you had to put 87 next to 91, leaving no space in between. The next roll is a 0 and a 9. Wow! That’s bad luck. There is no room for the 90 and even the 9 won’t fit, because there is no card for the east coast. You end up putting both numbers out of the way in Florida. That’s a shame, but not the end of the world.

The problem is, the dice and cards continue to conspire against you. There are only so many 6 and 8 results you have room for. 86 just won’t fit and 68 will force you to do a detour. It’s all starting to fall apart.

As you can see, On Tour is really a rather simple game, as far as the rules are concerned, but when it comes to placing the numbers, the game gets trickier the further you get into it and you have to start finding detours and alternative routes, or abandon some numbers altogether and assign them to the rubbish heap.

All the time, you’re also checking what the other players are doing. To start with everyone is probably doing something very similar, but eventually players will go their own way, because they think they’ve spotted an opportunity. It’s fascinating to see, actually, because you think the easiest way to play this game is to simply copy another player. However, at some point you’ll think that you can do better than them and just do your own thing.

So, if you’re after a quick and easy roll-and-write, then On Tour is well worth giving a go. I’m not a great fan of roll-and-write games, but I do enjoy this one, which is saying a lot.