Your 8-bit computer may seem to be collecting dust in your loft, but actually, there is still a lot of life in the old box yet. Two of the microprocessors, Mikro and Chip, are keeping themselves amused by playing little, fun games. After all, their buffers and memory stacks are still in working order. With a handful of assembly instructions, they keep each other entertained: push, pop, peek as well as some Mini Memory Mischief by Atikin Games. 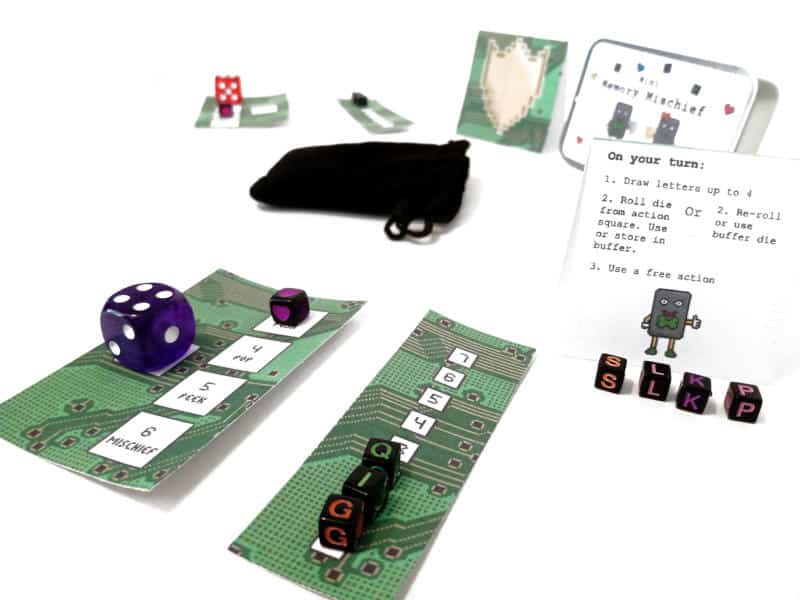 Here is Atikin Games’ second release, also being published with the help of Kickstarter, and from what I can see, this is a lovely, light game for two players, that is lined up to become another success for the one-woman publisher.

As many of you know, I love mint tin games, so you know I’m going to be biased when I talk about Mini Memory Mischief, which comes in a standard size tin, but with a sliding lid, rather than a hinged one. It makes it feel very smart and luxurious and will ensure that all the components are kept safe, allowing you to take the game with you everywhere.

I was given a prototype of the game, so there will be more tweaks made to the components and therefore please check out the details on the Kickstarter page, but there are going to be two dice and a small bag with 26 tiny cubes, one for each letter of the alphabet. There will also be a tiny rulebook, two player shields, behind which you’ll hide your letter cubes and two tiny player boards. The tin will be full, that is clear.

In the game, you’re trying to arrange your letters alphabetically to score points. The problem is, you need to use old-fashioned 8-bit assembly commands to achieve this – and you constantly draw new letters from the bag, meaning you can never plan too far ahead.

Now, don’t worry. If you’re not a computer programmer, you can still play this game. Just imagine a stack, like a stack of cards, that starts empty, but on your turn, you can put one of your letters on it, and on the next turn another one on top of the first and so on, until the game ends. However, instead of ending up with a stack of cards, you have a line of letters in front of you. Every letter that is in alphabetical order gives you one point and every letter in the wrong order means you lose two points.

That’s simple enough, but the problem is that throughout the game you only ever have four letter cubes in your hand. So you have to decide whether to wait for letters that are earlier in the alphabet or if you just go for it and start with whatever the “smallest” letter is in your hand at the moment. So if you start with an A, then that’s great of course, but if you have a G, it’s not so obvious what to do.

Things are made even more complicated, because you only get two actions on your turn, one of which is randomly decided by a dice, the other you can choose, but it has to be different from the dice action. You can choose not to carry out the dice action, but it’ll slow you down, yet that can sometimes still be better than messing up your alphabet stack.

The other player tries to achieve the same goal at the same time as you and you’re both drawing from the same pool of 26 letters. That is actually quite helpful, because if your opponent puts an A on their stack, then you know that you can’t also get an A, which helps you decide whether your G is actually not so bad a start as you thought.

There is also a fair bit of player interaction. Everyone’s letters are kept secret until they’re pushed onto the alphabet stack, but you have an action to peek at the opponent’s pool and as long as you remember the letters, you can even force them to put one of their “higher” letters on top of their stack, ruining their plans. You can even push one of your “higher” letters onto their stack. It’s mean, but because everyone can do it, I think it doesn’t feel quite so bad.

The game plays really quickly, is easy to learn and not too taxing, but still offers you a fair amount of tactical thinking and decision making. You constantly rattle off the alphabet in your head to work out how “high” or “low” your letters are and check what letters are already out, so that you can play yours at the right time.

It’s actually the perfect game to play with your children to help them get better at their alphabet. I think a 10-year-old can play this game quite easily and even younger kids will probably pick this up quite quickly. So even though it’s a 2-player only game, it’s one that I think the whole family would enjoy playing. Given how quickly it plays, it would be really easy to set up a little competition where everyone plays everyone and whoever has the highest score at the end wins.

So Mini Memory Mischief is a great mint tin game that’s fun for all the family. Put it in your jacket pocket and play it anywhere – but back the Kickstarter first of course.