The task in hand wasn’t going to be simple, but the rewards were huge. You could become ruler of Naqala if you were able to influence the people of the land to help you reach your goal. You were hoping to get the help of the djinns, but they would only listen to you if the people were on your side. It seemed impossible, but you knew that you could talk to each group individually and over time you would eventually have the help of all of the Five Tribes by Days of Wonder. 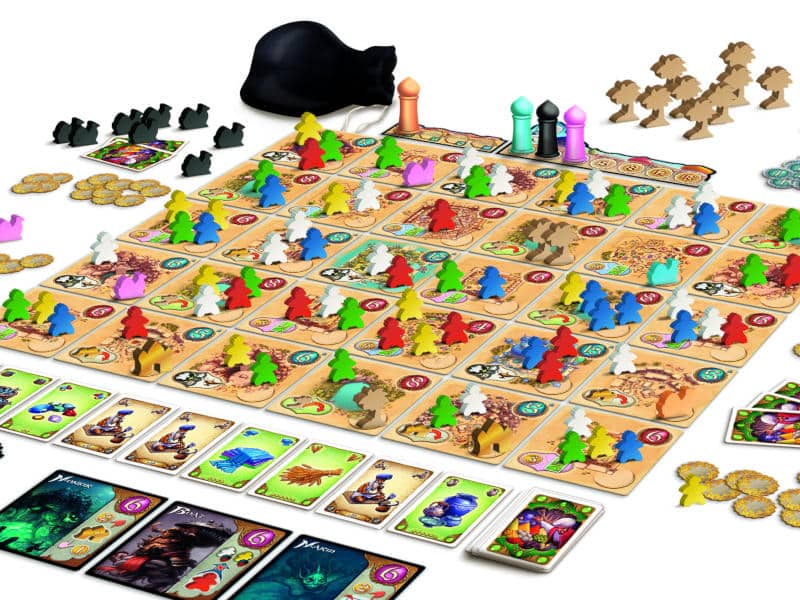 Here is another game where the theme feels stuck on and not actually particularly integral to the gameplay. What you’re really doing is playing a kind of Mancala, but instead of going in a circle, you move the differently coloured pieces around a randomly created board. I appreciate that Mancala is too abstract for many people, but even though the theme is attractive at first and will want you to take a closer look at the game when you’re at your friendly local games store, along with the gorgeous cover art, in the end, the theme really doesn’t help with the gameplay.

You’re just picking up a bunch of coloured meeples and deposit them, one by one, from square tile to square tile until you run out. The colour of the meeple you place last decides what action you can then take. So there are the viziers, elders, builders, merchants and assassins, and the elders allow you to get control of a djinn, while the assassins allow you to kill other meeples, removing them from the board, and so on. All very thematic, for sure, but you can never quite remember what colour is what type of meeple.

Some will probably stick in your mind: red for assassins and white for elders. Yet, when you play the game, you probably will always just say that you’ve got some red meeples and want to kill a white meeple that one of your opponents has. The djinns are also just a way of giving you special actions you can carry out, which doesn’t feel very magical at all.

At the end of the day, this is a game all about area control and planning ahead – and it’s a lot of fun and will make you think quite a bit. You do have to think about which group of meeples you pick up and how you deposit them around the board, so that you don’t give the other players an advantage while still giving you a few options on your next turn. It’s sometimes quite tricky to work out what you want to do, especially during your first few games, but when you have found the solution, it feels actually really great.

There is also a set collection element to it, which I don’t think was necessary, but does add a bit more variety and another opportunity to make points and possible take the win.

The game offers a lot of strategic thinking, but also has a lot of tactics involved. It will really suit people who like these sort of thinky, abstract games. It’s a puzzle that will really challenge your brain. However, I’d still think it’s a family game, mainly because of the theme, be it for slightly older kids.

There is plenty of replayability in Five Tribes. The board is randomly assembled from a set of square tiles and there are 22 djinn cards to keep you busy. There are also 54 resource cards to give you plenty of variety for the set collection part.

So Five Tribes is a bit of a jack of all trades, offering players a variety of things to do and focus on. The artwork is wonderful, the components are really good quality and overall Days of Wonder have done a really good job.