The air is still and the sky is mostly clear. There are only a couple of fluffy clouds and sparkly stars fill the firmament. The forest is flourishing, stocked with many great, big trees with long branches colonized by many fragrant flowers, marvellous mushrooms, wriggly worms and fantastic fireflies. You are proud of what you have achieved in the three preceding growing seasons. It wasn’t easy to decide how to grow each tree so that it would be in harmony with nature and be inviting to a varied flora and fauna. Yet, you did it. You pleased the spirits of the forest, the so-called Kodama: The Tree Spirits by Action Phase Games. 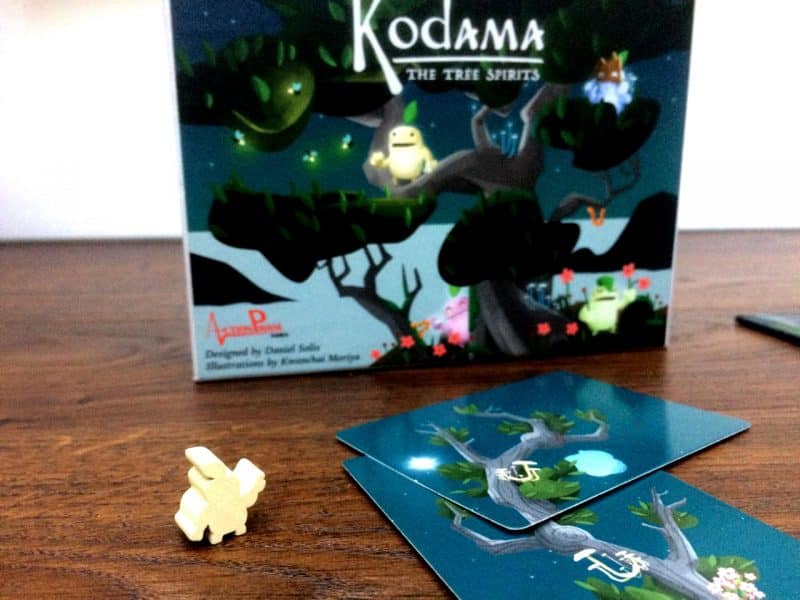 I can’t believe how long we’ve had this game in our collection at home. It’s been played a lot of times over the years: by my wife, daughter and I; with friends and family; and again recently by my wife and I. It’s such a lovely game that hasn’t lost its charm, despite its age. It is very gentle, even if players try and hate draft, because chances are the next card will be just as useful as the one just taken, or the others available will also be good.

It feels very therapeutic when you attach each branch card to your tree’s trunk or extend an existing branch. You can see how the tree grows as you play and see how the creatures and plants flourish with each turn. You want to place each card just so. You want to create a wonderful tree that feels as if it grew organically.

I suppose Kodama: The Tree Spirits speaks very much to the gardener in me, but I think many of us feel a lot of satisfaction and a level of creativity, maybe even an element of being in control, when we adjust each branch card to create the perfect picture.

Even for those who don’t respond to the theme and are purely playing to maximize their points, there is plenty of thinking to be done to ensure you get the longest chain of features on your tree, without going over the 10 point limit. You need to look at what cards are available and decide whether you extend a branch’s existing features or start a new collection to give you more points on your next turn.

Speaking of the 10 point limit, it is what ensures everyone has a chance to catch up and nobody falls too far behind. It is also a game that is very easy to teach and learn, opening it up to a wider audience, but without making it feel too simple and boring for more experienced players. That’s what makes Kodama: The Tree Spirits a game that is kind to all the players and makes it feel so friendly and almost calming.

The game has aged really well. The range of angles that your played cards create and the different amounts they overlap produces this organic feeling of the game and that I haven’t seen in any games since – or before. You’re usually limited to right angles and specific amounts of overlap that creates a rigid structure, which Kodama: The Tree Spirits completely ignores.

There have been more Kodama games in the series since the original game, all exploring the same world in different ways. There is even a 3D version now, which creates another level of complexity and enjoyment, but that may be too much for some people. I think the original Kodama got it right, focussing on two dimensions only. It is quite enough and the finished trees actually feel more realistic than in its 3D sibling.

So my enjoyment of the game is exactly the same to when I first played it. It is still a great game in a small box with beautiful illustrations that people of a wide range of experiences can enjoy. It still comes highly recommended.
If you enjoyed this article, please hit the like button below and subscribe to my blog. It would help me a great deal. It would be even better if you also told your friends about me.