We all love high quality, gorgeous game components. Chunky dice, metal coins, thick cardboard, linen finished cards, detailed miniatures or custom meeples. However, what we often forget is how components are used in games. We all know about rolling dice, playing cards and placing workers, but there are other, much more inventive ways of using components in games that can make playing them more memorable and exciting for us and it is one of the things that I am always keeping an eye out for. 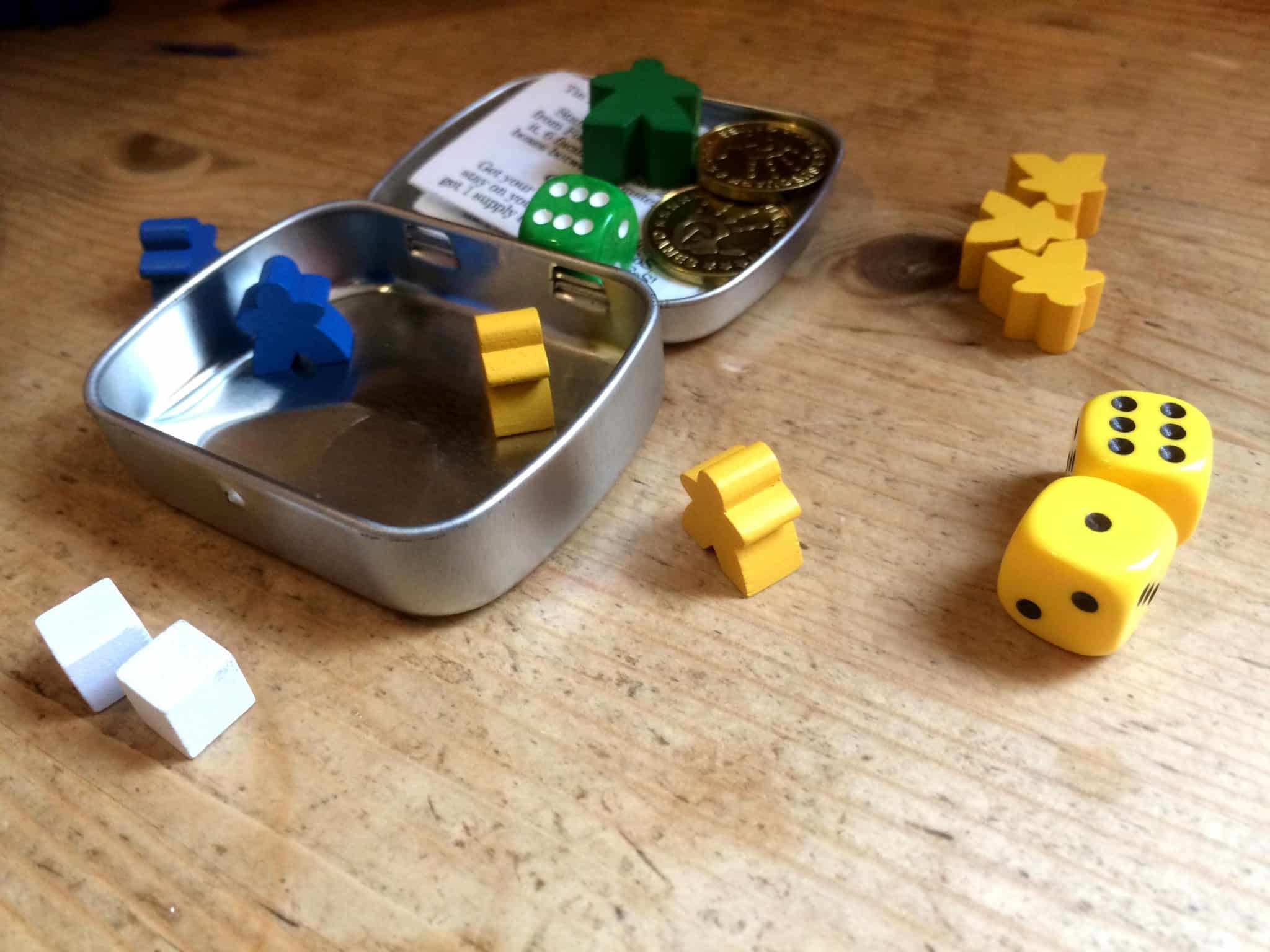 Let’s start with some obvious innovations in the use of game components. I think the role of dice has changed quite a bit in the last few years. They went from being a simple way of choosing an action or ability at random by rolling them, to becoming a much more integral part of gameplay and putting them centre stage, rather than just being left on the sidelines.

Dice have now become workers in their own right. In fact, they’re better workers because they can record a certain property of a worker, such as strength or speed, on their die face. Two dice showing different numbers can represent two workers with different abilities, and you can change the number to increase or decrease that value, making the worker more or less powerful. Previously that would have only been possible by placing multiple workers on the same space to represent their strength or using different size workers. Dice make this a lot easier.

Dice have now also gained a stronger dexterity element. Rolling dice without them falling off the table may already be considered as requiring a certain knack, but now dice are stacked, sometimes to great heights. In fact, sometimes the opposite is true and you have to carefully remove dice from a stack to be able to carry out a certain action. As before, dice showing different numbers can represent different abilities or may limit the player what dice can be stacked on top which other dice, in ascending order for example.

Speaking of dexterity, wooden components that may have previously been used as workers are now also used for stacking. Custom meeples that represent circus performers or builders combined with more classic wooden shapes, plus a time limit and a certain objective, such as “make the highest tower”, create a very fun and tricky dexterity game. In fact, often these games aren’t simply about stacking, but there is also an element of balancing components, which creates another facet and another interesting angle on the same idea.

Cards have also gone through an evolution. Their original role of being stacked in a draw and discard pile, being held to represent your hand and being laid out in front of you to represent sets or tricks is still popular, but there are many games where cards are used more like dominoes or they are overlapped to cover up certain areas while combining other areas to create large sections of the same type.

The overlapping of cards is also often used to create a different way of drawing cards. Rather than having a deck of cards, where you can only take cards one by one from the top, or the bottom, cards are now often laid out in a sort of pyramid shape, so as you draw more cards, you reveal more options, creating a sort of tech tree.

Cards are also often used to create maps of some sort, just like tiles have been and are still being used, and tokens, meeples or miniatures are placed on them to represent the production of resources or the movement of people and workers. Cards are thinner than tiles, allowing you to have more of them in the game, without requiring a much larger box, which in turn provides more variety in the resulting maps that are created during gameplay.

Decks of cards can also take the place of dice in games. While dice rolls give you a result with equal probability from the complete set of options every time, if you use a deck of cards, you can emulate the same behaviour as dice, but you can also allow cards to be discarded, therefore changing the chances of a certain result each time the deck of cards is depleted further. So while you have an equal chance of getting a certain result when the deck is full, later on you will know which results are no longer in the deck and can therefore make more reliable and meaningful choices, while still retaining an element of randomness.

The use of paper has also changed over time. It started as a way of recording scores, stats or other information. In the case of scores, paper score pads became very popular and are still found in many games, in particular the recent resurgence of roll-and-writes, flip-and-writes and the many other variants that have emerged. The latest way of using paper in this genre of games is to cut it. You physically cut the paper into certain shapes, which can give you some intuitive constraints, such as not being able to re-attach a cut section or making it hard to cut out a section in the middle of the paper. Cutting also creates a different game experience when compared to writing on paper.

Folding paper is another option, which is quite popular in escape room style games, which allows you to overlap, hide or connect different sections of the paper and whatever is printed on it. Folded in the right way you can reveal a solution by combining two halves of a shape for example. Folding and maybe glueing also allows you to create three-dimensional shapes, which is yet another interesting experience that a game can offer.

What fascinates me the most though, is the use of the game box itself. Most games use the box simply for protecting the components, a way to market the product in shops and giving the customer a way to store everything neatly. There are very few games where the box is actually an integral part of gameplay.

Some games use the box as a dice tray, so you can safely roll dice, which is great. Some games take this further by printing onto the inside to outline certain sections or areas, which you try to get your dice to land in. That creates a great dexterity element and makes the box itself a vital part of the game itself, which you can’t do without.

The box is also sometimes used as terrain, giving the game a three-dimensional presence on the table and allowing you to place characters or tokens higher up than others, which can then be used as way of giving them an advantage or creating the idea of line-of-sight.

Rather than as terrain, boxes can also be used as a location that you need to put tokens or workers into. It creates a distinction between inside and outside the box, which can represent advantages or disadvantages for the tokens that are in one location or the other. How you get into or out of the box can be decided by various mechanisms, including dice rolling, playing cards, etc.

In fact, boxes can have a map printed inside, which can replace the traditional game board or can be in addition to it. You can make it even more varied if you provide inserts for your box which can be used as terrain for example. Again, now the box is absolutely integral to gameplay, because without it you’re missing a vital part of the game.

I am sure there are many other ways in which game components can be used in a clever way. Is there anything you can think of? Have you come across games that use components in a different and interesting way? How did that make you feel when you played the game? If you’re a designer, what ideas have you got for using your game components? Please share your thoughts in the comments below.