Feudal Japan is in turmoil. Warring clans are roaming the land to claim territories and gain influence and power, while vying for the favour of the spirits, the Kami, whose support will help cement the superiority over the enemies. As clans form alliances and recruit legendary monsters to bolster their armies’ ranks, everyone prepares for multiple battles which will change the face of Japan. Yet, territories are often held only fleetingly as alliances are betrayed and powers shift. It is up to you to use your cunning and strategic planning to come out the victor in Rising Sun by CMON. 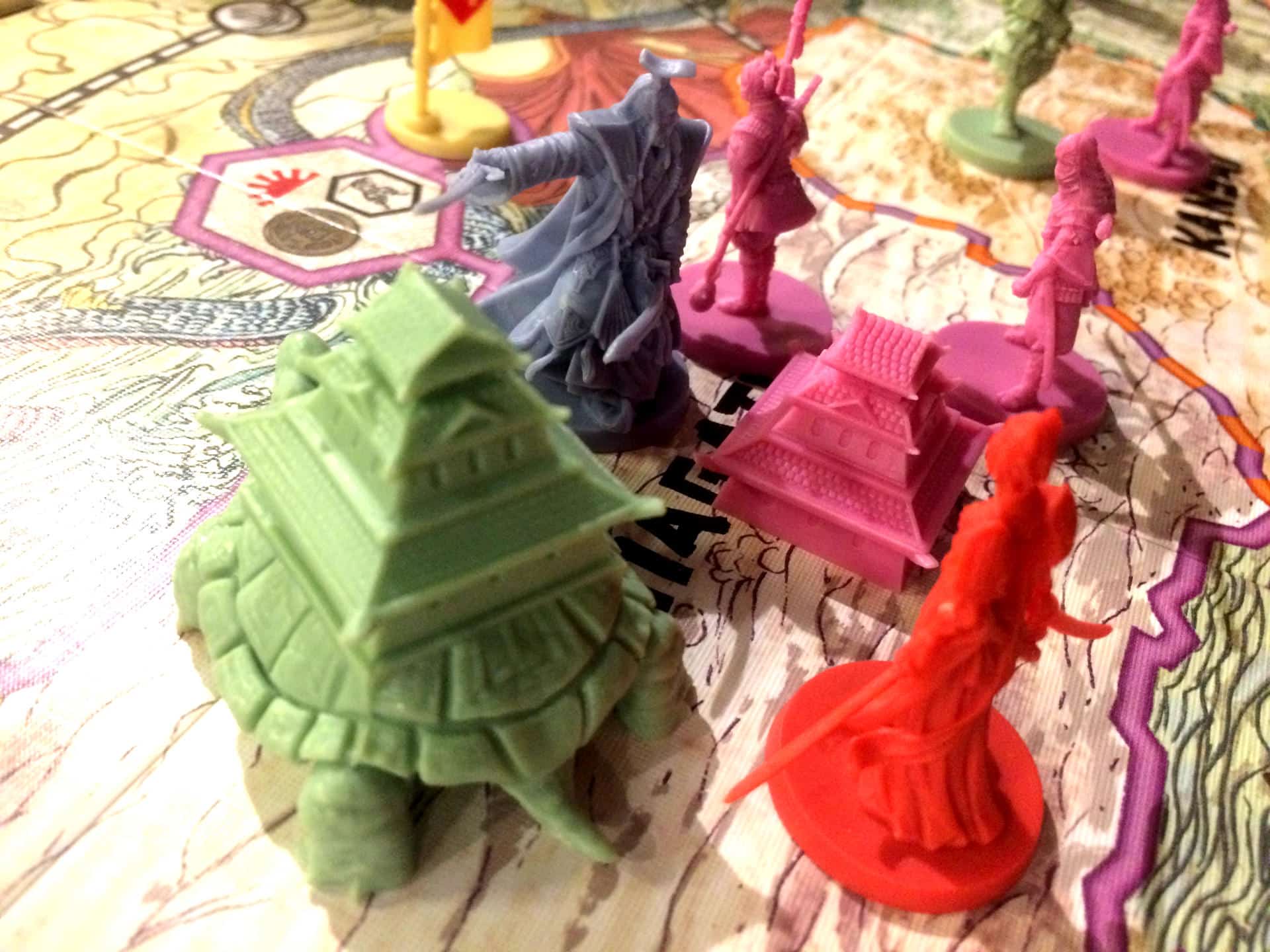 Here is a game with epic battles and epic minis alike. It also comes with a giant game board, which is beautifully illustrated, and a huge set of cards. Overall the table presence is amazing – and unless you have a giant table, chances are there will be no space for drinks or nibbles. Every inch will be filled by the game, which really shows how much attention this game demands.

There are a number of elements to Rising Sun. First of all, we have the concept of alliances, where two players can declare their allegiance, which will give them the comforting feeling of strength that comes with helping each other, and also some actual, if small, benefits during gameplay, whenever they or their ally take certain actions. However, alliances can be broken – not only when a player may decide to act without their ally’s approval, but also when one of the allies plays a betrayal action. In fact, some factions really benefit from forming temporary alliances that they then break without fail each year.

The other interesting element is the area control of the various regions on the map. I love deploying my figures and moving them around. These manoeuvres have no immediate consequence. Having a majority in an area really only has a bearing when a harvest action is played, and when the battles take place, your majority will not guarantee you victory. You’re constantly hinting at your plans, only to surprise your opponents at the last minute. You also have to always bear in mind the order of battles, to ensure your armies are taking part in the right battles, to give you the most benefit.

Battle is the last element worth note. Rather than rolling dice or counting the strength of your armies in each region, a betting phase ensues. Each battle is divided into a number of different phases, each of which you place a number of coins, if any, depending on whether you want to win that phase or not. You can even bet on killing your troops in the region, if the situation is desperate and you benefit from dying with honour.

As the spiritual successor of Blood Rage, Rising Sun promised brutal battles with giant minis of immense power, yet Rising Sun is a bit of a disappointment in that respect. Don’t get me wrong. I love the war phase, where every player secretly bids on the different phases of a battle. Here is where you need to think ahead for yourself and also check what your opponents are up to. If this is their last battle, they might bet everything – but if they have other and possibly more important fights ahead of them, they might be more tight with their money, which could give you an advantage.

The battles are also where you need to bluff and present yourself in such a way as to influence your opponents so they act in the way you want them to. Show strength and confidence if you want them to shy away from attacking you – or pretend to be weak or uninterested in this battle, making your opponents drop their guard and not bid as heavily as they should have. It is a lot of fun and probably my favourite part of the game.

However, the big disappointment in battle is that you can take monsters hostage. These giant minis with seemingly immense power don’t seem to be the sort of creatures that you can tie up and bundle away easily – if at all. It seems to make no sense thematically, but strategically creates a lot of depth. Just because you have a monster or two on your side, doesn’t mean you will easily win the battle. Even a single enemy figure can potentially take it hostage and therefore be victorious. It is something you will have to consider very carefully.

The other thing that I don’t like about the game is having to remember what every monster does, what powers it has and in what conditions. If you can’t remember that, then you will have to ask at the beginning of every battle at the very least, if not more often, because you do need to think what you can do to neutralize the monster, or if you are better off retreating into a neighbouring territory. It really slows the gameplay down in my view. It would have been great if each monster came with some basic stats, such as their power, on its stand, so it’s there right in front of you.

However, Rising Sun is a game that I will always happily play, despite what I have said. The negotiations during the tea ceremony to form an alliance, the bidding during battles and the strategic elements of deploying your units on the map and moving them into position, all make for a great game.