In a future where mankind has resolved to abandon war and replace it with virtual battles, teams of nine elite fighters selected by their nations face each other in pairs to win a precious new energy source that promises to bring the world back from the ashes. You have the opportunity to lead one of these teams out onto the 3 by 3 grid, where you take turns with your opponent and carefully occupy key positions in the hope that you win battle after battle to become a hero of the Vector Wars. 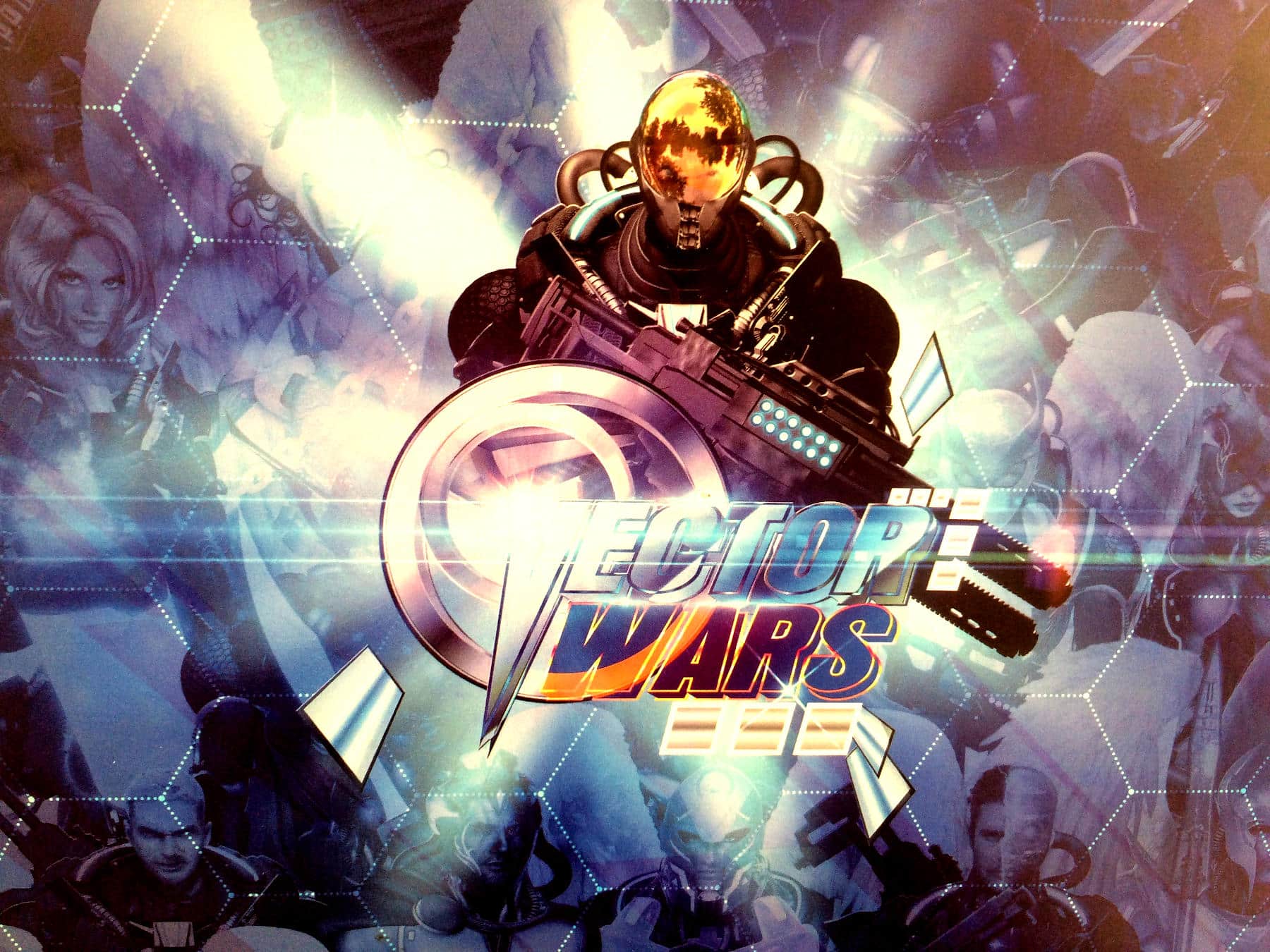 The backstory to the game reminds me a bit of Tron mixed in with Speedball, which was one of my favourite games in the good old days of home computers, yet overall Vector Wars feels much more like chess, be it a game of chess on steroids, and with some elements of Stratego. There are a lot of great mechanisms that make gameplay so interesting, so Eli Mamane has done a really good job.
Let me give you some examples. As you play your characters into the grid, you need to decide where to place them. You’re quickly reminded of Tic-Tac-Toe, so you might think that occupying the centre space is of benefit. However, being in the centre also means you’re more likely to have to fight more opponents, so you better choose a character that has good stats – and that’s the next decision you have to think about.
Each character has four different stats – one on each edge. So a character might be strong on the top edge, but less strong on the others. That means you might prefer to place them near the bottom edge of the grid, so that your opponent can attack from behind. In fact, you might want to place them in the corner, to give them protection on two of the four sides.
You play each character face down, but you always have the option as a free action to flip characters face-up. That might be fine if your character is powerful on all edges, but you might want to keep your stats secret as long as possible. Yet, if you do that, and if you play your character in a corner, then your opponent might guess what you’re up to – and it is this that creates a very interesting interplay between players. You don’t want to give too much information away, yet you also want to dominate the board.
There are also ways of buffing up your characters’ strength. You can either create a fortification on one side, or increase a character’s power overall. In both cases, you roll a die, which introduces an element of chance. I know people don’t like chance in strategy games, but I think in Vector Wars it works, because it adds enough uncertainty that creates an element of suspense to spice things up a little.
You can also buy special weapons or other powers from a central market row, which again adds some more randomness, because you can’t predict what cards may come out next – but you can, of course, control when you want to buy cards, or if you want to flush the whole row and get a new selection. Again, this works really well and is a mechanism you will have seen in other card games.
The game is also set up differently each time, dictated by a card you draw from a setup deck. It means that money and other bonuses appear in different places each time, so you have to adjust your strategy accordingly. Mind you, the game is less about strategy, but much more about tactics. There are four different factions in the game, where the team’s characters have different abilities, so you will want to follow a certain overall strategy, but after your opponent’s turn the game state will have changed enough that you have to reconsider what you do next.
As you play the game for the first time, you realize very quickly how much more there is to learn. Vector Wars is certainly not a game you want to only play once or twice. You will need to play it a lot to learn how each faction works and improve your overall strategies. That’s why it is a lot more like chess or similar games that require you to spend a fair amount of time learning something new with every game.
I am certainly intrigued by Vector Wars, and if you like two-player strategy games, then it’s one you should keep an eye on. It’s going to go on Kickstarter, but in the meantime you can follow the Facebook page to stay up-to-date.

Update (2 October 2019):
The Kickstarter campaign will start soon and you can sign up for updates here: https://www.kickstarter.com/projects/meeplecitygames/vector-wars-0

If you like this article, please like it and subscribe to this blog. It would help me a great deal. It would be even better if you also tell your friends about it.

If you like this blog, my videos, podcasts or my other work, you can buy me a coffee via Ko-Fi. I’ll post a photo of it on my Twitter feed so you can share it with your friends: https://ko-fi.com/tabletopgamesblog

Please also consider supporting me on Patreon for ongoing, monthly support. Even the smallest pledge is highly appreciated: https://www.patreon.com/tabletopgamesblog
Thank you!