I haven’t yet reviewed any pure print-and-play (PnP) games, but Alex Bardy contacted me via Twitter and sent me a complimentary copy of Minty’s Bootiful Football Game. I decided to try it and wasn’t disappointed. As the name suggests, it is a mint tin game all about football. Now, I love mint tin games, in case you hadn’t noticed, but football isn’t really my cup of tea. Yet, when I played this game, I actually really enjoyed it and did get the feeling of taking part in a real football match – but let’s start at the beginning. 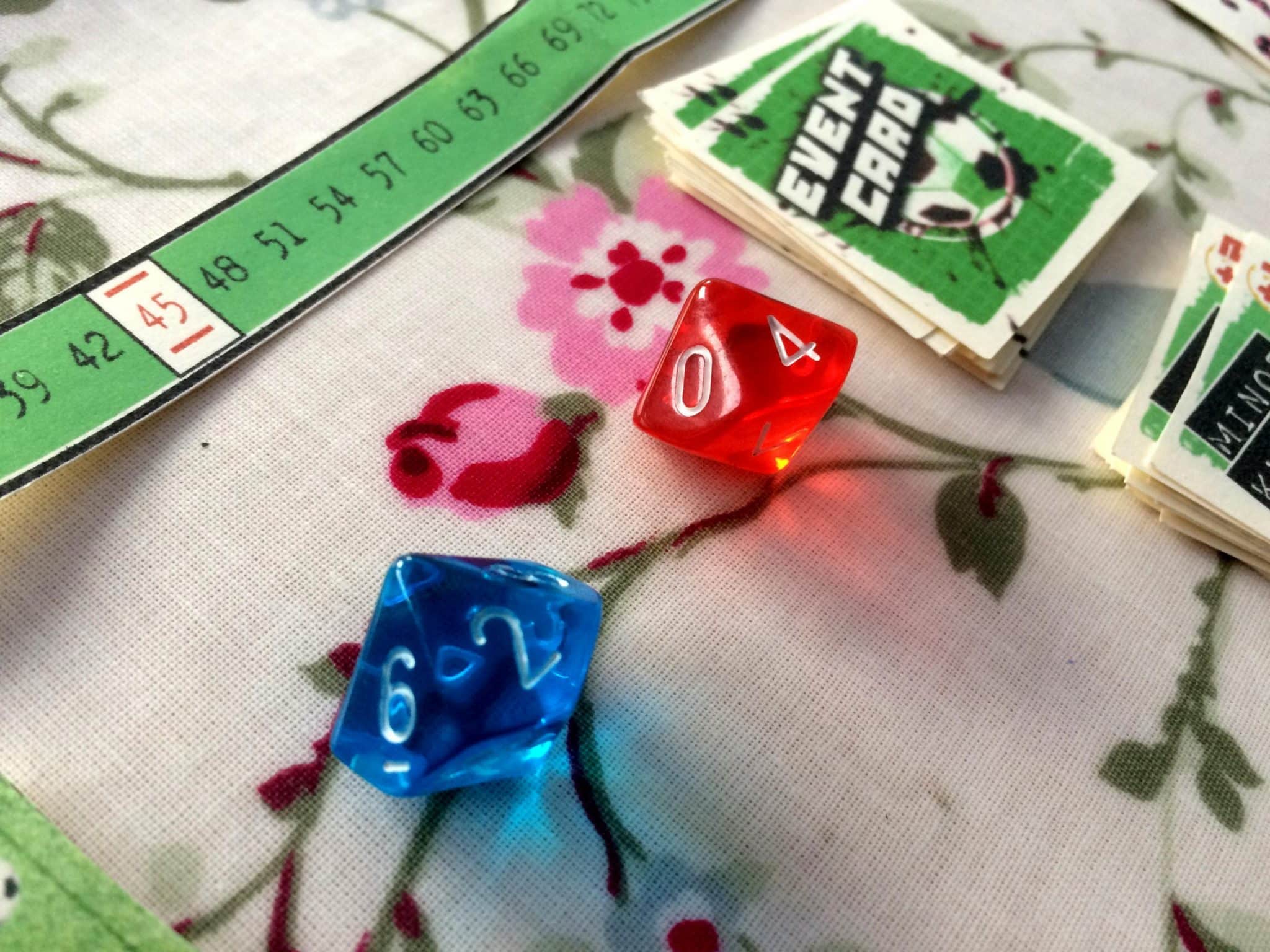 As I said, this game comes in PnP format and you can download it from the game’s page on Boardgame Geek (see Links below). It’s always amazing when people, like Alex, offer their games for free. He also makes up small batches of the game and takes them with him to conventions, or you can contact him and he’d be happy to send out a copy to you, for a fee of course to cover materials and postage. There are also thoughts about a Kickstarter, but it’s all in the early stages. Alex would prefer a publisher to take the game and make it a reality.

As you can tell, Alex is really enthusiastic about the game, and when you set it up and play it, you really feel how much time and effort has gone into the rules and the gameplay. The game has developed quite a bit over time, and I believe he is still making tweaks here and there to improve it further. Yet, already it is a fun game that really gives you the feeling of playing a real football match.

During setup players get a random selection of 15 players out of a pool of 21, each represented by small, square cards. You then select 11 of the 15 to make the team, plus four substitutes. The players are divided into goal keepers (you get to redraw if you happened not to draw a goal keeper), defenders, mid fielders and forwards. Each player has a number printed on the card to represent the skill level of the player. You then decide to split up your team, with one goal keeper and at least two defenders at the back, and then at least two mid fielders and two forwards – but you can decide how many players you put in the different areas.

You are allowed to put people into different positions, so a defender could become a forward, but their skill level is reduced by one, to represent the fact that they’re not playing in their usual position. If you were lucky, you will have drawn one or two all rounders, who can play in any position, other than goal, and they don’t get their skill level reduced.

Once both players have selected and arranged their teams, the game starts. Each turn represents 3 minutes on the clock. The ball starts in mid field, as you would expect, and the player with possession basically tries to pass the ball forward. Whether this succeeds or not is based on a dice roll of two ten-sided dice. The result of both dice is added, and then you include the difference in skill level between the teams in that area. For example, if my mid fielders have a total skill level of 17 and the opponent has 19, then I have to subtract 1 from my dice result – it’s 17 – 19, which is -2, divided by 2, which is -1.

It gets a bit mathy here, which slows down the gameplay a bit, but once you have played a few turns, you will get used to it. The best way I found was to line the players with the same skill level opposite each other, so it was easy to see the actual difference in skill level between my and my opponent’s players in the relevant section of the pitch.

If you succeed, the ball gets passed forward, or if it’s already in the forward position, you score a goal. If you fail, possession passes to the other player, at least usually. You actual draw an event card which might give you a lucky bounce, allowing you to keep possession, or the ball gets passed back to defense, or there is an injury, which adds injury time, etc. The game continues to half time, plus injury time, and then you do the same in the second half.

Both players are able to use a number of bonus actions before they roll dice, which influence the outcome of the dice rolling, adding to the total dice score or reducing your opponent’s result. It allows you to control some of the luck that pure dice rolling would otherwise create.

However, the game is still a dice rolling game, and I know this isn’t for everyone, but I enjoyed it. You feel a bit like a football manager, deciding when to use your bonus actions, whether to change the line-up based on the event cards, or whether to bring in substitutes. You do also get more excited as the time nears the 90 minute mark, hoping that you can catch up with the other team who are a goal ahead of you. You might risk it all and move more players to midfield and forward positions so you can keep possession for longer and increase the chances of scoring a goal, while your opponent might pull players back into defense to thwart your efforts.

As I mentioned before, Alex is still tweaking the game, and there were a couple of things that I think could be improved, like having to work out the difference to adjust your dice score – but that didn’t detract from the fun I had and the feeling you get of being in a real football match. Given that this is a free PnP, I would say you should try it. You just need to add a way of keeping track of your scores, which you can easily achieve with two six-sided dice, and you need two ten-sided dice for the main gameplay – and I reckon you can get all of these from one of the games in your collection, or you can buy them cheaply from your friendly local games store.

So thank you again to Alex for sending me a copy of this game free of charge. I really enjoyed it and I hope he can get it accepted by a publisher who can refine it some more, add some cool artwork and then package it all in a mint tin. However, as it stands it’s already a really good game, and I’m very honoured to have had a chance to play it.