Don’t get me wrong – I like heavy games, where you have to plan ahead and think about every step. I particularly like strategy games where you can outmanoeuvre your opponents by choosing your tactics wisely and making the right decisions at the right time. I enjoy it when I make steady progress and my position becomes stronger on every turn. It feels very satisfying when everything snaps into place and your earlier choices allow you to continue down the same route and everything just flows. Yet, it usually takes me quite a while to get good at a heavier game. 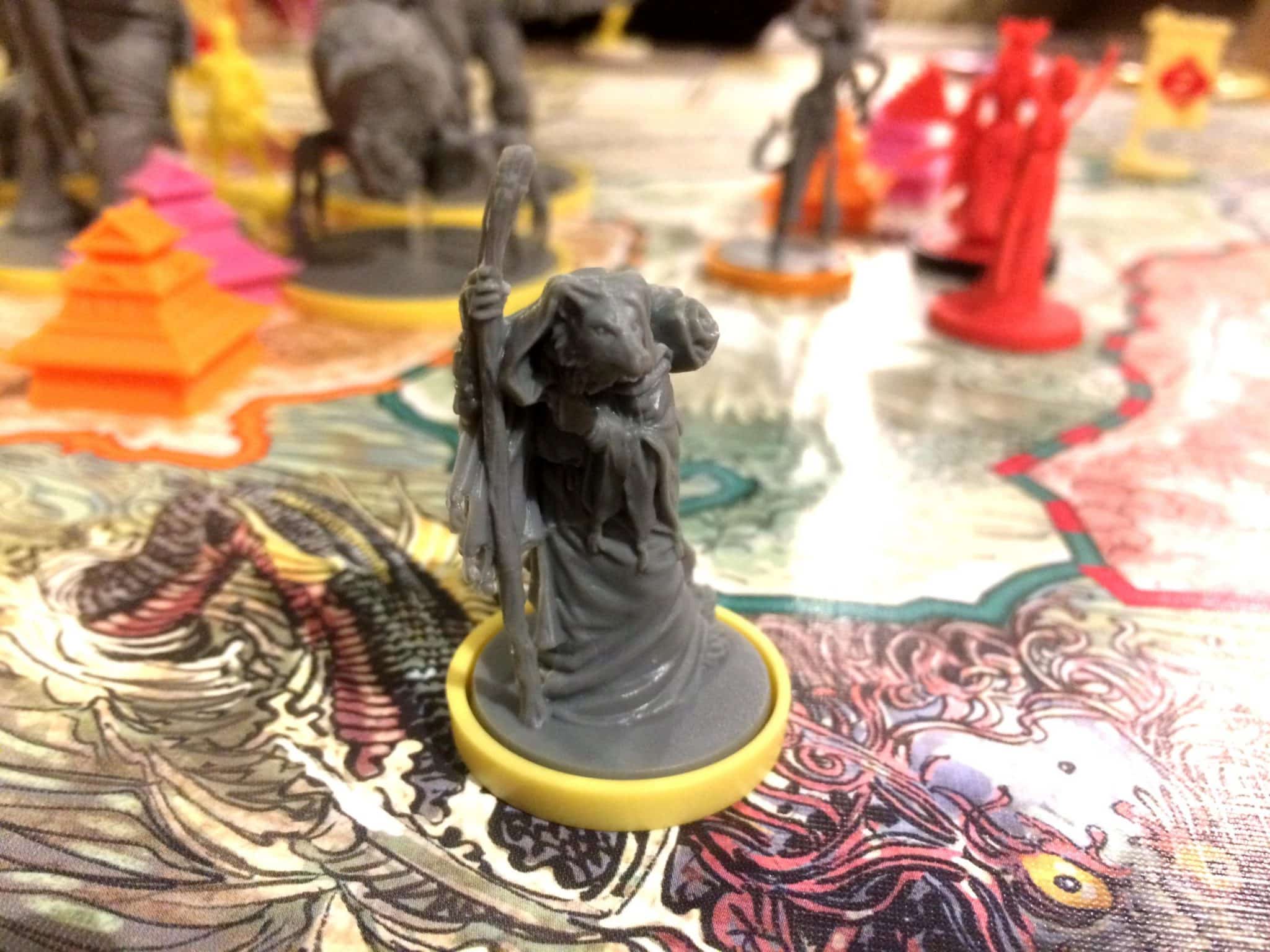 Let’s take Rising Sun as an example. When we first played it, I could see that certain positions on the board were more advantageous than others. The logistics of moving figures around and controlling certain areas is something I enjoy and that tends to come naturally to me. Making alliances and choosing the right political mandates was also something that I understood pretty much immediately, and I was able to adjust this based on the clan I played.

However, what I struggled with were the season cards, which give you certain abilities or bonuses at certain stages in the game. Understanding what actual benefits each card offered and how the cards compared to each other took me quite a number of games. I think I struggled with deciding whether an ongoing benefit was better than a bonus that I could take advantage of later in the game, because I had no comparison to hand. I couldn’t decide whether coins before the war phase versus a discount when buying other season cards was the better choice.

Other games create a similar puzzle for me. In Scythe I struggled for a long time to understand how to take advantage of each faction ability, rather than play each one in a generic way, and therefore wasn’t doing very well. I ended up researching the factions on Boardgame Geek, because I just couldn’t work it out, even after many plays. I was just unable to analyze what made each faction tick, and that was very frustrating.

I didn’t mind losing Scythe, but didn’t enjoy not being able to understand how to make the game work. It felt like I was making almost random choices, which is fine in a game where randomness is the main feature, but in a strategy game it is really frustrating. I suppose it is like anything that you’re trying to learn. It is great when you make progress and slowly understand more and more about what it is you’re learning, but when you reach a point where you’re not improving and you have no idea what it is you’re doing wrong, you no longer enjoy it.

So for me it was fine to research Scythe and learn it that way. You could argue it was cheating, but the other option would have been for me to stop playing the game altogether, which would have been a shame, when my friends clearly enjoyed it and were playing it really well. So instead I learned from what I found online and soon started winning the game, which was very satisfying of course.

Yet, there are still plenty of games where it just isn’t clear if an immediate benefit is better than a later benefit. A certain amount of analysis paralysis can set in when you try to work out whether saving your resources for a later turn is beneficial, or whether you should invest them now, so you get an ongoing benefit. Planning ahead is great, but if you have to plan ahead too many steps, then for me a game becomes frustrating and loses its appeal. I know that many people love very heavy games, and they thrive on having to plan many turns in advance, but these game are just not for me, because I just end up feeling like I am making random choices. So heavy games are fun, but they have to be at the light end of heavy.

I also found that in some games, when I don’t understand what is going on, I just need to choose a strategy and stick to it, making decisions based on it and choosing bonuses that seem to help that strategy. Often that works really well, and I found that in Rising Sun, where the game started to make more sense, as I was trying different strategies and basing my choices on them. It is good when a game offers clear strategies, so that you can make clear choices, and it does help me learn games.

However, I did notice that others tend to grasp some games more quickly than me, and that is fine. As long as I can enjoy the game and feel that I get better every time I play it, even if I only get better marginally. If I feel that I make conscious decisions rather than random choices, then I will continue to play the game, even if I continue to lose every time. It is what is often called agency in games. You need to feel that you have some influence, and that is only possible if you can see how your choices will affect the game.

So how do you feel about strategy or heavy games? How thinky do you like your games? If you have to plan ahead, how far are you happy to go? Do you find you suffer from analysis paralysis and therefore don’t enjoy heavier games? Please share your thoughts in the comments below. It would be great to hear what others think and start a little discussion.