Haunt the House by Kids Table Board Games is not your usual paranormal investigation game, where your role is to explore a haunted mansion and exorcise the evil spirits found within. Instead you take the role of ghosts living happy lives in a comfortable and beautifully spooky house, which is suddenly invaded by pesky humans. So to chase them away you use your full arsenal of scary noises: moans, creaking doors and sudden bumps. Match the right noises to the right person and you score points – but your fellow ghosts try to do the same and they could steal the person and the points from under your nose. So it’s important you make the right noises at the right time. 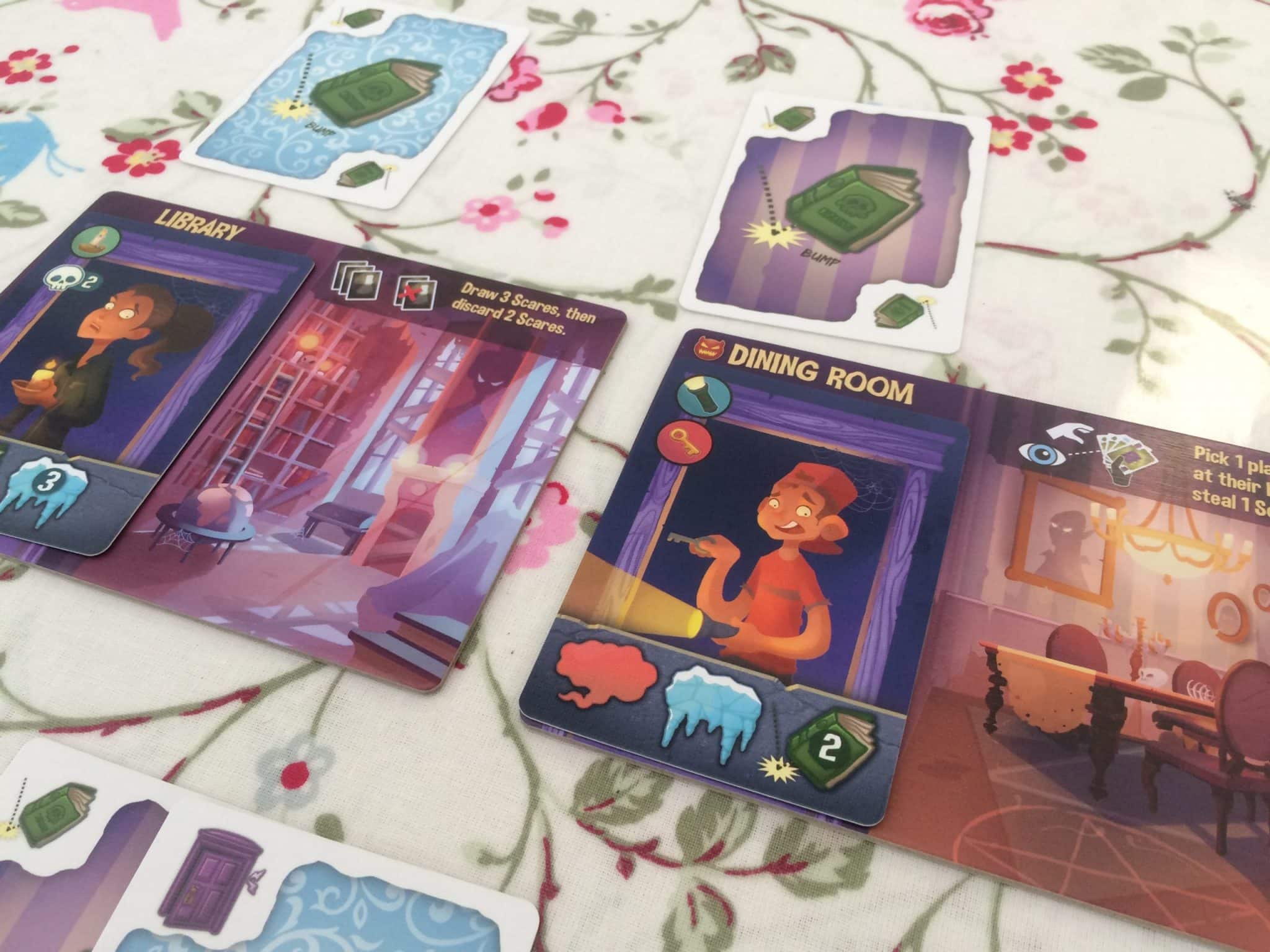 During the game you have a hand of three scare cards, each representing one of the four possible noises. On your turn you can play up to two of your scare cards to one of the four rooms, where one of the many different paranormal investigators is currently found. The thing is, each investigator needs more than just two noises to scare them away, meaning that you won’t be able to succeed with your noises on your first go. In fact, the scares you put down are going to help your fellow ghosts more than they help you, because players can use already played scare noises to chase an investigator away and score points.

So you might play two moans into the same room, where there is an investigator who needs two moans and two creaky doors to be scared away. If the next player has two creaks, they can shout boo and scare the person away. They would use your two moans and their two creaks and score the points shown on the investigator’s card. However, because you helped you also get a point. The game therefore really encourages players to help each other – at least to some degree.

The most points are gained by scaring away investigators. So to make it a bit more tricky, the game allows you to play scare cards face down. The scares you play don’t have to match the noises of the investigators, allowing you to bluff and confuse your fellow ghosts. Nobody will know if there are enough matching scares in the room or not. So when someone shouts boo and reveals the cards you played face down, they may not be able to scare away the person. In effect, they miss their turn, because when you boo, you can’t do anything else.

The downside of playing scares face down is that you can’t take the bonus action offered by the room. Each room does something special, like giving you extra points, or allowing you to draw more cards, but you can only use that action if you play a valid scare face up into that room. Now you have to decide whether you benefit more from the room’s ability, or from confusing the other ghosts.

So even though the game seems very light, you still have to make important decisions on your turn. Yet, you only have limited to choices, so analysis paralysis isn’t an issue in Haunt the House. I think the game creates just the right level of thinking ahead, without making your brain hurt. In fact, it is a lot of fun when you have successfully bluffed and made someone boo a room and make them basically lose their turn – only for you to boo another room and score points.

The illustrations by Josh Cappel and Apolline Etienne are lovely. The cartoon look adds to the fun and makes the whole game really enjoyable to play. The components are also of really good quality. The rooms and tokens are made from thick cardboard and the cards are of good stock. The point tokens are shaped like little skulls, which is a lovely touch. Every player also gets a wooden player token, each one in the shape of a different ghost, which is amazing. The special Kickstarter edition also has glow-in-the-dark paint on some of the components, adding to the ghostly feel of the game.

I have played this game with family before who are otherwise not into games. So even though Haunt the House is not a really light gateway game, it’s also not too difficult to learn, and the extra strategy elements extend the interest of this game. I can really recommend it.