Haspelknecht: The Story of Early Coal Mining, to give it its full title, is a kind of action selection game by Quined Games set in the Ruhr region of Germany. The game is set at a time when the area was still covered by forests and coal was first discovered close to the surface. During the game your task is to dig up that coal until its depleted and you have to start digging deep pits to get to this precious resource. The great mechanism in this game is the action selection element, where you draw all tokens of one colour from one of a number of common pools at the start of each round. These tokens are then used to activate your workforce and develop new technologies. It sounds simple, but it creates a really complex, interesting game with lots of options and very few player interaction. 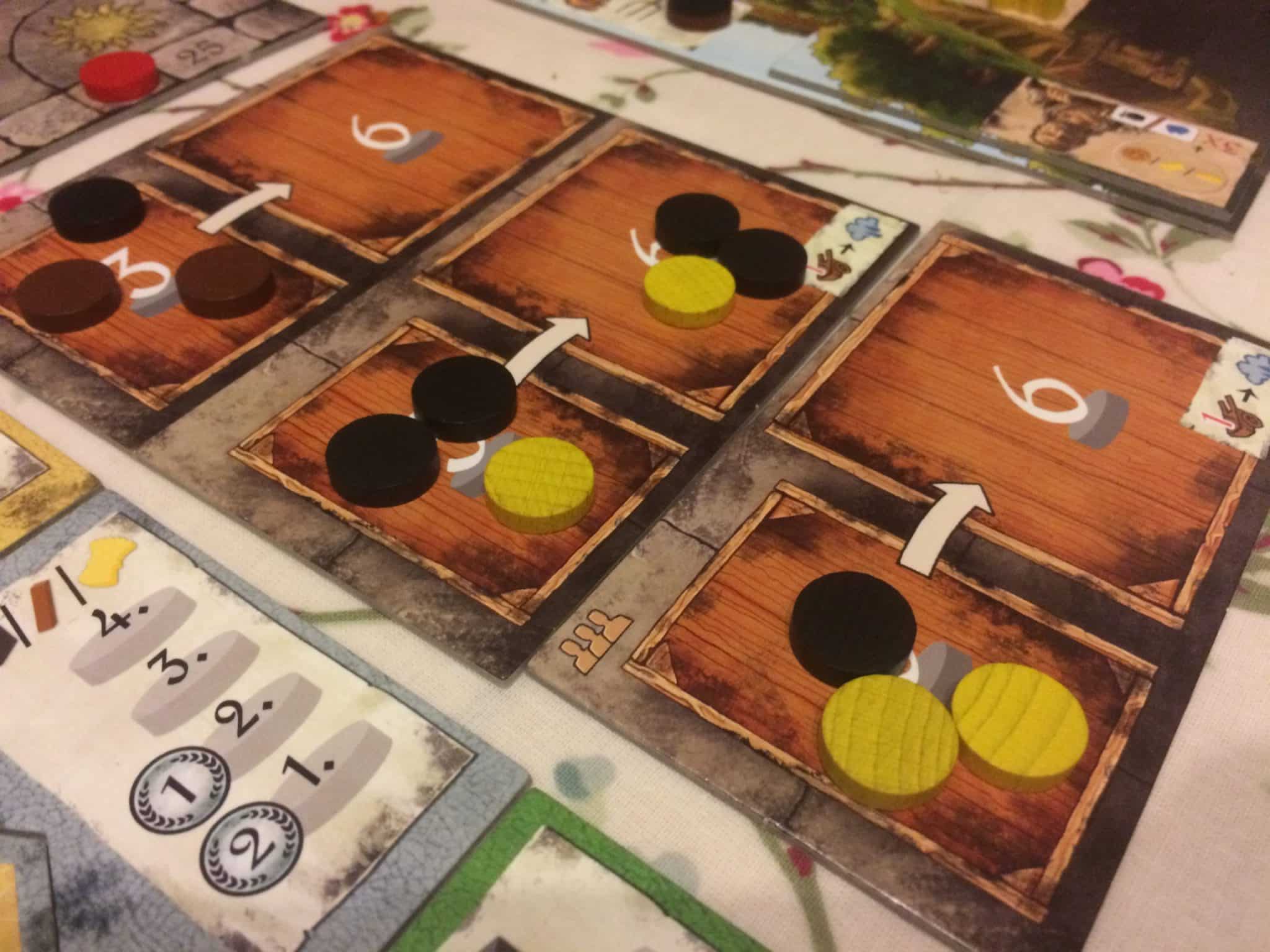 The game is relatively old, but it hasn’t lost any of its shine. It can very easily compete with modern tabletop games of its kind. In fact, it is better than many recent releases, due to its clever action token slection mechanism, which I haven’t seen in any other game so far. So let me explain how this work. Depending on player count, there are one to four common pools of six tokens, random selected from a bag holding tokens of three different colours, representing three different basic types of actions. Yellow for food production, brown to get wood to shore up the mine shaft, and black to dig and haul up coal. So far so simple.

On your turn you choose one of those common pools and one colour present in that pool and then take all tokens of that colour from your chosen token pool. So in theory you would be able to take one to six tokens of one colour, but in reality you are more likely to be able to take two to four tokens, due to the random distribution of tokens across the pools. Also, you can never draw more than five tokens, and every player gets two turns to draw, unless they have already taken five tokens with their first draw. Pools are not refilled until the beginning of the next round of the game.

So player order really matters, because the later your turn comes, the less tokens there are, and probably none of the tokens of the colour you need are left.

So far it’s still quite straightforward, but here comes the twist. Player order changes after everyone has drawn their tokens and is based on your first draw. Different token colours represent different values. Yellow, for food, is worth three points, because it is one of the most valuable resources in the game, because your workers will want food.

Brown, for wood, is worth two points, and black, for coal, is only worth one. So if you draw three yellow tokens in your first draw, your first draw is worth nine points with respect to player order. However, more points mean lower player order. The idea is that the player who got the worst first pick can then go first in subsequent parts of each round, and be the first to draw tokens in the next round.

Suddenly you have to seriously think whether you really do want to take those juicy yellow tokens, or whether you rather take black ones, just to ensure you stay, or become, first player for the rest of the round. However, if you don’t produce any food this round, you won’t be able to feed enough workers to have a really productive round – and you will also not have enough food to pay the lord of the land your duties at the end of the year. It is this that creates this real tension in the game.

The rest of the game is relatively straightforward. You place your coloured tokens on your worker action spaces to activate certain actions the worker can carry out. You are limited to placing only one colour on a worker, meaning you can’t place yellow and brown tokens on the same worker to get food and wood at the same time – and one of your workers only accepts yellow tokens, food or money, limiting your choices a fair bit. In fact, you only have three worker action spaces to start with, which tends to be enough at the beginning of the game, but later on you need to increase your workforce.

The only exception to the rule of placing only tokens of the same colour is when you want to develop a technology. The game has a technology tree mechanism, which allows you to get extra action tokens, end game bonus points, and other benefits, as well as victory points. The tree is randomly set up and you have to work your way along it from bottom to top, branching out as necessary. So you start with basic developments and over time become more sophisticated.

Haspelknecht: The Story of Early Coal Mining is a really interesting game with a lot of replayability. The technology tree is different in every game, and every time you draw tokens, the pools are different, due to the random, blind bag drawing. There are many different strategies you can follow to get victory points. Focussing on mining coal is the obvious one of course and will give you a good amount of points, but you can’t forget to produce food and develop technologies, or you will lose in the long run. In fact, you can mainly focus on the technology tree to get most of your points from, but then you will still need to do some mining and food production as well. It is a great game that will keep you coming back to it again and again.