The woodcutter and I were travelling the lands when we reached a kingdom far to the south. Its people were most distraught, because the fairies of the woods had kidnapped the most famous musician whose music made everything better. Of course, we agreed to help the people without hesitation. We ventured into the forest and peeked under every leaf and fern and beneath the shelf of every mushroom until we finally found the musician, surrounded by angry fairies. Overjoyed, they played an enchanting lullaby that made the fairies go to sleep and allowed us to escape. After reuniting the musician with the people, we were celebrated as heroes and from that moment on were both known as The Fox in the Forest Duet by Foxtrot Games from Renegade Game Studios. 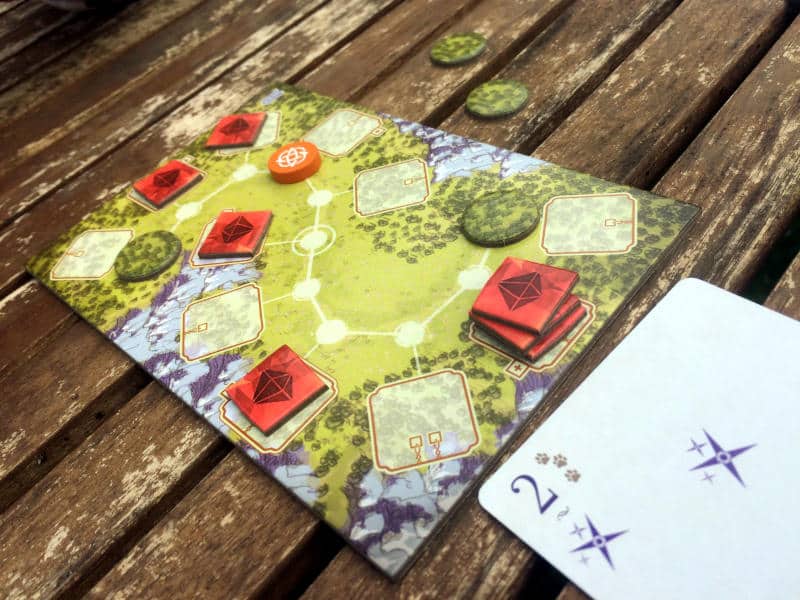 A magical story sets the scene for this 2-player, co-operative trick-taking game with a twist. As you know, I’ve been rediscovering trick-taking games over the last couple of years or so, trying to introduce the people around me to this mechanism that played a huge part in my teenage years and early adulthood. Trick-taking has a very special meaning to me and whenever I can successfully teach it to someone else, I am very, very happy.

My wife learned how trick-taking worked a long while ago, thanks to The Crew, and both of us have enjoyed playing co-operative games together for even longer. So every time a co-operative trick-taking game crosses my path, I just have to try it out. The Fox in the Forest Duet is no different.

The first thing that strikes you, when you look at the game box, is the absolutely gorgeous art. Roanna Peroz has done an outstanding job with the cover image as well as the card illustrations and game board. The illustrations immediately enchant you and draw you deeper into the game.

At first glance, the rulebook seems very long and contains a lot of explanation, but a lot of it is there to explain how trick-taking works. It describes terms such as suit, trump, leading, following and so on. For people who know nothing about trick-taking, this will be invaluable and should allow them to learn how to play the game pretty quickly. For anyone who knows trick-taking well, a large chunk of the rulebook can be skipped.

There are cards with special abilities, but these are printed on the cards themselves and both players get a double-side player aid card that explains them as well and has on its reverse a description of what happens at round end. I just put both cards in the middle of the table, one with one side up, the other with the other, so that both sides were visible at the same time.

So, within 10 minutes you’ll have the game set up and explained to a new player.

Gameplay is also pretty quick. You basically play eleven tricks every round and the game ends after three rounds, unless you win before then. The whole thing is over in 30 to 45 minutes and that’s when you take a little time to think. I’m sure you could finish a game in less than 30 minutes once you’re more familiar with the cards and just keep playing trick after trick.

The challenge in The Fox in the Forest Duet is to collect gems along a track, which represents the path in the magical forest where the musician is kept. Once you have collected all the gems, you win. If you don’t achieve that before the end of the third round, you lose. You also want to avoid leaving the track too often, because otherwise, you will lose too.

There is a token on the track that represents your current position and for every trick, you move that token towards the winner of the trick a certain number of spaces depending on the number of footprint icons present in the trick. That sounds confusing, but the game is really all about ensuring the player wins the trick and can move a useful number of spaces, without falling off the track. Wherever the token lands after a trick has been played, a gem is removed from that location. Getting to the end of the path without going too far is the hardest part. You will find that gems in the center of the path are removed quite easily, while gems at both ends start to pile up.

In a lot of trick-taking games, you just want to win as many tricks as possible, but in The Fox in the Forest Duet, you have to make sure both players win tricks. Not only that, tricks need to be won at the right time by the right player. It’s really quite a puzzle and seasoned trick-taking players will take a while to get their heads around this idea. After all, this is a co-operative game, not a competitive one.

Luckily, the special abilities of some of the cards can help you get to the gems more easily or avoid you leaving the path and getting penalised. These cards can be lifesavers, but aren’t always easy to get played. After all, you have to follow suit. So the best card isn’t necessarily available when you need it.

Speaking of cards with special abilities, there is a tiny niggle I have. All of the cards are symmetrical, front and back. So there is no right way up for them – except the special cards. They have a picture on them and a short description of the card’s ability. So unlike picture cards in standard decks of cards, they have to be a certain way up. If you leave them upside down, then you won’t be able to see them when you fan out your hand of cards. That means the other player will get some information from you as you turn some of your cards around. It doesn’t mean the other player will know everything about your cards, but in trick-taking games, it’s really key that information is kept secret.

It would have been great if the special cards were symmetrical, like picture cards in a set of normal playing cards. The illustration could have been made symmetrical and the text could have been moved to one side to make room for the suit and card value. It’s not the end of the world though and you can still play the game absolutely fine. As I say, it’s a minor niggle for me.

Overall the game is really lovely though: from the beautiful illustrations, the great component quality, the easy rules to the overall puzzle of collecting the gems before time runs out. It’s a game that my wife and I will play many times to come until we finally win. Then we can increase the difficulty further and try again until we beat the game once more. Then there is one more level of difficulty to really challenge us.

The Fox in the Forest Duet is definitely going to stay in the collection and the sort of game I’ll take with us. It comes in a small box and doesn’t take much room on the table. On a dry and calm day, you can easily play it outdoors as well.

So if you’re looking for a 2-player, co-operative trick-taking game that will entertain you for a long time to come, then The Fox in the Forest Duet is definitely for you.