“Bubble, bubble, my lovely potions,” you cackle gleefully as you carefully stir more solvents into the vial that’s slowly being heated over the Bunsen burner. The library you’re working in is full of old, musty smelling books full of alchemic knowledge, carefully annotated and added to by the many generations of scientists who have come before you. You can’t stop now. You’re so close. The light is fading but your candles still provide enough light. Then you hear the familiar voice of your housekeeper: “It’s time to stop now, Rebis” by Gaetano Cavallaro from ThunderGryph Games. 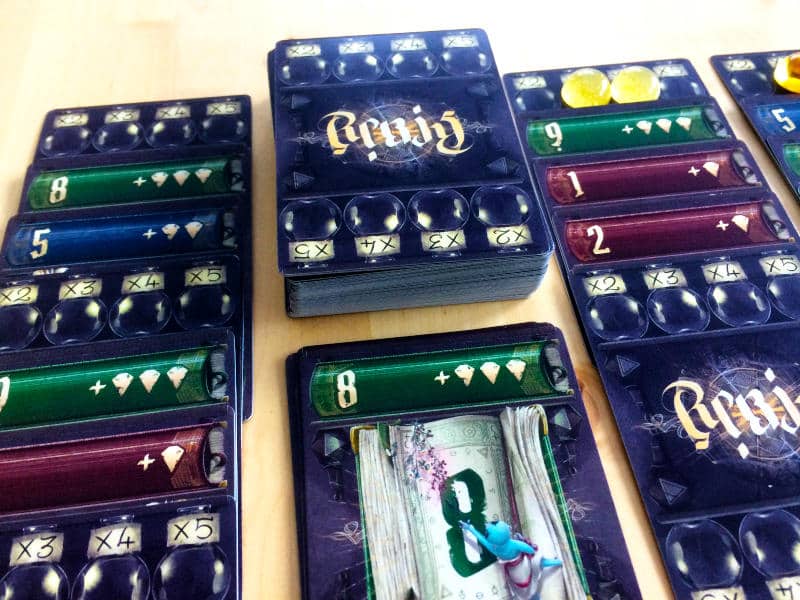 It’s the third game in the Matchbox Collection that I’m reviewing on the blog. Like the others, it comes in the same, small box that is almost full to the brim with a large deck of cards. There is barely enough room for the 13 sparkly and shine mixture tokens made out of resin that form half globes. Even though the box is full, it doesn’t seem like there are enough components to create an interesting game. When you read the rulebook, you realize that there is basically one mechanism that makes this game tick, even though the rules themselves seem rather complicated until you start to play. All of this adds up to the feeling that this game will be underwhelming.

I’ve only played the solo mode of this game, so can’t comment on the multi-player version, but I can assure you, Rebis is a lot cleverer than you may think at first. Gaetano Cavallaro has done a great job to keep everything really quite simple and pared back. Even though the cards are thick and feel quite luxurious and the mixture tokens are sparkly and glitzy, everything else is brought back to basics. The game comes alive through the player’s actions, the decisions you make on your turn, what cards you play when and in what order.

At the heart, Rebis is almost like a set collection game. The cards you play represent gem values, which are basically the victory points at the end of the game, as well as numeric values. Higher numeric values go along with more gems and therefore more victory points, but as soon as the numeric values of the cards played add to 13 or above, you automatically complete that set and the card you play is placed facedown, thereby not giving you any gem victory points.

It’s a bit like playing Blackjack. You try and get as close to 13 as possible, having as many gems in your set as possible, without going over. After you complete a set, you start a new one, meaning you start another round of Blackjack, trying to get to 13. So, ultimately, you try and play cards with low numeric values, so you can play more of them and therefore also get more gem points.

The problem in the solo mode of the game is that on your turn, you always have to play one of your cards into the AI’s current set. At first glance, you basically just want to try and get the AI to go above 13 as quickly as possible, so they get fewer gem victory points, but it’s not that easy. The reason is that the AI starts with mixture tokens in their set and these occupy multiplier spaces, meaning that the points in the set will either be doubled, tripled, quadrupled or even multiplied by 5. That means, they will easily win, unless you somehow remove those mixture tokens.

The only way for you to do that is by completing one of your sets. So now you need to go above 13 as quickly as possible, so you can remove a mixture token from the AI, thereby reducing the multiplication of their points. However, the quicker you finish your sets, the fewer gem victory points you end up having and you don’t get the benefit of multiplication.

It ends up being a balance of finishing your sets while leaving the AI’s current set open for as long as possible, so you can keep removing more mixture tokens, while also making sure you get enough gem victory points in your sets. It’s a fun little puzzle that takes a couple of rounds to master.

It gets even trickier, because you start every turn with a hand of four cards, drawn from the large deck of so-called library cards. The cards are divided into three groups: red, blue and green cards. Red cards have numeric values ranging from one to three and only one gem point, while blue cards are valued between four and six and will give you two gem victory points at the end and the green cards are numbered seven to nine and give three victory points. You play one card to the AI’s set, then one or two to your own and finally discard a card, before drawing up to four cards again.

That’s simple enough, but the next time you play a card to the AI, you need to play one of a specific colour, depending on the colour of the card you discarded on your previous turn. If you discarded a low gem value red card, you now have to play a high gem value green card. If you discarded a blue card, you have to play a blue card onto the AI. So ideally, you want to discard green cards, because on your next turn, you will give the AI a red card, which only has a single gem on it. The problem is, of course, discarding a green card also means you won’t get the three gems that those cards are worth as victory points at the end of the game.

The game makes it even a bit harder, because if you are unable to play the specific colour needed, you have to give the AI the top card from the discard pile. So your best-laid plan of discarding a green card so that you only need to give the AI a single gem red card on your next turn could be foiled if you simply didn’t draw any red cards. Suddenly, blue cards seem like the better option.

The game ends when the AI has completed four sets, i.e. when you have played numeric value cards that add up to more than 13 four times. You still finish your turn, playing cards to your own set and then count up the gem points, considering the multipliers for the AI, and whoever has more, you or the AI, wins the game.

It’s really quite simple, yet that simplicity makes for a really elegant game that is addictive and the sort of game that you will enjoy playing solo. It does remind me of Patience in some ways in that respect.

The only niggle I have is with the rulebook. Of course, it’s a small leaflet that fits in the box. That’s fine and I quite like that actually. Unfortunately, the rules seem a bit complicated, even though it will all make sense very quickly when you start to play. What’s worse though is that one of the illustrations in the solo rules is so tiny, that you really can’t tell what it is the game wants you to do during setup and the text doesn’t describe it either. However, find the online version of the rules on the ThunderGryph website and zoom in and it will make sense. It’s just something to bear in mind and basically, the rules tell you to put the mixture tokens on the AI’s cards, leaving the 2x space empty on all of them. The first AI set will have three shiny mixture tokens, one on the 3x space, one on the 4x space and one on the 5x space, while the other three AI sets will have one golden mixture token on the 3x space, then one shiny mixture token on the 4x space and one shiny on the 5x space.

So, if you fancy a quick little game that takes less than 15 minutes to play, then Rebis is really beautiful and fun and very soon you will have beaten the AI and will try to beat your own high score.