We were going to fight it out head to head or rather golem to golem. Using our magic control grids, we would steer them around the arena and inflict damage on each other until one was mortally wounded. It was going to be a quick fight, but the battle would take longer. We would fight over many rounds to decide the victor in this Earthenwar by Lazy Poet Games. 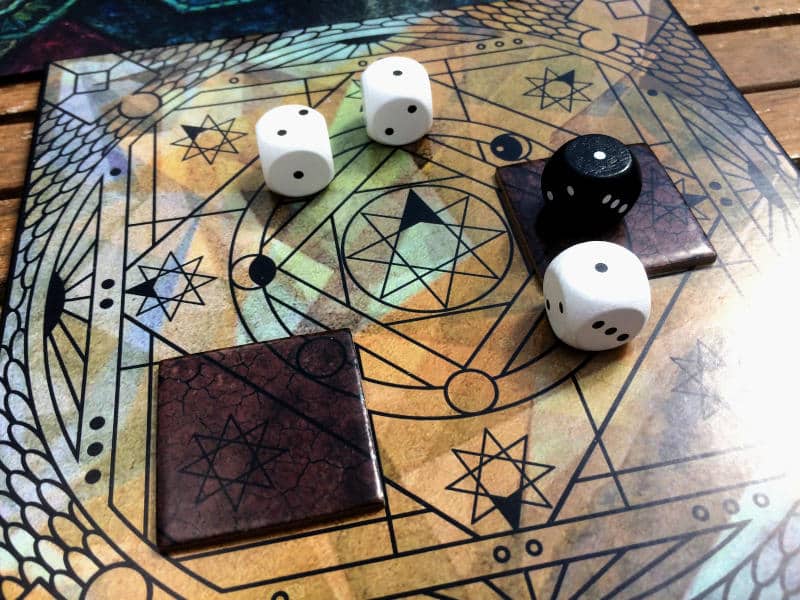 I’m sorry to start this review with a cliché, but for once, it is apt to compare a game with chess. I know, many have tried to make the next version of this ancient game and promised to make it even better, but many of them have failed miserably. Now, to be fair, Lazy Poet Games have NOT promised to deliver a chess-killer. They call Earthenwar “a two-player combat game, set during World War One.”

I don’t know where World War I comes into this, but I think they have delivered what plenty of others have failed to do. Earthenwar maybe isn’t a chess-killer as such, but it’s the perfect game for anyone who either is an avid chess player and wants to try something a bit different or who has never played chess before but likes the game in principle.

Earthenwar delivers a very similar feeling to that of the end game in chess, where only the two kings are left. Actually, that’s the wrong comparison, because if only the two kings are left, then a chess game is considered a draw. It’s more like a game of chess without any kings at all, but only two queens left – which isn’t a chess game at all of course. Anyway, it’s very hard to explain, but for me, Earthenwar certainly scratched the chess itch.

At the same time, if you have never played chess before or if you feel that it’s too much to remember what all the different pieces do, but you do like the strategic element, then Earthenwar is perfect for you. The game is really easy to teach and learn and it also only plays in around 15 to 30 minutes. It’s very quick, which chess isn’t, of course, except maybe speed chess – but I digress.

The ease of learning and the small amount of time it takes to play a game makes it perfect to play it several times in a row. In fact, I would recommend that, once you have learned the game and played it a couple of times, you decide at the beginning to play Earthenwar as a best out of a certain number of games, say best out of five. That might sound weird, but it makes sense, because the game doesn’t become boring. Quite the contrary. The more you play it, the more addictive it becomes, because you’re starting to develop new strategies and start to get a feel for how to best manoeuvre your golem to attack your opponent’s.

Actually, I just realized that I’ve not really spoken about how Earthenwar works. The game is a dice placement game, in a way. During the game, you will be able to take additional dice, each of which you roll before you place them, and you can choose between white movement dice and black attack dice. The pip values on the six-sided dice actually only go up to three, making them, in effect, three-sided dice. The higher the pip value, the further you can move your golem or the further your attack will reach.

You place newly collected dice on one of the eight compass directions on your so-called “magic control grid” and depending on where a dice is placed, you can move or attack in that direction. Your golem always faces north, i.e. straight ahead, at least from where you’re sitting. So if you place a white movement dice in the top-left position of your control grid, your golem will be able to move a certain number of spaces, as indicated by the pips on the dice, in a north-westerly direction. Just remember, your golem doesn’t turn as it moves. It continues to face north, even after moving north-west.

However, before you do your moving and attacking, you can move a single dice or swap the position of two adjacent dice, so that you are able to move or attack in a different direction than the dice would otherwise have allowed you. The problem is, that process is slow, so if you need your golem to change course quickly, you’re better off adding a new dice to your grid instead.

That sounds great, but the next problem is that the eight compass positions on your control grid are limited to one dice only. So you can’t move and attack in the same direction. It makes your golem feel like a big, heavy lump, akin to a giant battleship, because if you want to fight your opponent and inflict damage on them, you might have to take two movement actions in different directions and then launch your attack in a third direction. So it’s one step forward, one to the left, then attack three spaces to the right.

That’s what will do your head in a little and is something you need to get used to. It’s so easy to think that, when the other player’s golem is straight ahead of you, that you simply move a step or two towards them and then attack them. Of course, you can’t, because if the dice in the north position of your grid is white, you can only move in that direction. Having black attack dice in the northwest or northeast positions is no good when your opponent is straight ahead.

It won’t take long though and you will quickly see what you need to do to get your golem in the perfect spot for an attack and still have dice left to retreat to a safe place – and that’s where it gets tricky. You don’t want to end your turn in a spot that your opponent will be able to attack themselves. So you have to see what they can do and try and get away somewhere safe. Sometimes it’s best to stay close to the other golem, sometimes it’s best to have enough movement available to get as far away as possible.

The whole process of movement and attack is what makes Earthenwar so interesting and addictive. The battle takes place in an arena, divided into squares, very much like a chess board. So you have to be careful that you don’t work yourself into a corner with no way out and as mentioned above, if you don’t have the right dice, it will be hard to reverse your movement on a future turn and you end up going headlong in the same direction turn after turn until you hit a wall.

The game continues with players taking turns until one golem is damaged in three places that are next to each other. Depending on relative positions, one golem will damage the other in a specific spot. So if both golems are facing each other, the damage will be at the front of the golem, for example, or if they’re side-by-side, the damage will be on one side. The damage is recorded on your control grid, so there are technically nine spaces for damage.

The eight spaces along the edge are damaged as just explained, but to damage the central spot, you need to attack an already damaged location, at which point you will roll one black and one white dice to decide where your attack will actually hit. If you roll two twos, then you successfully damage the central slot on the opponent’s golem and once you have damaged a whole row or column or the diagonal of the other player, then the game ends and you win.

It sounds a lot more complicated than it actually is. As you start to play, everything makes perfect sense and after two or three games, it all feels very natural and you start to develop your strategies. I even think that Earthenwar will be the sort of game with certain openings, just like chess, of where to place your dice at the beginning and which dice to choose. I reckon players will be able to analyze different approaches and their chances of succeeding.

At the same time, there is a good amount of luck in Earthenwar as well. New dice added to your control grid are not guaranteed to be the pip value you want them to be. You can up or downgrade a dice on your turn, but if you get very lucky dice rolls, you are able to defeat your opponent very quickly. That might not be what some people want from this game, but as I always say, luck in a game does even out the playing field allowing players of different experience levels to compete and both having a good chance of winning. So I do like the luck element in Earthenwar and it’s at just the right level to not be overwhelming.

So, if you want a two-player strategy game that appeals to anyone who likes chess, then Earthenwar is definitely for you.