Someone had hidden the Emperor’s dogs. It was an outrage. The Emperor suspected their cabinet ministers who strenuously, but politely, denied the accusations and pointed their fingers at their counterparts. They eagerly offered to help the Emperor find their dogs, but they clearly had something to hide. When the Emperor was convinced that they could hear a dog behind one of the closed doors leading to one of the ministers’ private chamber, that minister would quickly lead the Emperor away to another minister’s door. The Emperor got dizzy, but eventually, one of the dogs was found in the room of minister Dokojong by Oink Games. 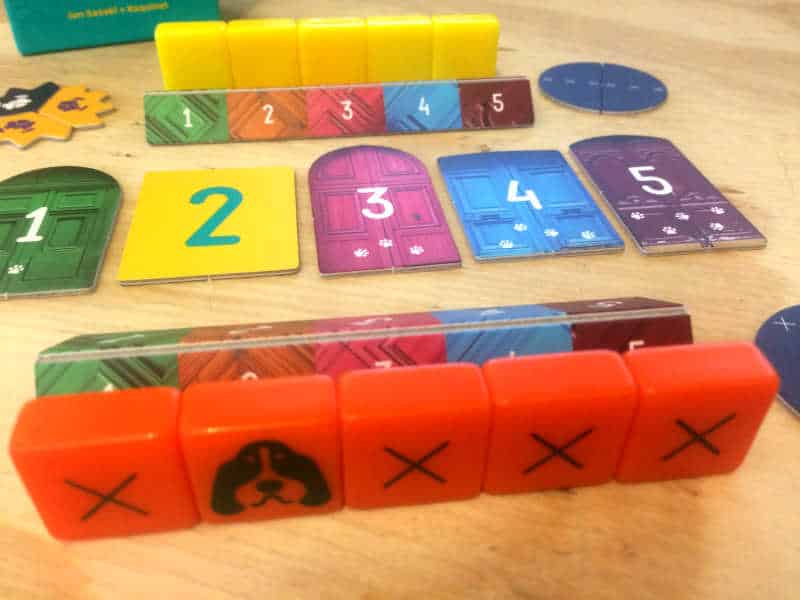 Yes, I’m reviewing yet another game by Oink Games, but that’s no surprise. All of their games can be learned and played very quickly. They come in wonderfully small and vibrantly colourful boxes, so are perfect to have with you or place strategically around your house to encourage others to play them with you. Dokojong is no different.

The game is all about misdirection, bluffing, double-bluffing and generally trying to persuade the other players that their guess of where you have hidden one of the Emperor’s dogs is wrong – and not only that, but that in fact, a third player has actually hidden it somewhere completely different. Or maybe you’re double-bluffing and want the other players to think that.

It’s the sort of game that you start playing like a lot of hidden information games. You will randomly choose one of the five doors that the dog might be behind and then see what the next player does. If your guess was correct, chances are that they will deny it and point at a different door instead. So, over time, one of you will have gathered enough information to know for certain where the dog is and then use their turn to open that door – and yes, they will be right. The game starts out as being very much about eliminating options one by one, until there are only one or two left – at which point, you can take a confident, almost educated, guess.

Of course, over time, players will realise that they need to start bluffing. That’s when the metagame begins. It’ll probably take two or three games before it’s clear that always directing players to another door isn’t the right choice. Sometimes it’s better to accept the choice, even if that’s where you have hidden the dog. That’s the first level of bluffing – but it won’t take long until you need to double-bluff.

The thing is though, that Dokojong is really a lot more about probabilities. Players have the option to directly accuse the lead player and point at a specific door. If the dog is behind that door, the lead player gets one strike – and after three strikes, they’re out. Each accusation is a 1-in-5 chance, because there are five doors behind which the dog could be. So chances are, that your guess will be wrong.

Yet, making a wrong guess isn’t actually so bad. All you have to do, is reveal one of your five doors that doesn’t have the dog behind it – and if you survive a round with three revealed doors, you get a point – and once you gain two points, the game ends.

So, in reality, you get three guesses. Get all three wrong, you get a point. If you guess correctly with one of the three guesses, the leader gets a strike. Overall, the odds of simply guessing give you an almost 50:50 chance of winning the game. The odds are slightly against you, but not by a lot.

Unfortunately, those odds break the game for me. It’s really a lot easier to just guess, because chances are that you will win. There doesn’t seem to be any mechanism in the game to encourage players to not randomly guess, even though Dokojong really seems to be designed around the concept of people pointing at doors, slowly revealing more information, until they have limited the options enough to make a confident guess. That’s how the game should be played and that’s how I really enjoyed playing it.

As soon as you realise that you might as well just accuse the lead player directly, because your odds are probably just as good as when you try to slowly reveal the truth, the game stops being fun. I seriously hope I misunderstood the rules or missed something somewhere, because Dokojong could be the type of game that is great at parties and a great ice breaker. It’s sad and I feel really bad, but as it stands, I can’t recommend it to anyone and until someone tells me where I went wrong, the game will be put away.