The crowds were gathering outside, asking difficult questions, asking to be let in, not sure if we still had any control over them – but we fobbed them off with excuses, sent them to a different office and generally put up a smokescreen. We hadn’t finished our final project yet. There was so much left to do, so much evidence to destroy or get out of the back door. We didn’t know how much time we might have left, when we finally heard the chanting outside: “Stasi raus, es ist aus!” by DDR Museum. 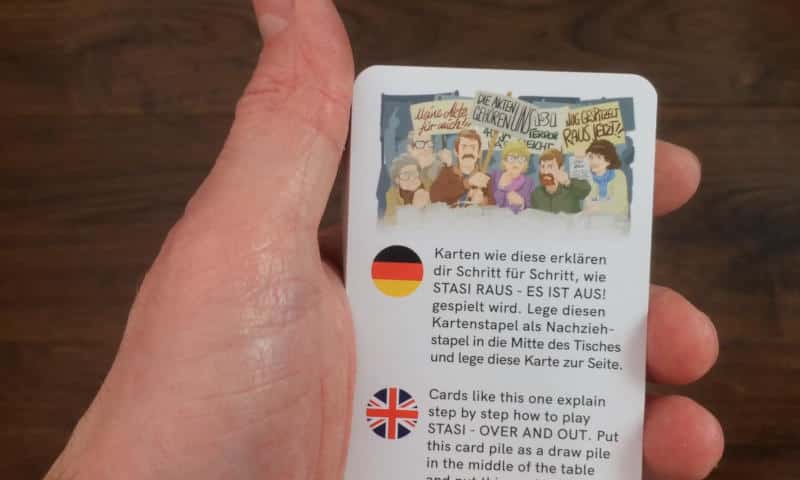 As a German growing up in the West, I knew about at least some of the terrible things that the Stasi, the Staatssicherheitsdienst, was doing in the East. As the secret service of the German Democratic Republic, they didn’t spy on foreign agents or foreign countries – they spied on their own people in their own country. They encouraged people to report each other, turning children against their parents, siblings against siblings, friends against friends and neighbours against neighbours. Nobody knew who they could trust or who might report them for watching West German television or listening to Western radio.

People disappeared, either for a few weeks or sometimes forever. As it turned out later, these people were tortured and made to reveal other dissidents or sign confessions for things they never did. The Stasi was creating an atmosphere of fear among the population.

They collected large archives of files on a huge number of East German people, containing names, addresses, phone numbers, photos, telephone recordings and many other pieces of information that the government appartus was collecting on everyone. These files were supposed to provide the proof that someone was committing treason.

The problem was, when the German Democratic Republic eventually reached its end, the same files were also proof of the terrible actions that the Stasi was responsible for, with names of agents and staff, allowing the new government to prosecute the perpetrators of the regime of terror that the Stasi had imposed.

So the order was given to destroy all of the files – shred them, burn them and do whatever it takes to eradicate all traces of what the Stasi had done – and that is where the game Staus Raus, Es Ist Aus! begins. The thing is, you’re not a citizen trying to storm one of the service’s offices and retrieve those files, but you’re a member of Stasi staff whose aim is to destroy as many files as possible, while buying some extra time by giving out misinformation to the people waiting outside the doors, until eventually the crowd becomes too big and the game ends.

Some of the cards represent people who are gathering outside your office building. Having a few waiting is fine, but when the number of people waiting outside everyone’s offices reaches a certain number, the game ends immediately, representing the storming of these office buildings that happened in real life. You can take a turn to send someone away, but they are just added back to the draw pile, meaning they will eventually come back again.

The thing is, what you do is tricky. On your turn, you draw three cards from the draw deck, putting them face-up in front of you for everyone to see (which is unusual for such a secretive organisation). Then you can take up to two actions: shred a document to give you victory points, i.e. put one card onto your “shredded” deck, take a person card from in front of you and put it at the bottom of the draw deck, hopefully for someone else to draw in the future, or use a card’s action ability, but losing the card’s victory points.

At the beginning of the game, shredding files is your main job, but as more people cards are drawn, you need to start getting rid of them, so that the game doesn’t end. Also, you’ll have started to get some really helpful document cards, which give you useful one-off actions or abilities, but they’re also worth a lot of points. So you have to think whether you shred them to get into the lead or use them to slow someone else down.

The pace really ramps up as the game progresses and you can imagine how the people started putting more and more pressure on the Stasi. They had to decide between sending people away, shredding documents and doing over their colleagues.

It is also very interesting to be put into the position of a member of staff of the Stasi. You don’t know if you should root for the people or for the Stasi to destroy all the documents. As you play, you do relive the history that unfolded at the end of the 1980s.

The game helps with this, because every card refers to an actual file or piece of information that wasn’t destroyed and recovered later on. The cards also tell you about a number of events that happened, and the game is sent out with the cards in a specific order that follows the actual timeline, so you can learn a lot about that part of East Germany’s history from playing the game.

Stasi Raus, Es Ist Aus! also teaches you the game as you play it. Again, the deck is stacked in such a way as to introduce new things as you go along. Once you’ve played it, you can either stack it back in the same order, so you can teach it to others, and the cards are numbered so it’s really easy to reset the game, or you can just shuffle everything up and play it that way, which gives you endless replayability without losing the historic context and educational content.

The whole game was carefully put together and was intended to teach you about those events before Germany became one again. It’s well researched and really well made. I know, I’m probably biased, but I highly recommend you buy the game and learn about what the Stasi did. It could be a very timely lesson from history.