“Bubble, bubble,” the herb witch cackles. “Stir the pot – nice and slow,” the miracle doctor says. “Slowly, add another ingredient… what will it be?” the quack surgeon asks, looking at you intently. You reach into the bag, with anticipation, not quite sure what ingredient your hand will retrieve. “Come now, come now,” the witch emplores. “Put it in the pot, don’t hesitate,” the miracle doctor tells you, rushing you along. You can’t look. You quickly withdraw your hand and throw the ingredient in the pot and as you do so, you open your eyes a tiny bit and see a flash of white. A cherry bomb lands in the pot with a splash and a fraction of a second later it explodes. However, it’s not too late to seek help from The Herb Witches by Schmidt Spiele. 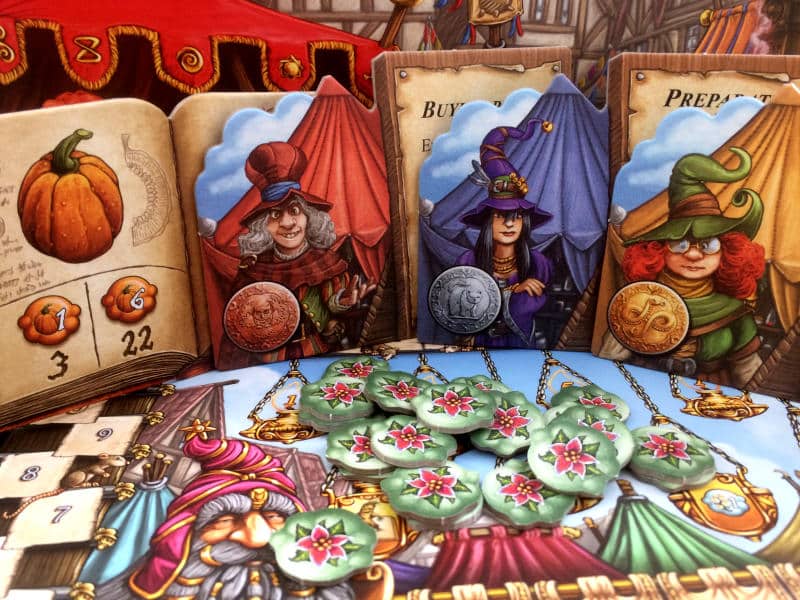 Here is an expansion to the very popular The Quacks of Quedlinburg, which I reviewed not too long again. It adds a new ingredient, the Locoweed, new ingredient books, two of which replace the original Pumpkin and Hawkmoth‘s books, along with a six-value Pumpkin, a fifth player colour, so you can now play with up to four friends, and, of course, the Herb Witches themselves, which give you extra, one-off actions.

There are also extra tokens and the overflow bowls, which give you extra points if you ever get all the way around your pot. So if you have played the base game a lot, then you might want to give this expansion a go. It will certainly give you some more variety.

However, for me, there are two things from this expansion that I think are worth the purchase alone – and worth buying even if you haven’t played the base game to death yet. In fact, it feels like they should have been part of the base game, because they complete The Quacks of Quedlinburg for me.

First of all, The Herb Witches introduce a nice element that allows you a bit more control of the randomness. There are three basic types of witches, gold, silver and copper, and each type comes in a number of varieties, very much like the ingredient books change the function of the ingredients.

At the start of the game, you’re given three coins – one gold, one silver and one copper – and during the game, at certain stages, you can spend the coins to get the help of a specific witch, but only once. The coins aren’t replenished during the game and if you don’t need to use them, are worth points at the end of the game.

Not only do they create more variety, but they also allow you to reduce the effect of misfortunes. If used cleverly, they can even help you win. At first, I kept forgetting to spend my coins when it would have been really beneficial, but it didn’t take long to settle in. So it does take a game or two to get used to them.

You’re supposed to choose one of each type of witch randomly, but of course you can houserule that and select those that you like best – and you can even leave them out altogether, if you wish, but I think that would be a real shame.

The other thing that comes in this expansion are the ingredient books five and six. They introduce the new ingredient, Locoweed, which is nice, but in my view isn’t really that interesting. What’s more important to me are the way they change the ingredients from the base game.

Especially set number six is my favourite. Suddenly the green Garden Spiders are much more valuable and useful. There is now also a wonderful interplay between the Crow Skulls and Mandrakes, whereby the former gives you rubies, while the latter needs rubies. It’s great when it works. The Ghost’s Breath has also become much more interesting and the Toadstools get a clever twist.

There is also now an ingredient book that replaces the original Pumpkins and adds a six-value pumpkin, which is very expensive, but can be a deciding factor in the end game. If you can buy two of those over the rounds and be lucky enough to draw them out every time, your victory is almost guaranteed.

To me, these two things alone are definitely worth the purchase of the expansion, and if you’ve played the base game so much, that you can almost play it in your sleep, then The Herb Witches is definitely for you.