Everything felt new and awkward. You had practiced for this as much as you could. Yet, you didn’t feel confident. “You can do it,” Dawna whispered into your ear piece, as if she knew what you were thinking. “Let’s get ’em,” came the roar from Farg over the comms, bringing you right back down to earth and giving you the extra nudge you needed to do this. With these two Mo’kons by your side, you stood a good chance. You might not win this time, but you would learn and grow in experience. You would become stronger. It was time for you to step into the Prisma Arena by Hub Games. 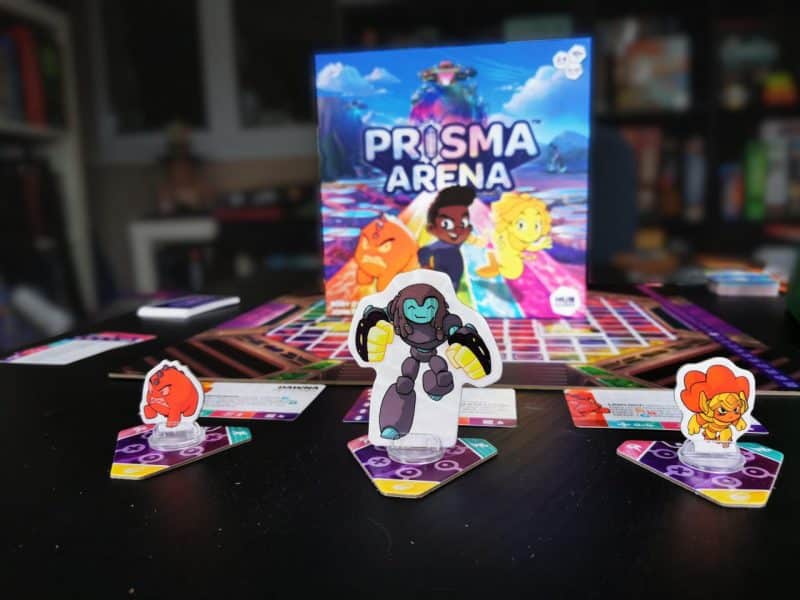 Let me start by saying that I only played the game once with Rory O’Connor of Hub Games on Tabletop Simulator. So even though I can’t tell you much about replayability or the quality of the components, with that single game and all the other information that Rory shared with me, I feel I have seen enough to write this review.

What is immediately clear when you look at Prisma Arena‘s illustrations, is that it’s clearly aimed at the whole family. There are lots of bright colours everywhere and the box cover shows cartoon characters seemingly riding a rainbow. It’s the sort of thing that would appeal to the younger generation.

However, the characters aren’t your usual super heroes or rangers with powers, and there are no unicorns in sight. Prisma Arena tries to avoid stereotypes wherever it can, allowing anyone to see themselves in one of the four hero standees that come with the game. In fact, the standees are relatively generic and it is the large amount of different stickers that you will find in the box, which allow you to customize your hero in whatever way you please.You can even be a robot, if you would rather not play a human character.

Yet again, Hub Games lives up to its name of making their games as inclusive as possible and open to as wide an audience as possible.

Unfortunately, the choice of illustrations can be off-putting for so-called “serious” gamers – whatever that means. I can safely say, that’s their loss though. Prisma Arena offers an arsenal of combo cards that allow you to carry out massive chains of actions, transforming a simple turn into an aweinspiring sequence of attacks.

I’m getting ahead of myself here though. So let me start by describing what Prisma Arena actually is. It is billed as “a fast-paced game of over-the-top arena combat.” That’s certainly true, but at the same time everything is a lot simpler when compared to tabletop skirmish games.

There is the octagonal arena, which is divided into square spaces that define your movement and attack range, as well as line of sight. Very simple. There are obstacles that you take turns to place at the beginning of each battle, as you will know from a game like Catacombs & Castles. Also simple. There are no dice to roll. Super simple.

However, like in other battle games, everything is still very much about tactics that will hopefully help you complete your overall strategy. Randomness comes from your shuffled deck of combo cards, which allow you to chain extra actions to your basic choice of move, blast and strike. So you can actually plan much better and aren’t at the mercy of an unlucky dice roll.

What’s nice here though, is that any combo cards you play are then put onto your opponent’s discard pile. That means that even when you have a really strong starting hand, it won’t be long until your opponent will be able to take advantage of those amazing combo cards. It reminds me very much of Karmaka in that respect. Nobody can complain, because one person’s fortune may well be their downfall later in the game.

Everything else is very much like you would expect in other skirmish games. You move your characters into position, trying to take cover or going out into the open as is necessary for the situation. You make your attacks, weakening your opponent’s characters and play your combo cards in the hope to finish them off.

The excitement and nervousness of never being sure if your character is safe and in a strong position – or not – comes across really well. You keep counting the squares and check if you’re in anyone’s line of sight, while checking your combo cards to see if you can deal the killing blow on your next turn, and trying to remember cards you had previously played, wondering if your opponent might be holding them in their hand right now.

I keep talking about killing, but in Prisma Arena, nobody dies. All that happens is that a character is knocked off the board back to their starting platform, where everyone starts at the very beginning. On their next turn, that character can then easily be reactivated and rejoin the arena.

However, to avoid constant respawning and force you to plan your turns and actions a bit further ahead, every player takes turns, activating a single character, after which they are exhausted for the rest of the round. Only when all characters are exhausted are they all refresh again.

Rory taught me the game during a live stream, after which we played it, and it really impressed me how simple the rules were and how easy the game was to learn. After only around four or five turns, I had done virtually all the actions possible. Yet, the complexity and depth of Prisma Arena are high, because it emerges from the players’ choices. Just like in a game of checkers, which has very simple rules, the game state can very quickly become very thinky. Add to that the variety of movements found in chess and the need to think a couple of turns ahead, you get a really fun game that will keep players of varying levels of board game experience happy.

There is one more thing though, which sets Prisma Arena apart. After every game, you can tick off certain achievements on your character card, which will eventually allow you to level up, which represents the experience you have gained during the game.

However, don’t fret. Even though the game is technically a legacy game, what with the stickers and ticking off boxes on character cards, you aren’t locked to playing it with the same people every time. You can freely take your character card over to someone else who also has a copy of the game – or you can use guest cards to allow anyone to join in the fun, even if they don’t have the game themselves.

There is a handicap system that ensures players on different levels have an equal chance in the game. You can also decide to just all play on the same level, effectively downgrading more advanced characters. It really opens up your options and means you can easily play Prisma Arena with family, friends and different games groups.

As I said at the beginning, I can’t comment on component quality, but if you look on Hub Games’ website you can see what comes in the box. I can only imagine how much fun it would be to move your standees around the arena as you shuffle your characters into advantageous positions or diving for cover.