The dive team was getting ready to leave the submarine. The oxygen tank was full, but it was limited. Everyone’s lines were connected to it, so everyone had to be frugal and be aware that the air was shared among the team. It was going to be risky, but nobody was under any illusions. After a few last checks, it was time to leave the vessel and hunt for treasure – and make it back alive. It was going to be a Deep Sea Adventure by Oink Games. 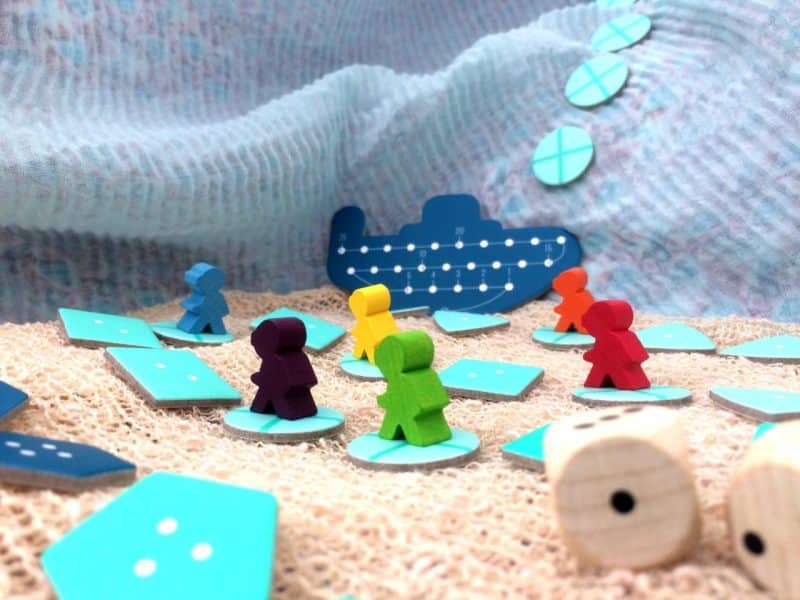 If you hate dice rolling, then stop reading now. Deep Sea Adventure won’t be for you. If you don’t like push-your-luck, then stop reading too. These are the main two mechanisms in the game and are what make it so much fun. If you’re still reading this, then I know that you’re going to love this game, because there is a lot more to it than just those two mechanisms of course.

Sure, at first glance Deep Sea Adventure looks like a roll-and-move game, and to some degree it is. It’s also definitely a push-your-luck game, but you’re not actually just pushing your own luck, but everyone else’s as well. The thing is, everyone shares the main resource in this game: oxygen. If someone runs down the oxygen, then they die – and you die – and everyone else dies. Unless, of course, they have made it back on board the submarine in time.

At first, all goes well. Everyone happily rolls their dice and moves along the track of treasures. That requires no oxygen, because nobody has picked up any treasure. After all, the valuable treasure is at the end of the long trail and everyone is keen to keep going and get to it first.

In theory, everyone could get to the precious treasures and come back rich. If everyone worked together, there would definitely be enough oxygen to get to the end – provided nobody picks anything up along the way.

However, the temptation is just too great. You will ask yourself whether you really need to have one big treasure, or whether it wouldn’t be better to pick up a couple of smaller ones. You wouldn’t have to be too far away from the submarine to pick them up. It would be safer and you could be confident to make it back to safety in time. So, of course, you pick up your first treasure. It’s not much, but it’s better than nothing.

The problem is, on your next turn you will start to deplete the oxygen – one notch on the gauge for every treasure you have. That’s not too much of a worry for you, because you’re still close to the submarine. The bigger problem for you is, that your dice rolls get one pip deducted for every treasure you have. Suddenly you’re a bit slower than you were, but you think you can still make it.

Suddenly, all the other divers start to panic. You’re in the lead with your single, if small, treasure. You’re also running down the oxygen, so the timer has started to tick. In quick succession, divers green and yellow also pick up treasures. Green had made it a bit further than the others, so their treasure is a bit more valuable than your’s or yellow’s. Purple is holding their nerve and decides to push forward and get an even more valuable treasure than green’s.

It’s back to you. You’re using up oxygen, so you’re determined to get to the submarine. Your single treasure may not be enough, but you just want to get to safety. So you turn around and head back. The problem is, you didn’t expect yellow to turn up the pressure. They also decide to turn back, but they’re picking up more treasures as they go, using up more and more oxygen on their turns and travelling more and more slowly.

Green panics and drops their treasure, to ensure they’re not using up any oxygen and so that they can travel faster than the rest of us. It doesn’t take long for them to overtake you and yellow.

Purple, in the meantime, has picked up a really valuable treasure. They’re pleased with themselves, but they also know that they’re far away from safety. It will take them a while to get back to the submarine, but if they make it, they’re likely to win this round – or at least come second.

Green finally makes it to the submarine, shortly followed by you. Yellow is stubbornly hanging onto three treasures, slowing them down to a crawl. In fact, they’re at a standstill most of the time. Purple is catching up, but unfortunately, neither of them make it. Yellow’s greed depletes the oxygen before either of them can make it back on board. Their treasures are lost – and they both die. Luckily, there are two more crew waiting to take their places, as everyone gets ready for another round.

As my little game report has hopefully conveyed, there is a real sense of peril as you play Deep Sea Adventure. You’re never quite sure if the rest of the dive crew will pick up treasure to deplete the oxygen, or if you can trust them and are able to get to the most valuable treasure. So even though the dice rolling creates a lot of luck, you also have a lot of control over it. Yet, the most control is held by the other players. They literally can change your fortune by their actions.

Oink Games have made a really great game. It comes in a wonderfully small box, with custom diver meeples and wonderful cardboard chits, as well as a cardboard submarine oxygen counter. Have a look at my unboxing video to see for yourself, but it’s a game that you can take with you easily and play with very little table space. It also plays really quickly, so is ideal as a filler game as well. I’d recommend you take a closer look at it, but I think it’s really a no brainer and a game you should add to your collection.