You and a handful of brave explorers have finally found the entrance to Mount Arima, the fearsome volcano that has laid sleeping for decades, and which hides an important secret in its maze of tunnels. Tales of a magical sanctum have drawn you and your fellow adventurers together. You all promise to work together and face whatever dangers you may encounter in the depths of this mountain. Yet, none of you have realized that your allegiance will be tested to your death, if you are not able to escape before the volcano erupts and burns you alive. Sub Terra II: Inferno’s Edge by ITB Board Games will require you to work together effectively and swiftly if you want to succeed. 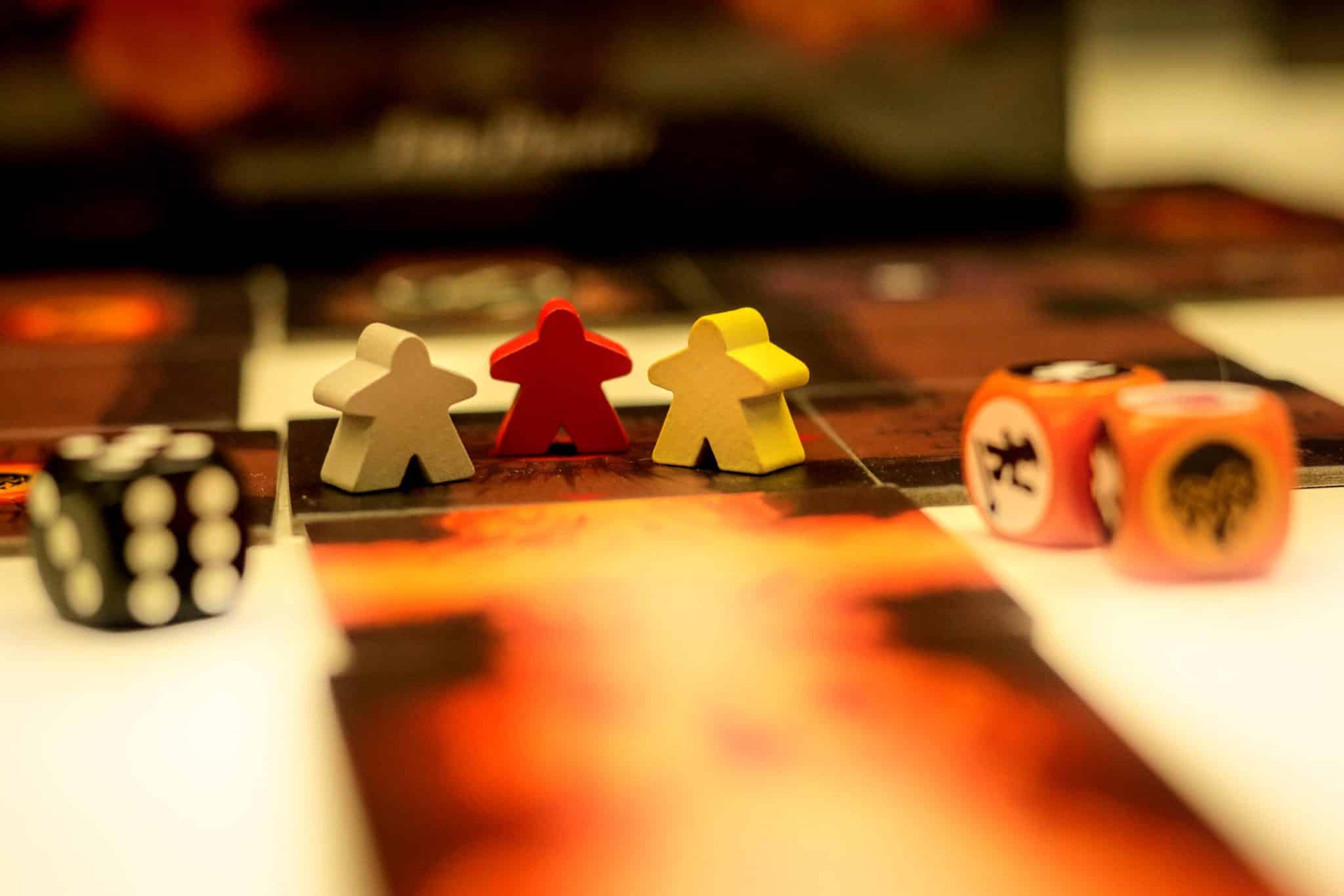 Photo courtesy of Inside The Box Board Games

As the successor to Sub Terra, which was another successful Kickstarter campaign for ITB Board Games in 2017, Inferno’s Edge is based in the same world, but is a completely standalone game. I have only ever played Sub Terra II, so I don’t know how it differs from its predecessor. All I can say is that here we have a light, fun, co-operative game of tile drawing and placing with asymmetric player powers and lots of dice rolling. I think you can tell from this sentence alone, that there is a lot of randomness in this game, which creates a level playing field and makes the game immediately ideal for players with different experiences and skillsets.

Sub Terra II is really easy to teach and learn. If you play it with friends and family who may otherwise not be interested in boardgames, they will pick it up very quickly within only a handful of turns. In fact, everyone will immediately have a feeling of agency when they choose between the different characters that come with the game, each of which has different special abilities.

The fact that Sub Terra II is co-operative is also useful if you want to play the game with people who are relatively new to boardgames, as they won’t feel like they’re on their own, which reduces the pressure on new gamers quite a bit. However, do bear in mind that the chance that an alpha player takes over is very possible in this game, which does very little to prevent a player telling everyone else what to do.

Where the game really shines for me though is the theme. Think of a very popular film franchise where an archaeologist with a fedora explores caverns sprinkled with deadly traps to retrieve a precious relic and escape alive, and you have Sub Terra II. The main difference here is that in the game you are all explorers and every single one of you has special abilities and a real taste for adventure. Other than that, you explore the tunnels of the volcano and discover traps and other dangers until you eventually reach the sacred temple that contains the sanctum, which you need to get out before everything is consumed by lava.

The excitement in the game comes from all the randomness. You randomly draw a tile from a bag and place it so that the tunnel ahead of you expands. The tiles are a mix of T junctions, crossroads or other safe places, as well as various traps and other dangers, such as collapsed sections or the ominous guardians. So you can never be quite sure what you will face next. Then, once you’ve taken your turn, you also have to roll the hazard dice, which may cause new guardians to spawn or for them to come and find and attack you. You may also cause sections of the tunnels to collapse, potentially burying your fellow explorers under a huge pile of rubble, or you trigger traps that injure you.

To make matters worse, at some point during your first game, you realize that you don’t just have to find the sanctum, but also have to get back out again. So all the traps and dangers that you faced on your way in are likely to greet you again on the way out, but now the team is already weakened and will find it much harder to survive further injuries.

Additional excitement and tension comes from the timer. There are only so many rounds before the volcano erupts and the tunnels fill with deadly molten rock. Again, this is beautifully done in the game. Every tile has two sides – the normal tunnel side and the lava side. The theme is brought to life really well by this very simple design decision. It’s almost beautiful to see the tunnels fill with orange glowing magma, until you realize that it’s spreading faster and faster and starting to kill your team. You get a real sense of panic as you try to flee, because the lava doesn’t just spread from one tile to another, but in a sort of chain reaction. That means all tiles connected to a lava tile are turned over at once, so you might have three tunnel sections all filling up in one go.

As a co-operative game, you basically play against the volcano and you can change the difficulty level by giving you more or less turns. There is a table in the rulebook that tells you the suggested number of turns you should use based on the number of explorers that play and the difficulty you want to try. However, there is nothing stopping you from setting the difficulty differently.

So Sub Terra II is really fun. It’s definitely a very light game with very little strategy. Every turn you just react to the situation in front of you, which is fine and really emulates how intrepid adventurers are portrayed in film and television, making up plans on the spot as they discover what’s ahead. So if you just want to have about an hour of exploring sacred caverns and fighting mysterious guardians, always having the threat of everything being consumed by molten laval, then this game is for you.