A handful of small trees stand at the edge of a clearing. The wind blows gently as the sun starts to rise in the east. You can almost see the trees reaching for the light, as they slowly convert the sunshine into sugars, which is used to grow and produce seeds. Each species will have different survival strategies, but all trees have a natural urge to disperse their seeds towards the middle of the clearing, where there is less competition and more fertile ground. However, it won’t be long until the many saplings have filled the available space and the fight for sunshine will become more and more intense. In the meantime, some trees will have grown old and will die, freeing up precious ground for seeds to settle and hopefully germinate. It is for you and up to three of your friends to look after your rootstock in Photosynthesis by Blue Orange Games. 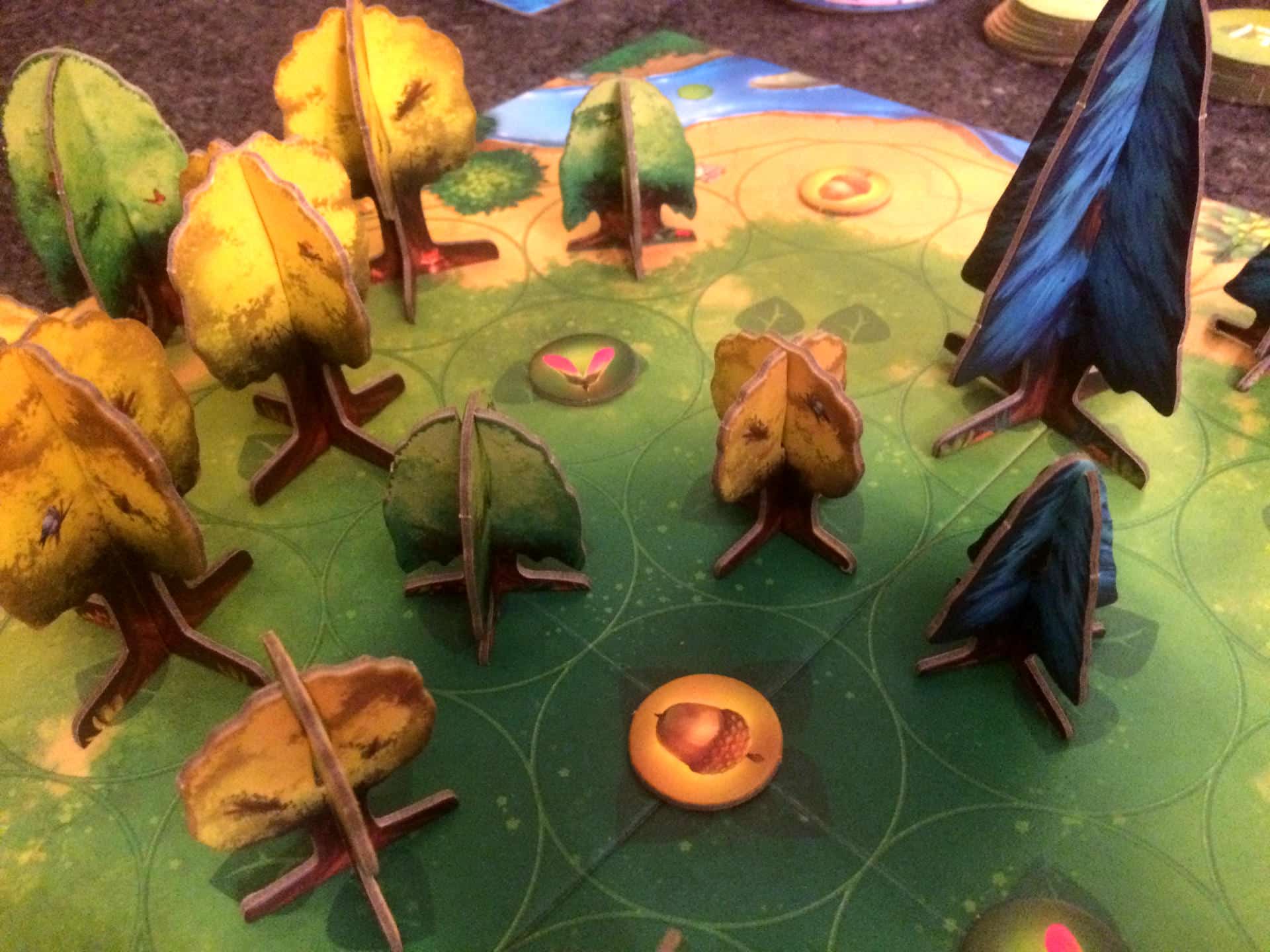 First off, the game looks absolutely stunning on the table. The cardboard trees of different sizes, colours and shapes are beautifully illustrated. During the game, the trees create the look of a real mini woodland and they are very tactile. While the game board looks rather bare at the beginning, it soon fills up with trees, which grow, spread seeds and die each turn. The scenery is in constant change, and everything goes at a lovely slow pace, closely mimicking the time it takes real trees to grow from seed into majestic specimen. It all feels very organic and natural, in particular because everything is made from cardboard, which is very fitting for a game about trees.

In fact, everything is beautifully illustrated, with lots of detail. Every tree is slightly different, not just from player to player, but within the trees of the same player. There might be a bird hiding in one tree, and another might have a squirrel in it. The same is true for the player mats, while the game board is kept relatively simple to make gameplay easier – but even it has lots of detail around the outside. So, as I said, the table presence is amazing and really invites you to play.

At the same time, learning the game is very straightforward. The rules are really simple and the rulebook consists of four pages, one of which is for the contents, another half page for the setup. During gameplay the player mats incorporate a little player aid, telling you how much different actions cost, all done in a very visual manner, making it easy to see what you can do and what you need to pay. Even the track that counts the “light points”, which is the currency in the game, has a little track to the side of it, which tells you how they translate into end game victory points. It’s really all there in front of you.

However, there are two things that really make Photosynthesis stand out for me. First of all, there is the sunshine, which moves around the outside of the little woodland clearing, and which decides which trees receive light. It forces you to think ahead at least two turns to decide where you want new trees to germinate and which trees you want to grow taller. It’s a very simple mechanism, which adds a whole level of planning, while at the same time feeling very thematic and intuitive.

The other thing is that very simple rules create a very strategic, or at least tactical game. I very quickly compared Photosynthesis to chess during our plays, but while chess is very difficult to learn, Photosynthesis gets you playing very quickly, and it is a matter of playing several games to see what different approaches you can take to get the most points at the end. It is this emergent level of gameplay that only becomes apparent when you start playing, that makes this game feel so wonderful for me.

However, the need to plan ahead is also frustrating sometimes. After all, a lot can happen in two or three turns, as other players’ trees fill the clearing, and all you can do is change your tactics, hoping to resume your original plan later in the game. At the same time, you can’t just play this game from turn to turn, because it takes you at least two turns to plant a seed and make it grow into a sapling, at which point the sun will have moved around the board as well. If you don’t think at least two turns ahead, chances are that your trees will sit in the shade and you might not be able to take any or at least only very few actions on your next turn.

Also, you will probably find that players will go for specific starting spots for their trees every time, creating a very similar starting setup, therefore reducing some of the variability that you might expect. However, just like there is a limited number of well-known openings in chess, each game of chess will be different as it progresses, and the same is true for Photosynthesis.

So for me, Photosynthesis is a game that I enjoy playing, especially because it can be played within an hour, but it’s not a game that I’m itching to get out again as soon as possible. I do want to try it with two and four players, as I have only played it with three so far, and I expect it will play differently, but even so it’s not enough to make this game a real favourite for me. I will keep it in my collection though, as it’s one of those games that is easy to teach and quick to play.