A hook, as per the dictionary definition, is something that draws you in. In games, a hook can be a number of different things. Often it is something visually exciting, such as beautiful illustrations, amazingly detailed miniatures, realistic resources or some sort of physical component that is integral to gameplay. Hooks can also be an interesting theme, an exciting gameplay mechanism or even the background story behind how a game was made. Certain awards or even the price of a game can be a hook too. Ultimately it’s about finding something that grabs your attention and gets you to take a closer look. 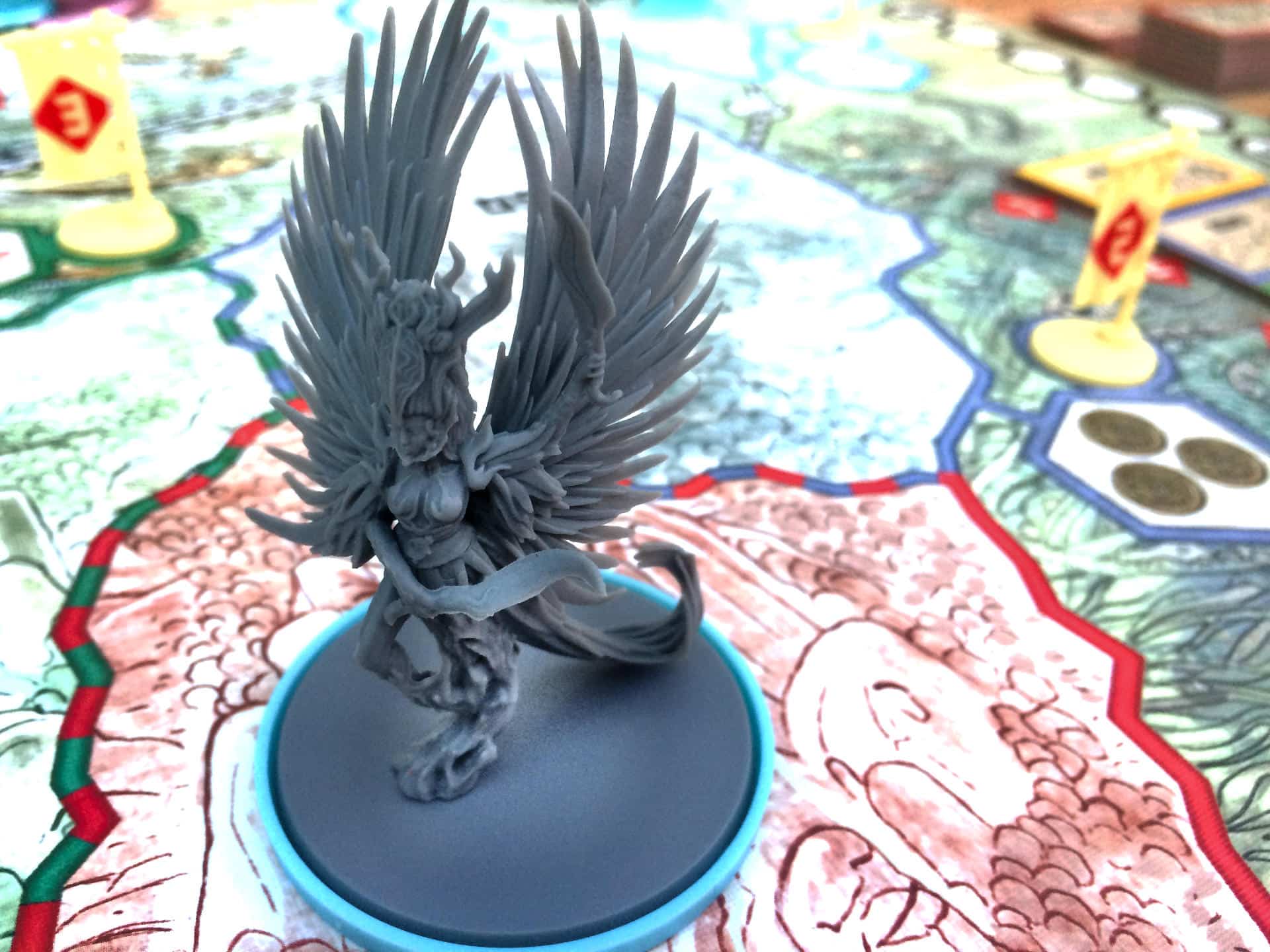 Some of the physical hooks in tabletop games I can think of include the gears in Tzlok’in by Czech Games Edition, the marble dispenser in Gizmos by CMON and the cardboard tree in Everdell by Starling Games. These are probably components that most people will know, even if they have never played those games. Physical components are a big draw for a lot of people of course. They really enhance the table presence of a game. They are tactile as well, adding another level to playing a game.

Miniatures and realistic resources are another two groups of physical hooks. Miniatures, in particular, have become very popular recently. They not only give the game an enhanced visual presence, but they also have an overlap with another hobby – miniature painting. So if you’re a tabletop wargamer, then games like Rising Sun by CMON or Dwellings of Eldervale by Breaking Games are likely to appeal to you too – and if you enjoyed painting your wargame miniatures, then boardgame miniature painting should keep you busy too.

Illustrations are also great hooks in games and many recently released games look absolutely stunning. My favourite example is Sycthe by Stonemaier Games where Jakub Rozalski has created a whole alternative world which is not only used as a backdrop for the game, but also an integral part of the theme – and theme can, of course, be another hook for games.

There are more non-physical hooks, such as the augmented reality app in Chronicles of Crime by Lucky Duck Games, and there are many more different things that will get your attention, make you look at a game more closely and get you excited. The list is very long indeed and I really only wanted to offer some examples.

A lot of hooks are an integral part of gameplay, but there are games where they’re just gimmicks or novelties that make the game stand out from the rest, but aren’t actually needed to play the game, even though they often enhance the enjoyment of a game from an aesthetic perspective of course, which in itself can be enough.

I don’t want to pick on a specific game, but let me use the tree in Everdell as an example to illustrate where I think a hook has become nothing else than a novelty. The tree doesn’t provide anything that you need to play the game. In fact, the tree uses up a lot of space, and there have been many complaints that in a four-player game the tree actually becomes an annoying obstruction for one of the players or forces everyone to sit closer together to leave room for the tree. However, it does look amazing and really adds to the atmosphere of the game. It does create an impressive table presence.

The marble dispenser in Gizmos is another example of a gimmick, even though I’d argue it actually serves a purpose. You could easily replace the dispenser with a bag and simply draw the relevant number of marbles by hand and line them up on a track. However, the dispenser is great, because it automatically refills the marbles as they are taken, removing the need for you to draw new ones or to have to remember to draw new ones, allowing you to focus on the game. So to me, it’s maybe not integral to gameplay, but certainly makes things more convenient for players.

I think most will agree that the gears in Tzolk’in are not a gimmick. I would say they were innovative at the time, even though you could argue that it would be possible to create the same mechanism by other means, but in reality having to keep track of where things are on the cogs and keeping everything in sync without the gears would have put more pressure on players and created unnecessary housekeeping that would have seriously distracted from gameplay. So even if you don’t think they were innovative, they certainly aren’t just a gimmick.

When we look at the other end of a game’s life cycle, then we’ll find that game designers sometimes start their design with a hook. They may have had a great idea for something that will create interest and then go from there to create a game. They add mechanisms and theme and everything else by using the hook as a starting point. Like with all game design, that is absolutely fine. Game design can start in different ways. Sometimes a mechanism is the basis for a game, sometimes it’s a theme, sometimes an interesting component and sometimes a mix of different things.

However, there have been games where the hook was too heavily relied on to make the game fun and it just didn’t work. Mechanisms, balance, art, theme and everything matter too. I would argue mechanisms and theme are the two most important parts of a good game, but it doesn’t really matter, because ultimately a great hook alone is not going to make for a great game. There is a lot more that is needed to make me want to play a game again and again and again – and enjoy it.

On the flip side, a game without a hook will find it hard to stand out in the deluge of games being released these days. It is almost in the definition of the term. If there is nothing about a game that attracts attention, then nobody will look at it, which means nobody will buy it. However, something that’s a great hook for one person may be a turn off for another. As I said before, someone might be drawn in by stunning artwork, other people might be looking for a game with a new mechanism, others might swear by certain themes or IP in games. We are all different and have different expectations.

What is a hook for you when it comes to tabletop games? Do you care much about hooks? What game did you buy because of a great hook, but then was disappointed when you got to play it? Was there a game that had no specific hook, but had something else that made you really enjoy it? Please share your thoughts in the comments below. I’d love to hear what other people look for in games and how hooked you might get on hooks.