Travelling to games night, weighed down with a giant bag full of games isn’t easy. I appreciate that many people have a car and use that to get to games night, and that makes sense, especially if you travel a bit further. However, if your friends live only a short while away, then going by bike would be another, and possibly better, option. Yet, a lot of bikes aren’t really designed to carry much. Yes, you could get panniers, but they’re not ideal. However, these days there are a lot of utility orientated bicycles available from your local bike shop, or you can go one better and get a custom-built bike that is not only up to the task of ferrying around bulky loads, like board games, but is also made exactly how you want it. 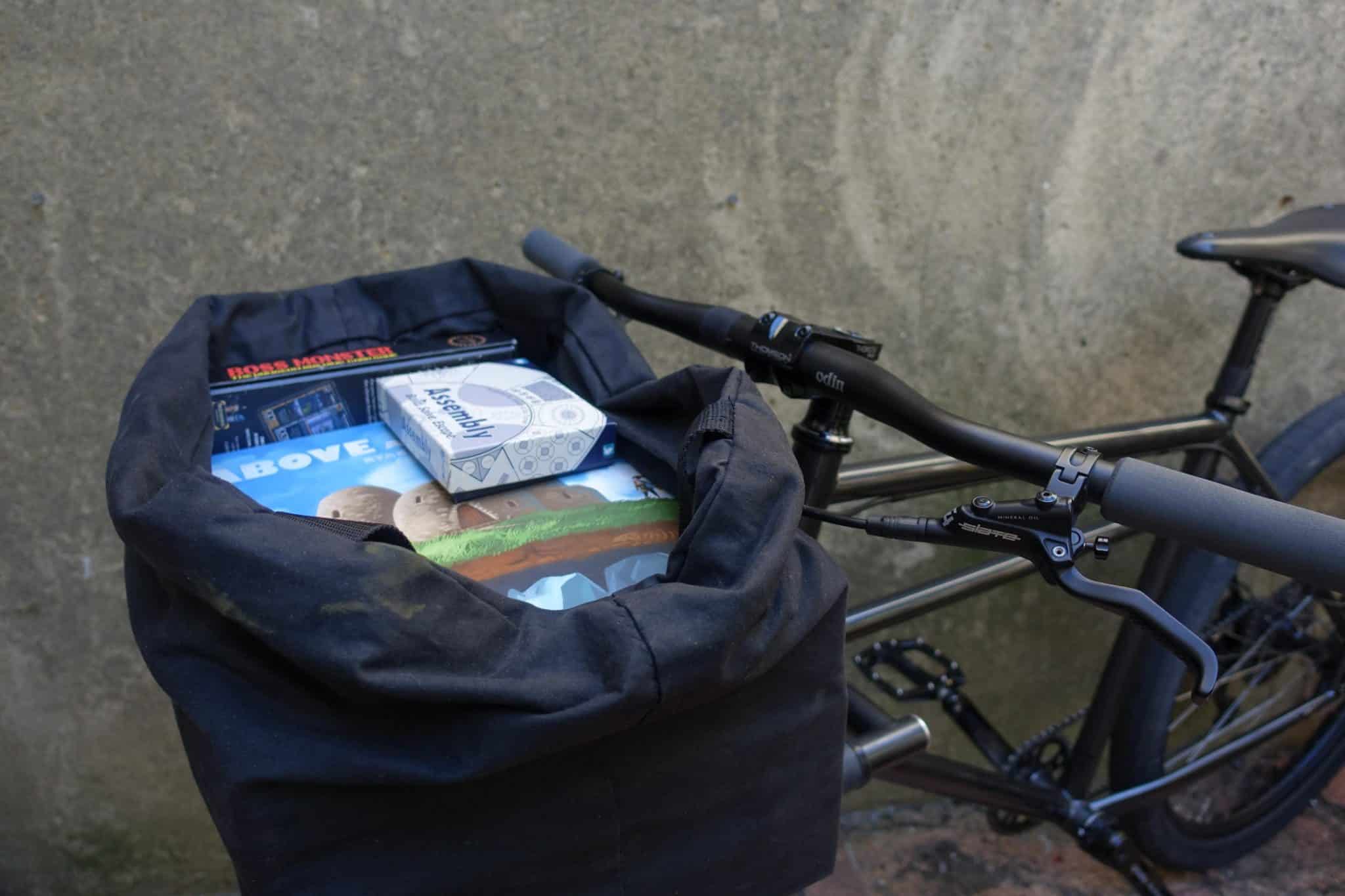 Now you’re probably wondering why I’m talking about bespoke cargo bikes on the blog. Well, a friend of mine, Tom, who is also part of our weekly games night group, has dealt with the problem of getting games to games night. He builds bespoke bikes under the brand Old Grey Electric Co, and he made himself a cargo bike to carry things around town and to bring games to our games nights, along with homemade snacks – he makes amazing vegan cakes and cookies. Not only that, the bike won the Bike Radar Choice Award for utility/load carrying bikes at Bespoked this year.

The bike he made is great. As you’d expect, it can carry a good number of games with ease. Only the other day he took Scythe, along with the Invaders from Afar and The Wind Gambit expansions, as well as Smallworld back home on his bike. As you may know, these are quite bulky boxes, and Scythe in particular is rather heavy, and the bike handled it easily. People often worry that cargo bikes are more difficult to steer and handle, because of the extra weight at the front and/or back of the bike, but fret not. The bike is stable and steers normally despite bulky and heavy loads by keeping the weight low and having the steering geometry designed to minimise the side effects of your cargo.

You may have found in the past that heavier bikes are harder to steer and handle, but Tom has thought about this too. Despite the bike looking chunky and heavy, it’s actually really light and ride quality and handling is very similar to a regular bike. If you add a few kilos of cargo, you won’t notice a lot of difference in steering or handling, because the total weight of bike, rider and load is still comparably low. However, you will have to take a bit more care when riding the more load you’ve put on the bike.

The bike that Tom built for himself has a platform bed at the front which is an American style design called a cycle truck, designed to take crates or a bag in Tom‘s case that he designed and made to fit most of our larger games. It’s just one of the many options modern utility orientated bicycles offer, including those from other brands such as Tern, Omnium and Harry vs Larry. Tom is more than happy to answer any questions so check out his Instagram page and DM him for more information. You won’t be disappointed and you could end up with the bike of your dreams.