I don’t like word games. Even though I love writing, which is one of the reasons for this blog, I was never any good at crosswords or Scrabble, and it’s not because English is my second language. Even when I do a German crossword or play German Scrabble, I’m still not very good, at least not compared to my parents or a couple of my friends who seem to excel at these. Yet, when I play Hardback by Fowers Games, I have a lot of fun and have a good chance of winning. 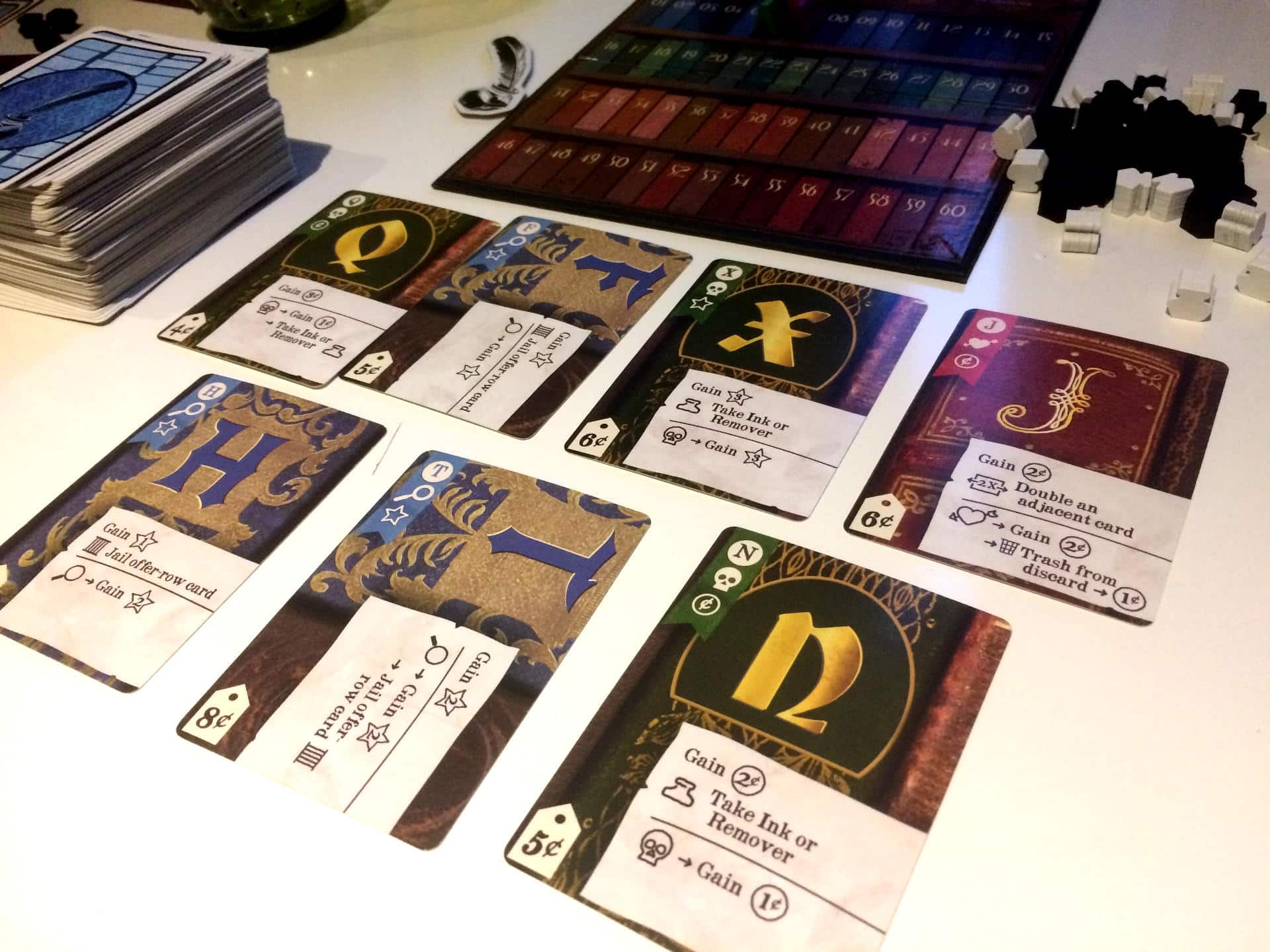 At first glance, Hardback takes the concept of Scrabble and turns it into a card game. So instead of letter tiles, you have letter cards, and in both games you use the letters to make words, which must not be proper nouns, acronyms or abbreviations, but otherwise can be plurals, declinations, conjugations, etc. However, that’s where the similarities end.

Instead of drawing seven letters from a bag, as you do in Scrabble, in Hardback you draw five cards from a starting deck of ten, which will be familiar to people who have played Star Realms before. In Hardback, you also play each word by itself, rather than extend or connect to existing words. Each card gives you victory points or coins, and you use coins to buy new cards from an offer row of seven cards.

The offer row cards come in four different colours, representing different types of bonuses, which are more beneficial than the cards from your starting deck. So you might get more coins or more victory points, or you might be able to scrap cards from your discard pile, or double up the bonuses from an adjacent card, etc.

As you read this, you will probably be reminded of Star Realms, and Hardback is indeed very similar in this respect. You’re basically building a deck of cards, thinning where you can, and aiming to get colour combos to get additional bonuses. Trying to stick to only one or two different colours is recommended, so you are more likely to have two or more cards in your hand on your turn.

However, let’s go back to comparing Hardback with Scrabble. There are no double letter or double word spaces, but as I mentioned, some of the cards double up the bonuses of an adjacent card, which is sort of similar. Hardback also allows you to use any card you want as a wild, but you will lose its bonus values if you do so. That way you will always be able to spell a word, even if your hand consists only of consonants for example. Like in Scrabble, you don’t have to use all letters to form a word. Hardback also allows you to draw extra letter cards from your deck, but these will then be locked in and you are forced to use them in a word. That way you can make longer words, but you may end up with a letter combination that is impossible to use, in which case you will not gain any bonuses.

Alas, if you are ever stuck, you can offer other players to become ghostwriters. You put your hand of cards face-up in front of you, and other players can suggest a word. If you decide to use their suggestion, they will get a little bonus, and it’s this semi-cooperative approach that is very neat.

As I said before, I really enjoy playing Hardback. It’s a lot of fun to make words, knowing that you can always have wilds to hand, in case you get stuck, and in Hardback it’s not about making words with difficult letters, or long words. In fact, short words can actually score you more than longer words. It feels a lot easier and enjoyable. The game is a great mix between a deck building and a word game, giving players different ways to win.

So I can really recommend it, even if you don’t like word games normally. I reckon you will be pleasantly surprised with Hardback.