If you like dice action selection games where you slowly build up action combos, then Oaxaca: Crafts of a Culture by Undine Studios is for you. Now don’t be put off by dice rolling, because in this game you can easily mitigate bad luck and even bad rolls still give you plenty of opportunities. Oaxaca (“wa-ha-ka”) is also beautifully illustrated, quick to learn and really quick to play, while still maintaining enough interest even for very “serious” gamers. So there is something for everyone and one of the few games that I can confidently recommend for family gaming as well as regular games night groups. 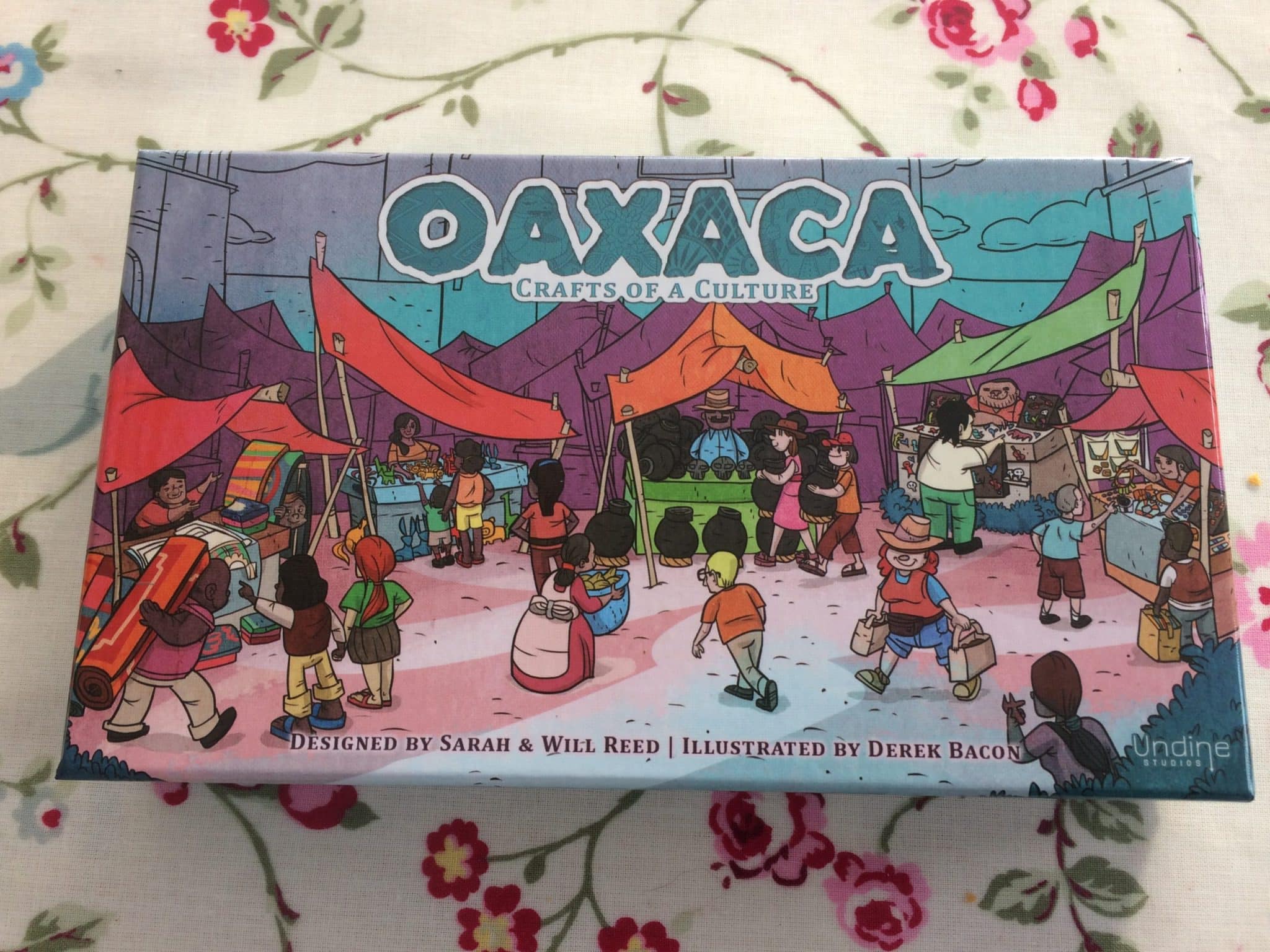 Let me say at this stage that I received a copy of the game from Undine Studios (thank you Sarah!) free of charge, and that Sarah Reed is one of my Patreon supporters. However, that hasn’t influenced my view and enjoyment of the game. I was also not asked to review the game, but of course it was an ideal opportunity for me to write another article. So knowing all this, you can now decide for yourself if you trust my opinion of the game or not. Anyway, let’s continue.

Oaxaca is set in the region of Southern Mexico with the same name, but as far as I have seen, there is no Tequila involved. That is absolutely fine, because your task is to craft traditional items in your workshop and sell them in your market stall, which will keep you busy. Each round all players roll five dice, which they can re-roll once if they so wish, and which represent the types of craft they can work on or select to place in their workshop. Every dice can be used to either work on items in your workshop, or add more items of that type to it.

So on your turn you choose a dice, and while your workshop is still empty, you add an item of the type shown on the dice face to your workshop. Each item requires different amounts of work, represented by a number of cubes placed on the item as you place it into your workshop – and the more work an item requires, the more points it gives you at the end.

That sounds simple enough, but the twist comes when you decide to craft items in your workshop. When you play a dice you work on all items of the type shown on the dice face that are currently in your workshop. So it benefits you if your workshop is full of items of the same type, because you can craft more items with one dice. However, chances are that end up with many different dice results, even after re-rolling. So it might be better to diversify a little, but it will depend on your dice.

Already you have to think about the dice you have in your pool and how you are going to use them. You have the option to play two dice as a wildcard, allowing you to use them as if they were a single dice of a type that you need. That uses up more dice of course, meaning you run out of options quicker, but it might allow you to finish an item and gain points sooner.

Finished items are placed in your market stall, which not only means they are worth their full points for end game scoring, but they also gain an ability, shown at the bottom of the item card. So finishing an item allows you to do more on your turn. The item abilities could simply be an extra dice of a certain type, or possibly an option of a number of types, or allow you to remove extra cubes from items in your workshop, depending on what action you have taken and with what dice.

The item abilities basically allow you to create action combos, where a single action suddenly gets so much more powerful, and you really have to think about what you do in what order to get the biggest benefit. It is this that I think is what will attract gamers who like thinky games. Anyone who likes to think a few steps ahead will enjoy this part, but at the same time I don’t think this part necessarily creates analysis paralysis. You can simply take your actions in the normal way and use the abilities as you see fit, without creating epic action combo chains. It really depends on the type of player you are.

There are also an additional two bonus actions, called tourist cards in the game, which you can use once per round and which are different for each round. These are just another way of trying to craft more items in the three rounds that the game lasts, but they aren’t necessary to win. They are more about creating more variability and replayability, but I think the dice rolling alone and the huge stack of craft items that is shuffled every game, already create plenty of replayability.

The game length is really good too. It’s maybe a little long to fit the filler game category, but it’s quick enough to get at least one game at the beginning or end of a games night – or even have several games all night. The fact that the game ends after exactly three rounds also helps – and it’s exactly the right amount of time to build up your market stall and start getting combos, without it getting too out of hand. The game basically ends exactly at the right time, which is a great plus for me.

One last thing I haven’t talked about so far is player interaction. Depending on the types of items you craft, there can be a fair amount of player interaction. Some items allow you to add cubes to other players’ workshops for example, which in a two player game can create a bit of tension. However, it’s usually not such a huge extra burden for the other player to deal with that it becomes frustrating. Also, when you add an item to your workshop, you actually look at the top two cards of that type, choose one to keep, and then you can put the other either back on top of the stack, or at the bottom. That means you can try and push a really bad card onto the next player, or deny other players a really good card. Again, that’s not a major thing though in my view, so care bears shouldn’t need to worry – but please correct me if I’m wrong by commenting on this article.

There is also a solo mode for the game, which I haven’t tried yet, but which is a great feature. Too many games ignore solo players, so having this option right out of the box is another plus for Oaxaca.

As I say, I can highly recommend the game to play with your family, because it’s relatively easy to teach and very quick to play, giving players a sense of achievement after the first round, if not sooner – but it’s not a light gateway game that will bore more heavy gamers, because half-way through round two you will have enough items in your market stall that you can chain actions together to create amazing combos, giving those players something to think about. It has the best of both worlds in my opinion, so I’d say check it out yourself and see what you think.