Yes, it is nearly the end of 2018, so it is time to list Tabletop Games Blog’s top 5 games of the year. It has been a great year for tabletop games in general, and I have been lucky enough to play nearly 25 different games over the year, including playtesting, PnPs, online games as well as games played during our weekly games night, with family and at MeetUp sessions. So I thought choosing 5 from those games would be a good number. 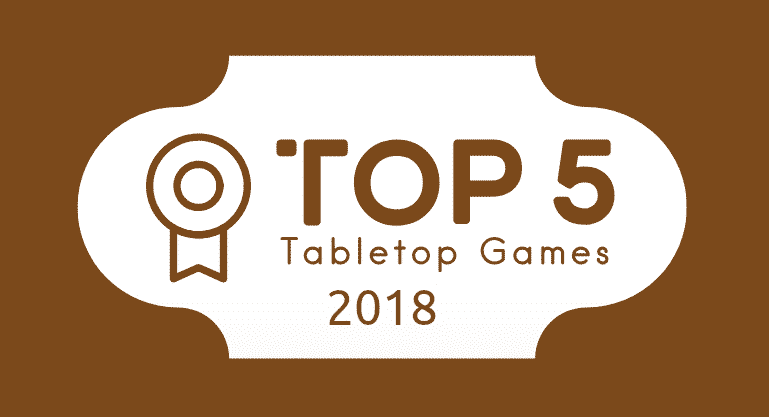 The selection is based purely on games that I played at least three times, to create a more balanced list, rather one that is based on a great single play that may have skewed my view of the game. The whole list if very subjective and is not a list of recommended games, even though, if you did ask me, I would of course recommend every single game on the list.

So here goes, in reverse order of course to follow the tradition of these types of lists and build the tension.

#5 – The 7th Continent by Serious Poulp

In my view The 7th Continent by Serious Poulp is the first choose-your-own-adventure tile laying game and for me it really delivers. I also think it is the first co-operative game where all players can really decide to do their own thing, because it is rarely really clear what the best decision is at any point in time. Maybe you should go and help your teammate get out of the deep snow, but then the beach looks really interesting and you feel like catching some crabs.

Each curse, as the different chapters are called, plays over many, many hours, and there are many curses to play. So you have days, if not weeks, that you can play this game and discover something new. Yet, it is up to you how long each session of play lasts, because the game comes with a great save mechanism that allows you to (virtually) stop at any time and pick up the game again at some point later – without losing the game state.

Of course, the game isn’t perfect, and in fact restoring the game after saving it is one of the complaints people have – but the artwork is beautiful, the game is really hard to beat and you really feel like you’re exploring a new continent, never knowing what might happen next and when your group will die.

It is almost a gateway game, if you have an experienced player in your group, because you can do so many different things and there are plenty of surprises. There is very little strategy involved, so even though you want to plan a little and aim to keep your group alive, you are free to go in any direction and freely explore the world you have discovered. It is definitely a game I will want to play again and again.

Links for The 7th Continent

I do love a game with lots of player interaction, strategy, battles and, of course, minis. Well, in the case of Rising Sun by CMON you get a great mix of all of the above – and the minis are actually biggies, or as I have started to call them, bigatures. In the game you control an army of warriors to fight over regions in Japan, you send your shinto to pray for the favour of the gods, you order monsters to boost your forces and form and break alliances to further your plans. Every player controls a different clan, each with their own special ability, which creates interesting dynamics between clans and means you have to adjust your strategy accordingly.

It is quite a heavy game, but that is probably why I love it so, and there are many ways to gain points and win the game. The alliance mechanism is probably one of the most interesting part of the game, because certain clans work well together, forcing other clans to form less strong alliances to stand a chance to win – but there is always the threat of betrayal, which breaks the alliance and gives the betrayer an advantage. However, you do have to also watch your honour, so betraying may not be the best choice in every situation.

I always look forward to playing Rising Sun, even though after a round or two my brain starts to hurt and I find it hard to keep track of what the different monster abilities are. Yet, it is exactly that that makes the game so exciting and interesting for me, and I just can’t turn down a game with beautifully detailed miniatures that you can push around a map.

#3 – Above and Below by Red Raven Games

Above and Below by Red Raven Games has a special place in this list, because it seems to have been part of my family since 2015 – on and off. It was one of the first game that we played with our daughter, after enjoying it a lot in our games group – and it was the game that brought our daughter back to the games table after a year or so of games abstinence. So for that reason alone it’s one of my top games.

However, the game deserves this place for many other reasons too. The art by Ryan Laukat is obviously brilliant and suits the game so well – like all of his games. His style is beautiful and really draws you into the worlds he creates in his games. It is also great for the little adventures you encounter when your party goes Below to explore the caves. The little stories are lovely and the decisions you have to make will influence the outcome. Of course, the other great thing is the amount of luck involved, which really levels the playing field and allows people of all levels of experience to have a good shot at winning the game.

As a two player only game, this one stands out from the rest. However, Codenames Duet by Czech Games Edition is really addictive. The premise is very similar to Codenames, in that you are trying to give a single word clue to your teammate which represents as many words shown in the five by five grid of face up cards. The problem is, that you want your teammate to select only specific words from the grid which match highlighted positions on your secret key card. If the words conspire against you, finding the right word can be really tricky and you have to start thinking much more out of the box. For example, three of the words on the table may be animals, but on your secret key only two of those words are highlighted. So you have to find a clue word that links only those two words, without your teammate being tempted to select the third word, which you don’t want them to say.

The description above really doesn’t do the game justice. You have to play it to really feel how much fun it is to try and get into your teammate’s head and lead them to find only those words that you want them to find. More often than not do you end up with giving only very vague clues, because there simply is no way to connect Notre Dame, beard and smoke. The game will keep you going for days and days and never stops being fun.

Yes, this great card building game is my absolute favourite from 2018 – and will continue to be played in 2019 of course. In Mystic Vale by Alderac Entertainment Group 2-4 players start with the same deck of cards which they upgrade during their turn by buying and sleeving advancements. The game has an element of chance, like most deck building games, which you control by deciding what advacements you buy and what card you add them too – and there is the option to push your luck and therefore increase the element of chance in an attempt to get more cards played to give your more symbols that you convert into better advacements or even so-called Vale cards that can give you special abilities.

I absolutely love this game because it has a great mix of chance, push your luck, multiplayer solitaire, easy-to-learn rules, the right level of complexity and also beautiful illustrations. It also plays relatively quickly and it feels so satisfying when you have upgraded your cards so that you can play (almost) your whole hand every time. Like in most deck builders, you start slow and then things ramp up. It deserves the number 1 spot completely and probably leads by a good margin.