In my third review I look at another digital conversion by Digidiced that Asmodee Digital was kind enough to let me try out. It is another Lookout Spiele game by designer Uwe Rosenberg. In Agricola: All Creatures Big and Small (I shorten this to just Agricola for the rest of this article) you are a 17th century farmer in central Europe. It is a very clever 2 player only worker placement game where you have to manage your resources, life stock and farmland. Of course, this game also has some clever little twists, which make the gameplay so interesting. 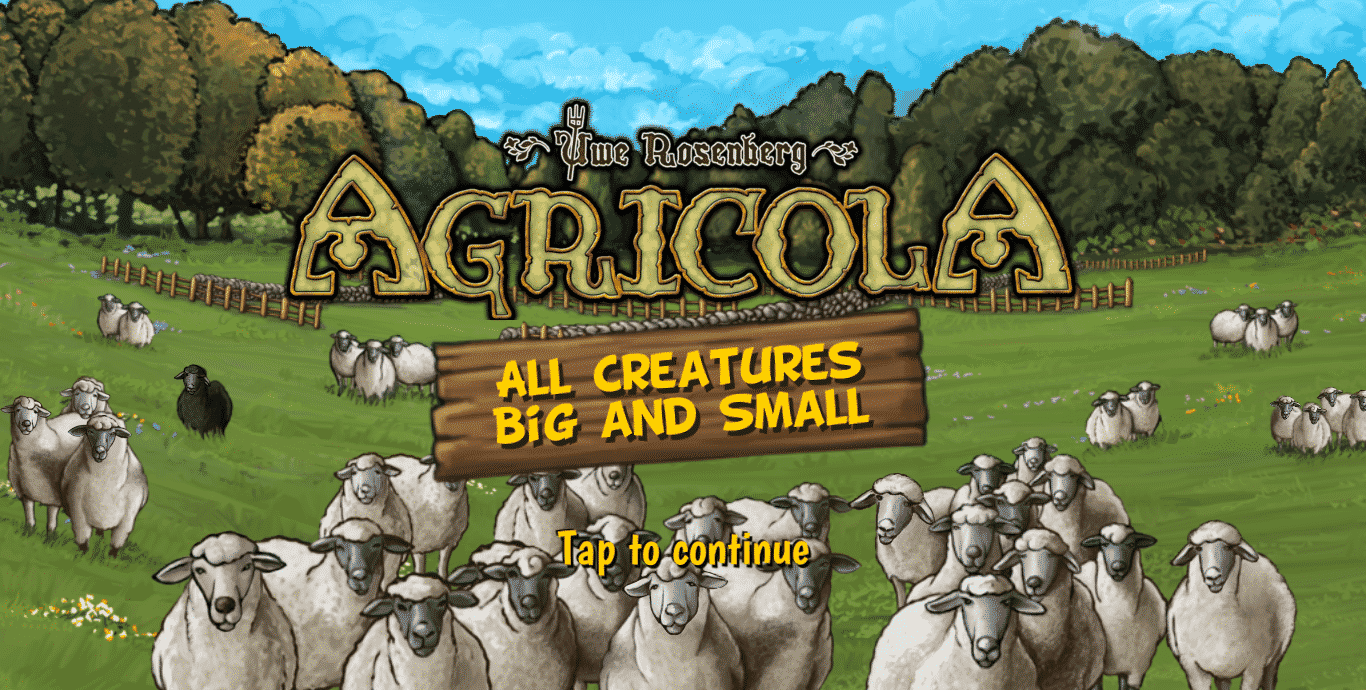 In most resource management games you take your resources and are not limited by how many you can have – and resource usually don’t automatically increase without you taking any actions. However, in Agricola your life stock, which will consist of sheep, pigs, horses and cows, automatically increases during the so-called breeding phase, provided you have at least two. The problem is, there is only so much room for your animals, so you may end up having to set some of them free.

The game starts quite tame, allowing you to build fences and increase the capacity of your land while you still only have a handful of animals. However, by round three things become more hectic. You continually try to fence off more land, place troughs or build stables and other buildings just to keep up with the extra animals that pop up during the breeding phase.

The problem is you only have three actions during each round, and once an action space has been taken, nobody else can go there, meaning you have to consider what actions are most important to you and where the other player is likely to go. Trying to keep track of what is going on in your neighbour’s field isn’t too much of a problem in of itself, but you are usually busy enough keeping control of your own farmland.

The other challenge is that your aim is to breed a variety of animals. Simply specialising in one type is not going to get you many points. You want a different animals and a lot of them, while at the same time increasing your pasture to keep up with the growing herds. If you still feel in control in round five or six of the possible eight rounds, then you have probably missed something important, and more likely than not, the newly bred animals will have no room and will have to be let free.

Being a two player only game, there is a lot of player interaction. In fact, it is a key element of the game and even if you don’t intentionally try to block the other player, chances are that both of you will want the same thing at various points during the game. Saying that, there are sixteen action spaces overall, even if not all will be available to you, depending on what resources you have to hand.

Speaking of which, the resources are another thing you have to keep track of. Building fences, troughs and stables needs wood, stone or reeds. So you have to make sure you stock up on what you need as one of the three actions during a round. It is yet more to keep track of and makes the game more complex.

Mind you, Agricola is still only a medium heavy game and shouldn’t be too hard to learn. Of course, if you play it as a digital game, the app will teach you how to play. As seems to be always the case with games from Digidiced, the tutorials are really clear and get you playing virtually straight away. I found the first game I played after the tutorial relatively straightforward, even though the sixteen action spaces still took a little while to get used to.

Given the complexity of the game, the easy AI is still quite hard to beat, but it doesn’t feel impossible. As usual, you can of course choose a computer opponent that is more difficult as you get better at the game.

I certainly enjoyed playing Agricola and can’t wait to play it again. It will keep me entertained for some time to come, and I reckon if you like worker placement games, you will like this one too.