A murder had been committed and three suspects were found at the crime scene, but only one of them was the murderer. One of the detectives was already at the scene and had spoken to two of the suspects when you arrived. The detective told you who they thought was the killer, but you wanted to be sure. You pulled the other two suspects to one side and interviewed each of them in turn. You quickly knew who had committed the murder and logged down your suspicion. The only thing that wasn’t clear, was why the crime scene was In a Grove by Oink Games. 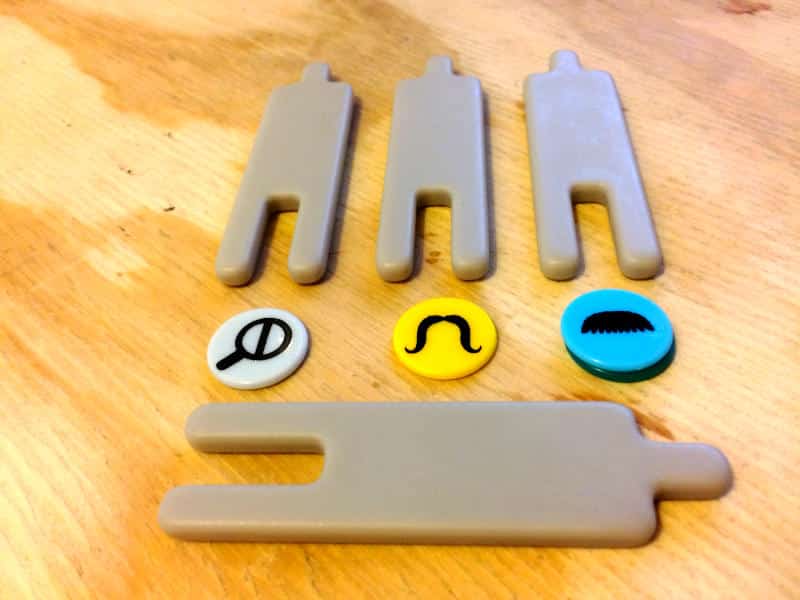 Oink Games are famous for their wonderful games that are easy to learn and come in a small box, slightly bigger than a standard deck of playing cards, with bold and brightly coloured illustrations on the outside and really high-quality components inside. So, as you can see, I’m already influenced by the fact that In a Grove is an Oink game. Yet, my high expectations also mean that the bar is set high for this wonderfully quick hidden information and deduction game.

Actually, let’s start with the playing time. Depending on how many of you there are and how long everyone takes to come to a decision, the game can easily be played within 15 minutes. My wife and I always took less than 10 minutes to complete a full playthrough. The fact is, that there isn’t too much to think about when it comes to your turn. You can only choose one of two suspects – that’s it.

As I tried to allude to in the introduction, the theme of the game is the scene of a murder and three suspects have been found. It is up to you to identify who committed the crime, but you only have limited information. Depending on player count, there are between seven and nine so-called person tiles, seven of which are numbered 2 to 8 and then there are either no, one or two person tiles with a cross on them. Out of the person tiles, one is the victim and three are the suspects, all of which are randomly chosen and put face-down, so nobody knows which number persons there are. The remaining person tiles are distributed to the players, face-down again, and each player can look at their person tile as well as that of their right-hand neighbour. In a two-player game, instead of looking at the other player’s person, one of the tiles is played face-up in the middle for both players to see.

Either way, everyone now has two pieces of information to try and decide who the murderer is. Then every player takes a turn secretly looking at two of the suspect tiles, giving everyone two more pieces of information. That’s all there is to decide which suspect to accuse of killing the victim. It’s clearly not enough to go on, at least most of the time and players end up bluffing that they know the answer, when they definitely don’t.

In fact, bluffing is a huge part of this game. If you can convince other players to accuse the same suspect, but everyone is wrong, then whoever accused the innocent person last will get a hefty amount of negative points. That’s sometimes the only way of turning the game around if you’re behind and that’s what makes for memorable moments in the game. If you successfully bluffed and gave another player lots of negative points, bringing you back into the game, you feel very proud and clever.

In a Grove is the sort of game that you need to play with the same people several times, because it’s the metagame that develops from trying to work out if someone is bluffing or not, which makes this game so much fun. In itself, it’s a really simple, quick game, that can get a bit repetitive. However, if you have a group of people and everyone realizes that they can win by leading everyone else onto the wrong track, the game suddenly really shines.