There was one creature waiting in each corner of the square battle arena and a tower of tiles was in its centre. It was the quiet before the storm as the players looked at their five tiles and silently contemplated the best way of playing them. It was vital that tiles were placed in the right place at the right time to score the most points, while denying other players their chance of racing into the lead. After all, only one of the players would be victorious in this Kombo Klash by Hub Games. 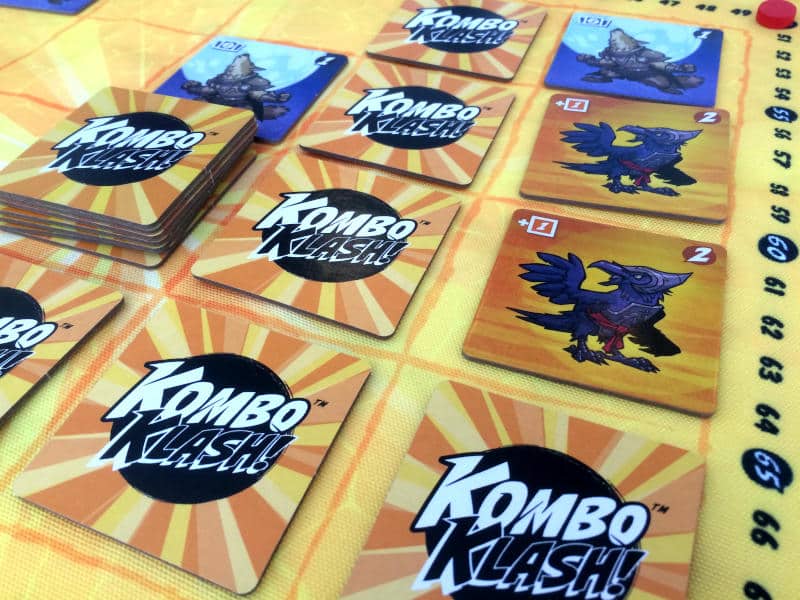 Hub Games are known for making great games with high-quality components that can be played by the whole family. Some are aimed at a younger audience, others are more suitable for older players, some are lighter, while others are more serious, but they all share the same ethos: appealing and being accessible to a wide audience and striving to be as inclusive as possible.

Kombo Klash is no different, of course. It is probably aimed at younger players, as it has wonderfully vibrant comic book style artwork, comes with very thick cardboard tiles, that will survive a lot of tough handling and rules that are really very straightforward and quick to learn.

However, I think Kombo Klash will actually appeal to a much wider audience than maybe older children and teenagers. I actually think the game is great for anyone who likes a bit of tactical shenanigans or chaining their actions into huge combos. After all, there is a clue in the title.

In Kombo Klash, you have a hand of five tiles, representing a mix of eight different creatures. On your turn, you play at least one of those tiles into a five-by-five grid, adding to tiles that are already on the board or extending from the central square outwards. You’re creating chains of tiles that are horizontally or vertically adjacent. If you manage to chain together at least three tiles with the same creature on it, you can score them, at which point they’re turned face down and are basically out of the game – at least for a while.

The thing is, each creature also has a specific ability, which you can trigger as you place the tile. One creature allows you to move tiles one space along, another allows you to turn facedown tiles face up again, another lets you pick up a faceup tile and put it back into your end, etc. So if you play the right creatures in the right order and in the right place, you can manoeuvre previously placed in such a way, that your tile chain gets much longer than would otherwise have been possible with the tiles you have alone.

That’s what makes this game so interesting to people who like tactics or combos in games. When you play Kombo Klash for the first time, you’re simply trying to make your own chains, not thinking much about tactics, but the more you play the game, the more you realize that playing tactically can actually be of huge benefit. It’s not just a simple matter of playing your tiles, but checking what’s already on the board and getting things lined up just right for you, while not leaving the next player some easy points.

In fact, sometimes it’s better to play just one tile, which is the minimum you have to play on your turn, so that you can collect a better hand of tiles for your next turn. There are other things as well, that make the game really quite thinky, which, as I say, will appeal to more strategic players.

Yet, at the same time, you don’t have to play tactically, of course, which means it appeals to such a wide range of play styles and experiences.

There is also a small memory element to the game. Whenever you score your chain of tiles, you turn them face down, and nobody is allowed to peek at any facedown tiles. So if you want to get a really long chain, you may sometimes have to remember where certain tiles are, so when you flip them over with one of the creature abilities, you have your matching tiles right next to it. Get that wrong and your turn may be spoiled.

However, it’s a relatively small part of Kombo Klash, so don’t worry if you don’t like memory elements in games. I’m not a fan of them, but I really enjoyed the level to which you have to remember tiles in this game. It created a couple of memorable moments when I thought I knew where a specific tile was, only to realize that I got it wrong when I flipped it face up.

As I mentioned above, Hub Games aims to make games inclusive and in the case of Kombo Klash, I’m talking about all the components being double-coded. The score trackers are different colours and different shapes. The creature tiles have different background colours, but also show a different animal and additionally, there is a different symbol in the top left corner of each tile that represents that special ability the creature has. All the colours are contrasting as well, so even if you have no colour vision at all, you should be able to play the game very easily.

Another plus point, at least for me, is how small the game box is, but what’s even better is that the game board is made from cloth, so you can actually package everything up even smaller, if you want to. You end up with a stack of cardboard tiles, a cloth mat and four small wooden score tracking tokens. That’s really neat. Cardboard game boards usually define the minimum size of a game, but with a cloth mat, which you can easily fold up, you can make it even smaller.

So if you like a quick, fun game, where you can create huge combos to score huge points, then Kombo Klash is definitely for you.