I know, it’s not yet Christmas, but bear with me on this one. Cracker Games by The Dark Imp is now live on Kickstarter and is scheduled to reach backers in December, before Christmas. So, yes, lead times are a bit longer. However, even if you’re not in the mood for the festive season, the Cracker Games are worth checking out, as you’ll see in my review below. 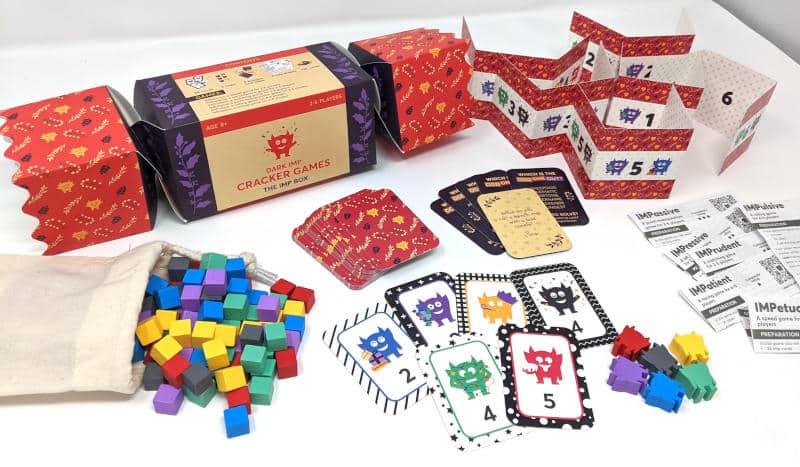 Cracker Games is a collection of six, small, fun, quick, family-friendly games that come in a box that is shaped like a Christmas cracker, as the name suggests. The packaging is really nice and looks wonderful on the table, just like a traditional cracker would. It’s jam-packed with wooden components, a deck of small cards, some cardboard player shields and of course, the rules, which are tiny double-sided sheets. You can see more in my unboxing video.

The games cover player counts of anything from two players, if you are sitting down for a romantic meal as a couple, all the way up to six players, which should suit most families, unless you’ve invited three generations round for Christmas.

The games also cover a wide range of game types and difficulty, so there should be something for everyone. In fact, you should be able to find two games that you can play at the same time, using the shared components that come in the box. So if you want to split up into two groups, you should be able to do that, which means you can probably cater for up to 12 people playing all at the same time and with only needing one Cracker Games cracker.

I was unable to try out the games IMPulsive and IMPatient, because they require a minimum of four players, but I did play the other four games that come in the box, IMPetuous, IMPressive, IMPrudent and IMPassive, which require only two players, but can also be played with up to six people.

IMPetuous is a speed game where you try and match cards. It’s a bit like Memory, but at a much faster pace and rather than matching two tiles with the same image, players turn over a number of cards, depending on player count, all at the same time and try to find whether most of the cards have the same number, colour or pattern on them. The first to shout it out correctly gets those cards and new ones are drawn until the cards are gone. It’s a frantic mess of flipping cards, checking what’s on them and trying to be the fastest. It plays very quickly and is a lot of fun. It’s also very easy to learn, so ideal for playing after a large Christmas dinner.

IMPressive is a set collection game where you take turns and draw cards from an offer row or the top of the deck to try and get the most sets of the same colours, numbers or patterns, a bit like you do in IMPetuous. The twist comes that the cards in the offer row get more valuable further along, with the first card being free. You put wooden cubes as payments on any cards you skip in the row, very much like you do in Small World. If you take a card that has cubes on it, you get those cubes.

That mechanism creates a lovely mini economy, because you only start with some many cubes, forcing you to think about when to spend them. Sometimes it’s better to spend your cubes to get the card you really need to grow your sets and score more points, while other times it’s best to wait for the cards in the row to become cheaper, allowing other players to snap them away from you.

IMPrudent is a lovely little matching game. You use the same deck of cards as with the other two games above. Players start with a hand of those cards and then the top card of the remaining deck is revealed. In turn order, players now have to play as many cards from their hand that match at least one feature on the face-up card, which means the same number, colour or pattern. As long as your cards match one of those shown on the face-up card, you can play them, and the more cards match, the more cubes you get, which represent points. The first to 15 cubes wins.

Like in similar card games, if you can’t match anything, you draw another card from the draw deck, and if you can match something, the more cards you play that match, the less cards you draw afterwards. That way, if you’re making lots of points, you draw less cards, making it harder for you to match cards on your next turn and allowing others to catch up. I think that’s a wonderful mechanism, keeping everyone’s points tight and giving everyone the chance to win.

IMPassive is a very interesting point manipulation game and the game that has the highest complexity rating in the collection. However, it’s not actually that difficult, even though it probably takes one game to be able to formulate a strategy.

In IMPassive, there are six imps in six different colours and during the game players will be adding points, again represented by wooden cubes, to them, or move the cubes from one imp to another, which means the value of each imp changes constantly throughout the game.

Additionally, you have two cards in front of you that decide which of the six imps you get as points at the end. You start with two random cards, but during the game you can swap them with cards that you draw, allowing you to change which imps you score.

You’re constantly deciding whether you should just give your imp more cubes or swap allegiance to another imp that seems to be in the lead. You have to be careful though, because you don’t want to make it too obvious which imp you’re backing. If other players see what your’e doing, then they might interfere with your plans for their own benefit.

It’s really fun and even though it seems a bit complex to start with, once you’ve played a game, you know what you’re doing and on subsequent plays you know what to do to influence the final scores.

As I say, I’ve not played the other two games, IMPulsive and IMPatient, but reading the rules, they seem like really fun games too, adding to the mix of the types of games you can play.

All of the games benefit from more players, but the two-player games do also work with two people. Yet, if you get Cracker Games for a family Christmas, you should be able to get enough people to join you in the fun that this wonderful collection of games offers. I will certainly take it with me for Boxing Day lunch to play with my family, but even if this collection isn’t for you, I’m sure it’ll make a great present for a friend.

Oh, and if you’re still not convinced, then let me tell you that Cracker Games contains no plastic, consisting of wooden or cardboard tokens only. The games can also be played again and again, long after Christmas is over, and should last a very long time indeed.